Fiat Ducato Electric van to be on market in 2020

Fiat has unveiled its first Fiat Professional electric model—an elecric version of the Ducato—coming to showrooms during 2020. The Ducato Electric is available in all body variants with the same load volumes as the conventional Ducato, from 10m3 to 17m3, and the best payload on the market, up to 1,950 kg. 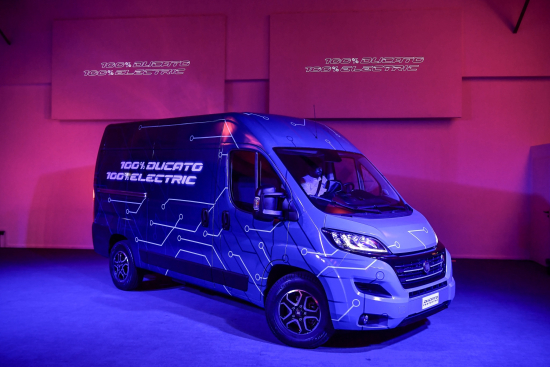 Ducato Electric will offer a choice of battery options for a total range of 220 to 360 km (NEDC cycle).

The Ducato Electric was conceived and developed on the basis of a specific, detailed study of customers’ real use of their vehicles, involving a year of data gathering, which confirmed that more than 25% of the market already has a “BEV Attitude” in terms of use, routes, dynamics and performances, and is therefore ready and waiting for a mobility change.

I do not know what the cost of this vehicle is but the total cost of ownership may be close to break even compared with a similar diesel vehicle as apparently BE transit buses have already hit the break even point. Once this happens, there will be a reasonable demand for these vehicles. They probably make more sense than BE private cars for reducing fossil fuel consumption.