ZF is launching a product offensive for hybrid and electric vehicles, active chassis systems, integrated safety, and automated driving. The Group will showcase its next-generation mobility solutions at the forthcoming IAA.

ZF is pursuing two directions in electromobility. It is laying the foundation for a new breed of battery-electric vehicles with its new 8-speed automatic transmission for hybridization.

The modular construction system enables mild, full, and plug-in hybrid drives to achieve top performances between 24 and 160 kW. The power electronics are no longer designed as a separate unit, but instead are fully integrated into the transmission housing without increasing the outer dimensions of the transmission. With a new, significantly smaller hydraulic control unit, ZF has created the required installation space for the electric and electronic components.

PHEVS. ZF estimates that at least 70% of all new vehicles in 2030 will still have an internal combustion engine. Nevertheless, a plug-in hybrid drive could considerably lower the engine’s CO2 emissions. This is contingent on electric range and electric power, both of which must allow for driving in everyday traffic with battery power only.

ZF has laid the foundation for this with the plug-in model of the new generation 8-speed automatic transmission. The electric motor has a maximum power of 160 kW and a continuous output of 80 kW. The maximum torque, which can be attained without actuating the internal combustion engine, is 450 N·m, thus allowing for swift passing, even in e-mode. 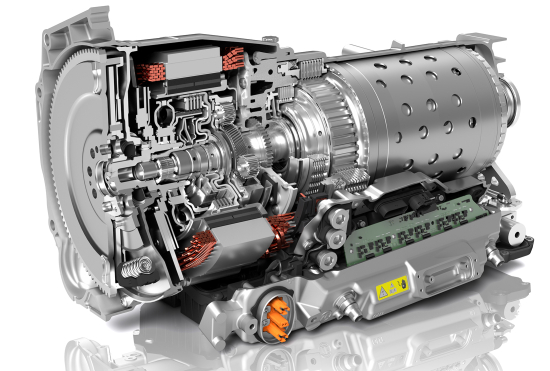 This does not require a significant increase of the packaging size since ZF relies on a new generation of internally developed electric motors and uses welded copper rods instead of coiled copper wire. This technology, known as the “hairpin technique,“ allows the copper fill level to be significantly increased, which has a decisive impact on the power density.

Mild hybrids. In addition to plug-in hybrids with high voltages of around 300 volts, mild hybrids will also play a big role in the coming decade. These have a voltage level of 48 volts and allow for considerable CO2 savings by generating power through regenerative braking recovery that can later be used as drive power.

Forty-eight-volt drives can be installed on several locations in the driveline. Installation on the crankshaft at the engine output (“Position 1”) and on the input shaft (“Position 2”) are particularly efficient. The new generation from ZF is suitable for both installation types. The electric motor can reach a maximum power of up to 25 kw and thus optimally support the internal combustion engine in virtually all operating parameters.

This is a great advantage to automotive manufacturers since hybrid drive assembly would no longer be considerably more complex than that of a conventional transmission. In addition, fewer high-voltage cables are needed in the vehicle, which enhances safety.

The engineers at ZF were faced with the challenge of fully integrating the power electronics into the transmission without increasing the outer dimensions. They achieved this through an ingenious cooling concept, as well as through several other developments.

The power semiconductors, especially the IGBTs for the high-volt model, produce a relatively high amount of waste heat. This is dissipated by connecting the power electronics to the refrigerant circuit of the vehicle‘s air conditioning system. However, the most important development was the considerable decrease in the size of the hydraulic control unit, which triggers mechanical shifts in the transmission.

The hydraulic control unit in the current generation of the 8-speed automatic transmission requires a volume of 3.1 liters, but in the next generation, it will shrink to 1.8 liters. This is made possible primarily by using direct shifting valves. In contrast to the electric pressure actuators that were previously used, these electromagnetic actuators no longer require additional pistons and bushings.

Intelligent adaptation. Each additional component of the new 8-speed construction kit was also intelligently designed for hybrid operation. This is clearly evident when it comes to the oil circuit.

Previously, two oil pumps were used: a very efficient vane cell pump driven directly by the internal combustion engine and a second electric pump and/or pulse memory for electric operation. In the future, a single power-split pump will be used.

When the internal combustion engine is shut down, it is driven by a small, directly attached electric motor. The mechanics of the new transmission system also contribute to efficient hybrid operation.

Although the body remains the same with four planetary gear sets and five shift elements, efficiency was further increased by fine-tuning the friction power. Due to this, CO2 emissions were lowered by one gram per kilometer during operation with the internal combustion engine. During electric operation, the range has increased accordingly.

Comfort. he new generation 8-speed automatic transmission is designed for lengthwise installation of the engine and transmission—a drive configuration that will be successful especially in the premium segment because it satisfies the high demand for comfortable operation and noise reduction.

Achieving this during hybrid operation is partly due to the solid mechanical foundation. Eight gears allow for transmission stepping of up to 8.6 with low gear steps, and thus low speed steps, over a wide speed range. In addition, the ZF-developed, centrifugal pendulum vibration absorber was optimized such that the driver barely feels the switch from electrical operation to operation with the internal combustion engine.

In the future, the transmission control module will no longer be based on characteristic maps, but rather on mathematical models of all system components. This is an important prerequisite for satisfying the growing complexity of future drivelines.

ZF will begin manufacturing the new generation 8-speed automatic transmission in Saarbrücken, Germany, in 2022. The market launch in China and the United States will follow shortly thereafter.

In parallel with its hybrid drive, ZF is working on improving purely electric drivelines. An important step is the world premiere of its electric two-speed drive system for passenger cars. This compact concept brings together an electric motor producing a maximum output of 140 kW (190 hp), a two-stage switching element, and power electronics. This can increase the range of each battery charge by up to 5% compared with a single-stage drive system.

The ‘Flying Carpet 2.0’ predictive chassis uses comprehensive sensors and smart algorithms to control suspension, braking, and steering systems. This largely decouples the vehicle superstructure from road unevenness and the dynamic effects of driving. As well as more comfort, it means better handling and safety. Comfort is key, especially in the development of fully automatic and autonomous driving, because it means that time spent in a vehicle can be used for activities such as reading and relaxing.

ZF’s complete systems include sensors and the ZF ProAI central computer in a range of performance levels. This makes ZF solutions scalable, flexible, and adaptable to a variety of market segments. That in turn allows car manufacturers to comply with the basic requirements of Euro NCAP 2022. And as ZF coPilot, it allows automated driving functions at SAE Level 2+.

ZF ProAI RoboThink is a high-performance version for people movers and cargo movers that enables Levels 4 and 5 autonomous driving. By acquiring WABCO, ZF aims to be able to provide complete automated driving systems for commercial vehicles as well.

You can see the gearbox companies are getting into hybrid drives as fast as they can - see also the Continental post a few days ago.
Both Mild (<=25 Kw) and full hybrids are produced.
All due to the EU's 95 gms/km specification.
lets hope they do not increase the price too much and can be used on less expensive cars like VW Gold and Ford Fiesta.
There is no point in building exquisite solutions that can only be used on a few 40-50K Euro cars, they need to work on the 16-20K ones where the mass market is.

Transmission companies should be working on hybrid,
great way to reduce oil consumption and clean the air.

PHEV is about to go from an exotic drivetrain in a few models to a regular option on almost everything, or even standard.

This means trouble for the oil companies.  BIG trouble.  And it couldn't happen to anyone who deserves it more.

The added cost of a separate electric motor is not insignificant. I can't really expect to pay the same price for a ZF transmission case with a 80kW electric motor but the increased cost could be significantly less than the cost of an ICE + electric motors + conventional transfer-case.

@Christos, that's it - how much extra does it cost.
+ do you really need 80 kw - 40 might be enough for nearly everything (if it is a PHEV).
If it is 2-4K euros onto the customer vehicle price, we could be in business.

On the other hand, some people are going to love love  LOVE having 160 kW of instant, silent power on tap.  Why not de-pollute the performance car?  There isn't enough lithium yet to let everyone drive a Tesla, but we don't need to be burning petroleum just to enjoy the driving experience.  We don't have to meet in the middle, we can get 80% of both sides!

Sent my entry in, reply same day; “Brilliant, Stuart, ok we will check the other entries & get back to you” Some weeks later ‘Sorry, you didn’t win ‘eAxis’ (note name change AFTER entry sent in’ So I asked ‘who won? “Freudenberg KG won 'eAxis' with ‘new ideas for cooling an electric motor'”

That is NOTHING TO DO with an eAxle (OR an ‘eAxis’, whatever that is)

zfs’ competition was a fake. They obtained my confidential Intellectual Property by fraud. I entered the eAxle competition with a ‘brilliant’ (THEIR DESCRIPTION) eAxle; they gave the prize to something TOTALLY unrelated. The Ravensburg Prosecutor General considers this kind of behaviour normal, apparently; I feel sad for my fellow inventors.

The ludicrous thing is that had zf bought it or licensed it, in good faith, their profits from it each day BEFORE MORNING TEA would have been more than the amount they have cheated me out of.

But the IP mafia can’t help themselves. Like cyborgs - MUST - DESTROY - INVENTORS -

The other ludicrous thing is that had the competition been FOR best cooling system for an EV motor, I would have won that too. My (first prototype) CPU Cooler shifts 6W/°C, 3 TIMES the next best.

I am at my wits end. I have had this kind of treatment from the IP mafia for best part of 40 years now. Many inventions; many awards. Success < 1%.

INVENTORS - DO NOT TRUST ZF!!!

For stat dec re veracity, and pdfs of screen shots email Stuart21 (at) mac (dot) com.

BTW, you Germans have liked my inventions before. Merc, you liked my '80s drive, (also world 1st, also said (by specs) to be impossible) but said that you already had 4 different systems, that management would not approve R & D on a 5th. You also liked it, Audi; but apologies, Jorg and Thomas, unfortunately I also won the Inventor of the Year Award that year, for an electronic invention. Thought I would get that into production, then use the profits to proto the drive. Never happened, electronic thingy bankrupted me and my father, & killed him. Thanks, IP mafia.

BTW2, Electric thingy invention (INVENTION OF THE YEAR winner, CES x 2, ++) was stolen by the EPO, stating "as there are no technical impediments to the implementation of your invention, it is therefore not unobvious!"

What I can't understand where the EPO found such neophyte examiners, oblivious to the fact that FOR A PATENT TO BE VALID, IT MUST BE WRITTEN such that THERE ARE NO TECHNICAL IMPEDIMENTS TO ITS' IMPLEMENTATION!!!

I would not disparage companies who deal in good faith.