The biturbo V8 in the Audi SQ8 TDI is the most powerful passenger car diesel engine on the European market. The SQ8 TDI reaches its electronic propulsion limit at 250 km/h (155.3 mph). Power transmission takes place via an eight-speed tiptronic and the quattro permanent all-wheel drive. 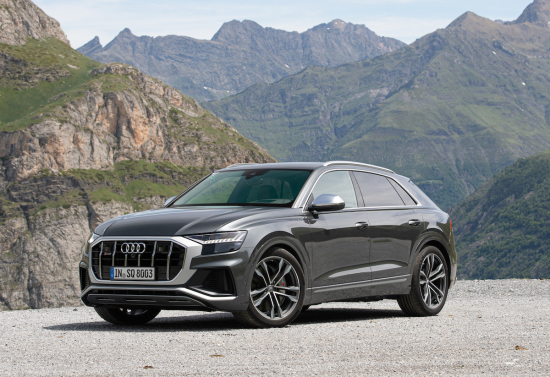 An electric powered compressor (EPC) supplements the work of the two turbochargers when starting off and when accelerating at a low engine speed, allowing the V8 TDI to always build up its power spontaneously. The EPC draws its drive power from a 48-volt electrical system, which is also the backbone of the mild hybrid system (MHEV). Its belt alternator starter can recuperate during deceleration and feed power to the lithium-ion battery.

In the cylinder heads of the 4.0 TDI that draws its power from 3,956 cm3 of displacement, the intake side is on the outside and the hot exhaust side with the two turbochargers is in the inner “V”. As a result, the gas travel paths are short, which enables spontaneous responding behavior.

The turbos, which build up to 2.4 bar of boost pressure (relative) are operated according to the principle of sequential turbocharging: Only one charger is active at low engine speeds; the second charger is activated at 2,200 rpm. To do this, the Audi valvelift system (AVS) opens the second exhaust valve in each of the combustion chambers, which was closed previously.

Layout of the turbocharging system.

Fully variable thermal management and sophisticated measures in the crankshaft and camshaft drive systems reduce the friction of the 4.0 TDI, which operates with more than 200 bar of ignition pressure in wide areas of the characteristics map. The common-rail system generates up to 2,500 bar of injection pressure.

The sonorous sound of the eight-cylinder engine is amplified by a sound actuator in the exhaust system, which drivers can adjust to their personal preferences via the Audi drive select system. The power of the V8 engine is emphasized by an engine cover specific to the S model series. Red applications flank the striking contours of the cylinder and visualize the air ducting. 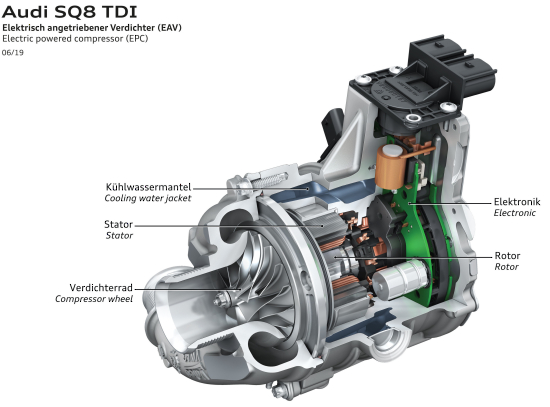 The EPC operates with a constant voltage of 48 volts. It is situated in the intake air path behind the intercooler and is active in the following two operating statuses: During start-up, the bypass closes and the EPC precompresses the air flow. This increases the filling of the combustion chamber. When driving, if the load requirement from the accelerator is high while the amount of energy available in the exhaust gas is low, the bypass flap closes and the intake air flows into the EPC, where it is compressed for the second time. A compact electric motor with an output of up to 7 kW accelerates the compressor wheel of the EPC to up to 70,000 rpm in approximately 250 milliseconds. 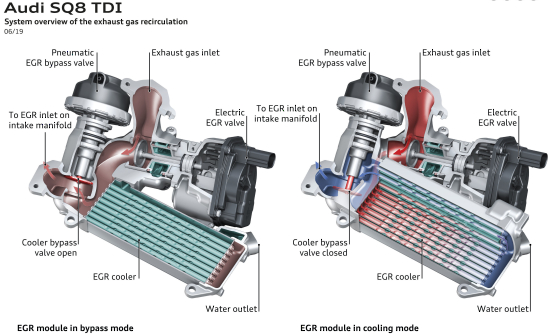 MHEV. The drive power for the EPC comes from the 48-volt main electrical system of the Audi SQ8 TDI, which is also the backbone of the mild hybrid system (MHEV). A compact lithium-ion battery with an energy capacity of 0.5 kWh serves as its energy storage unit.

The second major element of the MHEV system is the belt alternator starter (BAS), which is connected to the crankshaft. During braking, it can recover up to 8 kW of power and feed the energy into the battery. A DC/DC converter connects the 48-volt system and 12-volt electrical system.

The MHEV technology has the potential to reduce real-world fuel consumption by up to 0.5 liters (0.1 US gal) per 100 kilometers (62.1 mi). If the driver lifts off the accelerator at a speed between 55 and 160 km/h (34.2 and 99.4 mph), the Audi SQ8 TDI can, depending on the situation, either recuperate, roll at idle or coast with the engine deactivated for up to 40 seconds.

The BAS restarts the engine the next time the accelerator is depressed, and it does so faster or more gently than a conventional starter. Start-stop operation begins at a residual speed of 22 km/h (13.7 mph).

quattro drive with a sport differential as an option. The 4.0 TDI transmits its drive torque to an eight-speed tiptronic. Its two-mass flywheel integrates a torque-adaptive torsional damper that largely compensates the vibrations of the V8 diesel engine which occur just above idle speed. It thereby enables efficient driving in the low revolution range. Detailed solutions such as a clutch in the central transmission and an electric oil pump enable the automatic transmission to work together with the MHEV technology. 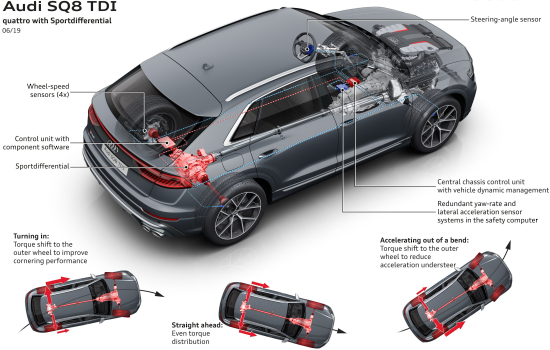 As in every S model from Audi, quattro permanent all-wheel drive comes as standard in the SQ8 TDI. In regular driving, it distributes the torque at a ratio of 40:60 between the front and rear axles, creating a sporty, rear-biased driving style. When necessary, the self-locking center differential transfers most of the drive torque to the axle with better traction. Up to 70% can flow to the front wheels and up to 85% to the rear wheels. At the cornering limit, the wheel-selective torque control rounds off the handling with minor brake interventions at the relieved wheels on the inside of the curve.

The sport differential, which Audi offers in the advanced suspension package, distributes the drive torque actively between the rear wheels. When turning or accelerating in a curve, they are predominantly steered toward the wheel on the outside of the curve—the Audi SQ8 TDI is literally pressed into the curve, eliminating even the slightest hint of understeer. In case of oversteer, the sport differential stabilizes the large SUV coupe by shifting torque to the wheel on the inside of the curve.

Call me a fanboy if you like, but to me, all this technical hype amounts to little more than trying to put lipstick on a pig.

Well, I'd think it depends were you intend to apply the lipstick; in the front or rear.

600+ foot pounds or torque, quite a machine.

The Germans makers seem to give their engineers the freedom to innovate; Let's see what they can do with EV drivelines.

Companies would not put this much effort into a "dying" technology if it were not necessary. As much as I want EV's to replace fuel powered vehicles, the difference in energy density between today's best batteries and diesel can't be ignored.

However, I'm not sure I see an advantage in thermal efficiency over Toyota's 41% TE gas engines.

Gasoline is hydro cracked, diesel is a distillate that can be made by hydrogenating plant oils.

Return of the dinosaur?

If you look at state-of-the-art for a 4-cylinder 2-liter engine, it puts out 245 (or 240 in some cases) hp and 500 Nm of torque. This is achieved with the (nowadays) more or less mainstream twin-turbo system. No need for any electric mumbo jumbo in the air handling system. It is a no-brainer to imagine that you could use two such banks and get 480-490 hp and 1000 Nm (albeit you would not need 4 turbos). You have to assess the progress of the Audi engine vs. this benchmark. Thus, I am not as impressed as some of the posters on this site.

I appreciate a well turned out team of percherons as much as any city folk, but I suppose I'm not enough of a gearhead to appreciate the technical achievements of this vehicle, but at the same time I fail to see what this vehicle is capable of, that a model x is not?

To me it looks like something that was pitched and proposed 4 years ago before dieselgate and now looks obsolete (to me at least) right from the get go.

I buy my cars used and often at auctions and I can't image anyone paying more than 15,000 for the Audi in 10 years when it has 200K+ km, whereas a similar used model x could fetch twice that in my expectation.

I note that the Audi does have the feature that you can tune the sound of the exhaust to the owners preference, which gives me the idea that you could mount speakers on the model x and play Wagner's "Ride of the Valkaries" as you swoop down the autobahn. Now that would be cool.

Back in the days the standard for safety was 42v. Now it appears to be 48v system (relative to ground!) which is more practical. My EE background wonders why we can't use 2 phase (+,-) 48v to yield a 96v operating system where current is not as heavy!
Anyone please!