Study associates arrival of ridehailing with 3% increase in traffic deaths

The arrival of ridehailing is associated with an increase of approximately 3 percent in the number of motor vehicle fatalities and fatal accidents, according to research from the University of Chicago Booth School of Business and Rice University. 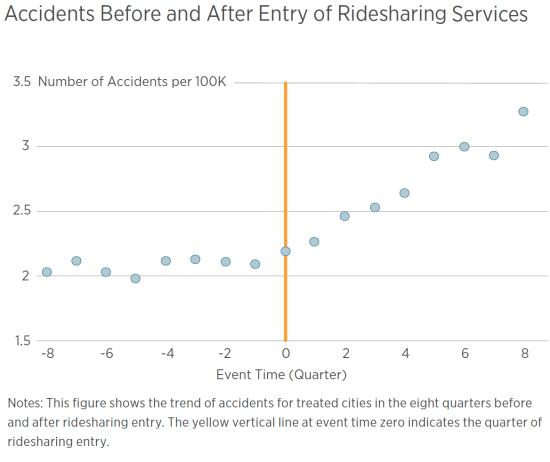 From the study, Barrios et al..

The researchers used the staggered roll-out dates from Uber and Lyft to review the eight quarters before and after ridehailing adoption in large US cities from 2001 to 2016—analyzing traffic volume, transportation choices and accidents to arrive at their conclusion.

The documented increase in accidents appears to persist and even increase over time, and that rate has stayed steady through weekdays, weeknights, weekend days and weekend nights, according to John Barrios, assistant professor at Chicago Booth, and Yale V. Hochberg and Hanyi Yi, both of Rice University, in the working paper, The Cost of Convenience: Ridehailing and Traffic Fatalities.

For perspective, while in 2010 the number of roadway deaths in the US stood at 32,885 (the lowest level since 1949), that number increased to more than 37,400 in 2016. The authors find that the introduction of ridehailing services in 2011 accounts for roughly 3% annual increase in auto deaths nationwide, or 987 people each year.

Economic theory and the data point to many reasons for ridehailing’s contribution to the growth in traffic fatalities. Ridehailing has put more cars on the road, and that has meant more accidents, injuries, and deaths involving drivers, passengers, bikers, and pedestrians, the study says.

The most significant increase in accidents occurred in larger cities, which saw a rise in new-car registrations when ridehailing was available, despite having public-transportation systems. Meanwhile, in cities that have introduced ridehailing, bike and pedestrian fatalities from accidents involving cars have increased at a similar rate to all driving fatalities.

Surveys report that fewer than half of [ridehailing] rides in nine major metro areas actually substitute for a trip that someone would have made in a car.

Also, Uber and Lyft need to keep large numbers of cars on the roads so they can get to riders quickly. Thus, the companies subsidize drivers to stay on the road between fares. As a result, ridehailing drivers are often driving alone as they search for riders, resulting in more cars on the road than usual at any given time.

Finally, the researchers quantify the financial costs of the additional fatalities. Based on US Department of Transportation estimates for the value of a statistical life, they found fatalities due to ridehailing amount to about $10 billion. That figure does not include costs from non-fatal accidents.

While the authors note that ridehailing benefits are undeniable, such as providing safe and affordable transportation options, more carpooling for riders, and job opportunities for drivers, they emphasize that, “still, the annual cost in human lives is nontrivial.” Instead, they view the essential contribution of their study as “pointing to the need for further research and debate about the overall cost-benefit tradeoff of ridehailing.”

Interesting study. Yes, indeed, on the roads you need to be as careful as possible so as not to get into trouble. Once I did a similar study for college, I ordered it on uk essay - this is an excellent lab reports writing service where you can order the execution of absolutely any task - an essay, course, research, etc. Excellent exit for the student in any situation.

Essay writing services are so good, they help cheat to a good grade without doing work it is so easy. It is the best way to cheat so BUY YOUR ESSAYS NOW from uk essay !!!