Milan awards Solaris contract for up to 250 electric buses

The Milan, Italy carrier ATM Milano intends to phase out diesel buses by 2030. An essential milestone on this path was the launch of a tender for the supply of up to 250 electric buses with a total value of up to €192 million. ATM Milano has selected Solaris as the supplier. The delivery of the first batch of 40 buses is to begin in June 2020. 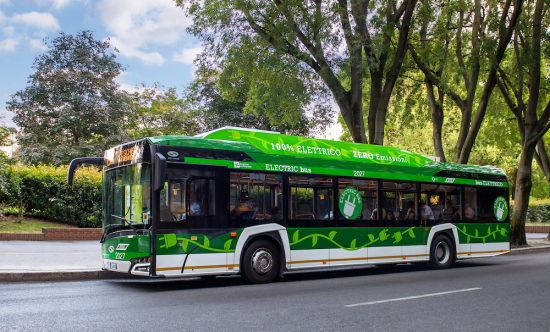 The buses selected by Milan—Urbino 12 electrics—are a flagship product of Solaris. Proving its reliability every day on the streets of dozens of European cities in 17 states across the continent, this particular model won in 2017 the “Bus of the Year 2017” title.

The 12-meter Urbino electric will be equipped with batteries of the Solaris High Energy type with a total capacity of more than 240 kWh. The electric power in those batteries will be recharged by means of an inverted pantograph—i.e. a device lowered from the charging pole to the vehicle roof, and a classic plug-in device in the bus depot. The drive unit will consist of an electric axle with two integrated electric engines of 110 kW each.

The air-conditioned passenger compartment can fit up to 82 people, of whom 26 are seated. The vehicle will be adapted to the needs of persons with disabilities: a functional bay and 14 seats accessible from the low floor will facilitate the travel.

150 Solaris buses, including 25 with an electric drive, are already in use in Milan. So far, Solaris has supplied more than 40 battery buses for the Italian market. Apart from Milan, they were bought by operators from Bergamo and Bolzano. Moreover, Bolzano will have 12 Solaris hydrogen buses delivered in 2021.

Oh the irony. In the late 50ties and 60ties electromotion in public transport was retreating because Diesel powered buses were more flexible. Now it is the other way around.