Researchers at George Washington University led by Prof. Stuart Licht (earlier post) report a process for the high-yield, low-energy synthesis of carbon nano-onions (CNOs) by electrolysis of CO2 in molten carbonate. A paper on their work is published in the journal Advanced Sustainable Systems. 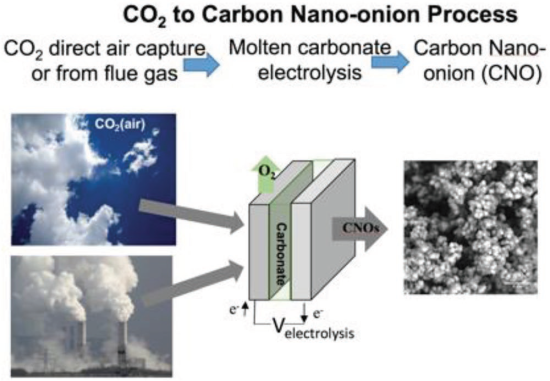 High yield electrolytic synthesis of carbon nano-onions from CO2, either directly from the air or from smoke stack CO2, in molten carbonate. Liu et al.

Carbon nano-onions are a recently recognized, less-studied morphology of carbon nanomaterials consisting of nested concentric carbon spheroids (concentric nested buckyballs). The first observation of the structures appears to have been in 1980, and the first synthesis—using intense electron-beam irradiation of soot—in 1992.

Carbon nano-onions have a range of remarkable applications, but these applications have been largely ignored due to their high synthesis cost. Closely related morphologies of molybdenum and tungsten diselenide nested fullerenes and their lubrication properties have driven sales of thousands of tons per year of these alternative inorganic fullerenes. Carbon nano-onion applications often focus on the confined, high surface area of chargeable surfaces or symmetry of the CNO morphology.

Examples include nano-onion ultrahigh power super capacitors with unusually high charge storage due to the ease with which ions can access the active material, maximum anodic capacity lithium batteries, increased capacity gas, and energy storage materials with a high 984.3 m2 g−1 specific area, increased activity in heterogeneous catalysis such as for styrene oxidative dehydrogenation of ethylbenzene to styrene, and CNOs were employed as the support for Pt in direct methanol fuel cells outperforming Pt/Vulcan XC-72 in the electro-oxidation of methanol.

CNOs are currently valued at more than $1 million per ton, according to the researchers.

Now, the researchers instead achieve effective low energy CNO synthesis from CO2 by excluding those nucleating agents from the molten carbonate growth medium. This exclusion of transition metal nucleation agents inhibits CNT growth but results in a profusion of uniform CNOs, with an increasing diameter correlated to increasing growth time.

The source of CO2 to produce CNOs can be industrial flue gas, or direct air carbon capture.

The researchers estimate the upper-bound cost of the new chemistry of CNO production by molten carbonate electrolysis—excluding anode costs to be determined—to be $1,000 per ton. This is several orders of magnitude less than alternatives.

The team said that future studies will explore inexpensive anodes for use in the CO2 electrolytic growth of CNOs, and also explore application-level material testing of the charge storage, electrochemical, and tribological properties of CNOs from CO2.

Rather than carbon taxes or extended debates on the necessary international path to combat global warming, transforming the greenhouse carbon dioxide to a valuable product incentivizes its “mining” and removal, either from industrial flue gas or directly from the air.

Sounds good to me.

I was hoping for advances in CNT synthesis that would make them cost-competitive with metallic conductors, but this is good too.

nano-onions
I believe the word is "anion".

It is kind of like an "onion". Basically, a multi-layer fullerenes, e.g. graphene, also known as carbon nano-onions (CNOs). Also good for lithium ion batteries.