In the product launch event, Yang Hongxin, General Manager of SVOLT, said that the NMx battery cell rivals the NCM811 cell in performance, while reducing the cost of materials by 5%-15% and the cell balance of materials (BOM) cost by around 5%, and allows the materials to rise above strategic resources.

The NCMA material not only outperforms NCM811 in cycle life, but also exhibits better resistance to heat, the ability to generate less gas and greater safety, which translates into higher capacity, longer cycle life and better safety performance in the final products, the company claimed.

Based on a global mindset, SVOLT also announced its plan to build a base in Europe. Two billion euros ($2.24 million) will be invested to build a 24GWh battery factory, a factory for cathode materials and a battery technology center. It will also integrate its 6 manufacturing bases around the globe into its AI factory construction plan. 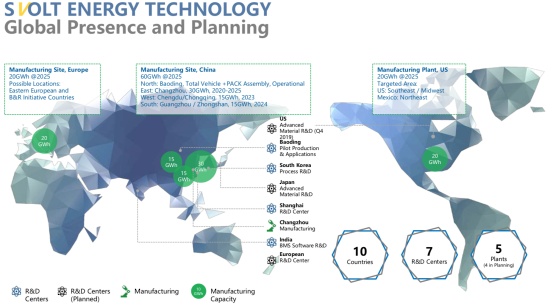 SVOLT is primarily focused on the electric vehicle battery business, embracing an open supply to automakers around the world. Since its establishment, SVOLT has been committed to the product development based on the high-speed stacking technology of prismatic batteries and automotive grade standardization.

The high-speed stacking process is the new generation of battery technology that breaks the bottleneck of winding processes of batteries. SVOLT aims to finish stacking one cell in 0.25 seconds in one single station. In contrast to the same type of winding process, the energy density of SVOLT stacking batteries improves 5%, the cycle life improves 10% and the cost reduces 15%.

SVOLT started its cell pre-research work in 2012, and became independent in February, 2018.

SVOLT plans for 7 R&D centers around the globe, with four currently in operation, in Baoding, Korea, Shanghai and India, and three are under construction in the US, Japan and Wuxi. Domestically, SVOLT’s factory is under construction in Changzhou, Jiangsu, which will be operational by the end of 2019 with SOP in February 2020, and will have a capacity of 12GWh in 2020.

Considering latest demonstrated achievements by China, it may very happen sooner than expected. It could push China ahead in near future lower cost EVs,

It's interesting to note the first production Leaf batteries were 141 Wh/kg and now we are talking about pushing 265 Wh/kg for current batteries...8 years later.

Yes a 88% gain in battery performance in 8 years is pretty good.