Rio Tinto facing up to $1.9 capex overrun, up to 30 month delay in Oyu Tolgoi copper mine project

Rio Tinto advised that it now expects that the development capital spend for the Oyu Tolgoi copper mine project in Mongolia will range from $6.5 billion to $7.2 billion—an increase of $1.2 billion to $1.9 billion from the $5.3 billion previously disclosed.

Rio Tinto plans to have Oyu Tolgoi become one of the largest copper mines in the world. Since February, key below-ground infrastructure such as the control room facility and the jaw crusher system are now complete and construction of shafts 3 and 4 is progressing. The commissioning of shaft 2 remains on track for October 2019.

However, the company noted, as it previously advised, enhanced geotechnical information and data modeling suggests that there may be some stability risks identified with the approved mine design. Therefore, the company is exploring other mine design options. These options may result in some of the critical underground infrastructure—such as the mid-access drive and the ore handling system—being relocated or removed. Options relating to the sequence of crossing the panel boundaries during mining operations are also being analyzed.

These options are being evaluated to determine the final design of the first panel of mining, “Panel 0”, and this work is anticipated to continue until early 2020. Given the further technical work which is needed, the Definitive Estimate, which will include the final estimate of cost and schedule for the remaining underground project, is now expected to be delivered in the second half of 2020, reflecting the preferred mine design approach.

Depending on which mine design options are adopted, first sustainable production could be achieved between May 2022 and June 2023, a delay of 16 to 30 months compared to the original feasibility study guidance in 2016. This range includes contingency of up to eight months reflecting the unexpected and challenging geotechnical issues, complexities in the construction of shaft 2 and the detailed work still required to reach a more precise estimate. 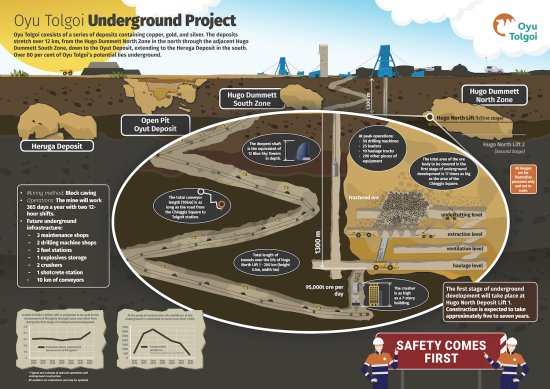 Background. Situated in the southern Gobi desert of Mongolia, approximately 550 kilometers south of the capital Ulaanbaatar and 80 kilometers north of the Mongolia-China border, Oyu Tolgoi is jointly owned by the Government of Mongolia (34%) and Turquoise Hill Resources (66%, of which Rio Tinto owns 51%). Since 2010, Rio Tinto has also been the manager of the Oyu Tolgoi project.

To this point, all of Oyu Tolgoi’s concentrate has been produced using ore mined from the surface using open pit mining. However, the majority of the value of Oyu Tolgoi—up to 80%—lies deep underground. To access this part of the resource, underground mining techniques will be used at depths of more than 1,300 meters.