Lotus unveiled its electric hypercar, the Evija, formerly called the Type 130 (earlier post). Carrying a starting price of €1.7 million (US$2.1 million)—plus duties and taxes—the Evija is intended to be the most powerful series production road car ever built with output of 2,000 PS and 1,700 N·m. 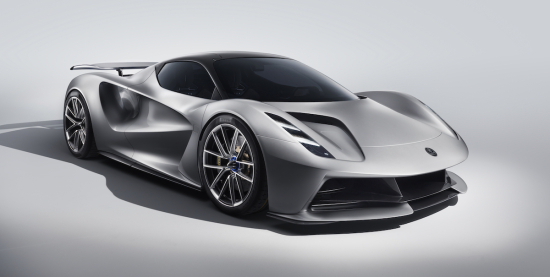 The Evija is the first hypercar from Lotus, and the company’s first model with an electrified powertrain. It is also the first completely new car to be launched under the stewardship of Geely.

Production is limited to not more than 130 units, making it among the most exclusive cars ever launched. It’s a figure set in tribute to the car’s project code, Type 130.

The all-electric powertrain was developed with technical partner Williams Advanced Engineering (WAE). Key to the exceptional power output is the 2,000 kW lithium-ion battery, supplied with its management system by WAE as part of a joint venture with Lotus to collaborate on advanced propulsion technologies. WAE won a 2018 Queen’s Award for Enterprise for translating its EV expertise from the race track to road-going vehicles.

The battery pack is mounted centrally behind the passenger compartment, and its cover is visible through the glass rear screen. This positioning delivers significant advantages in terms of styling, aerodynamics, packaging, weight distribution, occupant comfort and dynamic handling. It also supports fast and convenient servicing and maintenance. Furthermore, the set-up has been designed so that in the future alternative battery packs—for example, to optimize track performance—can be easily installed.

Power is fed from the battery pack to a bespoke in-line axial arrangement of two high-power density e-motors. These feature integrated silicon carbide inverters and epicyclic transmission on each axle of the four-wheel drive powertrain. The motors and inverters being supplied by Integral Powertrain Ltd.

Four exceptionally compact, extremely light and highly efficient single-speed, helical gear ground planetary gearboxes transfer power to each driveshaft. Measuring a mere 100mm in depth, each gearbox comes packaged with the e-motor and inverter as a single cylindrical Electrical Drive Unit (EDU), with a target power of 500 PS per e-motor.

Torque-vectoring, enabled by the four e-motors, provides exceptional dynamic response and agility on the road. This fully automatic, self-adjusting system can instantly distribute power to any combination of two, three or four wheels within a fraction of a second. In Track mode the ability to add more power to individual wheels enables the radius of corners to be tightened, potentially reducing lap times.

The Lotus Evija is equipped with ESP stability control to ensure safety in all road conditions, with further grip provided by the four-wheel drive system. A pure steering feel is assured via an electro-hydraulic system.

Power can be delivered over a sustained period. The car’s advanced aerodynamics and four-radiator cooling package keep the battery at an optimum temperature. It means that the Evija is capable of being driven flat-out with no derate for at least seven minutes in Track mode.

Through the partnership with Williams Advanced Engineering, the battery has the ability to accept an 800 kW charge. Although charging units capable of delivering this are not yet commercially available, when they are it will be possible to fully replenish the battery in just nine minutes.

Using existing charging technology—such as a 350kW unit, which is currently the most powerful available—the Evija’s charge time will be 12 mins to 80% and 18 mins to 100%.

The car is built on a one-piece motorsport-inspired carbon fibre monocoque chassis supplied by CPC. Constructed from multiple carbon plies, the manufacturing process is identical to that of an F1 chassis, and ensures the lightest, stiffest, safest and most technically advanced Lotus road car platform ever built. The total weight of the monocoque tub is a mere 129 kg.

This chassis, coupled with innovative engineering and clever packaging throughout every element of the Evija’s powertrain, has contributed to the class-leading target weight of 1,680kg in its lightest specification.

The Evija is the first Lotus road car to ever feature a full carbon fibre chassis. Moulded as a single piece for exceptional strength, rigidity and safety, the full length of the underside is sculpted to optimize downforce. It includes an integrated air diffuser which extends from under the B-pillars to the rear.

Active aerodynamics are deployed in the form of a rear spoiler, which elevates from its resting position flush to the upper bodywork, and an F1-style Drag Reduction System (DRS). Both are deployed automatically in Track mode, though can be deployed manually in other modes.

The absence of traditional door mirrors plays a part in reducing drag. Cameras integrated into the front wings are electronically deployed on unlock, while another camera built into the roof provides a central view. Images are displayed on three interior screens.

The Lotus 130 is the lightest production EV hypercar at 1,680 kg. Close to my prediction of 1435 kg. Of course 2000 hp is insane, though it had to beat the Pininfarina Battista which has 1900 hp and makes the NIO EP9 look anemic with only 1341 hp (1 MW). This is a £1.7 million hypercar so it is not suppose to be practical, only excessive in all regards.

The kind of car you want to rent for a day at the track and then let someone else pay to keep it running.