The eSMR Methanol technology exploits the full carbon potential of biogas by utilizing the 40% CO2 content which is routinely separated and vented today. The technology heats the process using green electricity from wind turbines or solar panels instead of natural gas.

The demonstration plant will be located at Aarhus University’s research facility in Foulum, Denmark, and receives funding from EUDP (Energy Technology Development and Demonstration Program).

We look forward to repeating the very promising results we have achieved in the laboratory at an industrial scale. We want to show that sustainable methanol can be produced from biogas at a cost similar to that of traditional methanol produced from fossil fuels. The eSMR Methanol technology is about 100 times smaller than the traditional units which makes it a very attractive solution for decentral biogas sites and world scale producers alike.

Today, biogas in grid quality is much costlier to produce than the natural gas it replaces. If biogas producers can produce sustainable methanol instead, they will be able to increase their production value significantly and compete on commercial terms with fossil-based products. Methanol is used as a clean fuel or an important intermediary in the production of many chemicals and polymers (plastics).

The eSMR Methanol process is CO2-neutral when based on biogas as feedstock and green electricity for heating. It even utilizes the CO2 that makes up about 40% of biogas and typically is costly to separate and vent in production of grid quality biogas. 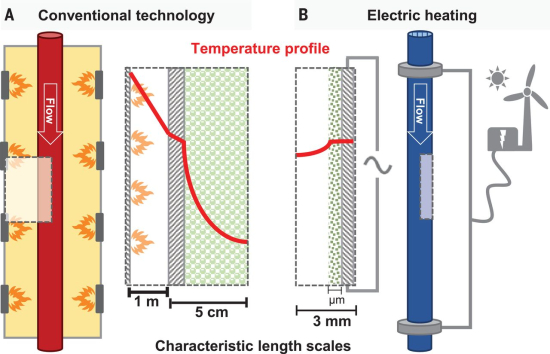 Heating principles. (A) Conventional fired reactor. (B) Electric resistance–heated reactor. Characteristic radial length scales and temperature profiles are shown across the heat source, reactor wall (gray), and catalyst material (green). In (B), the heat source and reactor wall are one. Illustrations are not to scale. Wismann et al.

eSMR Methanol is based on Topsoe’s eSMR technology. The technology produces synthesis gas (syngas), an essential building block in production of polymers and chemicals. It may reduce the traditional steam reforming unit found in most chemical plants from the size of a six-story building, 30 meters in length, to just a few cubic meters. The extremely compact technology replaces the natural gas-fired heating of traditional steam reformers with direct electric heating of the catalytic process. 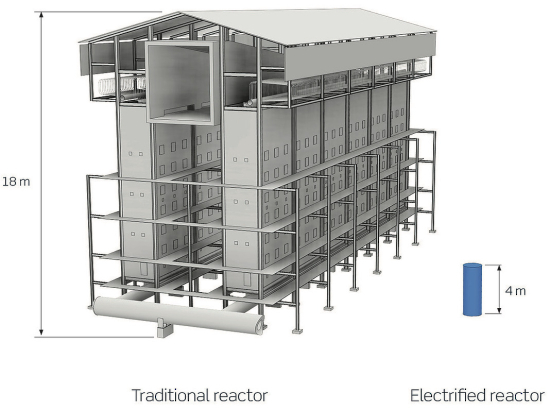 We see the electrified reactor as the next logical step for the chemical industry. With this approach, producers get a viable way to transform the industry going towards greener processes without increasing production cost.

The linked paper regards methane reforming to hydrogen, not to syngas per se.  It does not reference CO2 in the feedstock.

In addition to purification, there's also the small (!) matter of storage here.  Biogas typically contains hydrogen sulfide and is generally produced at whatever rate the biological process wants to.  Matching this uncontrolled production rate with an as-available supply of electricity for reforming is going to require storing both the CO2 (relatively easy) and methane (considerably harder) components of the feedstock.  That's going to add both capital and operating expense.

Bio methane sounds promising, but we do not have much of it.
The U.S. uses more than 250 billion therms of fossil methane,
we produce much less bio methane.

BIO Gas = Bovine Intestinal Output Gas
Perhaps it could be easily captured and concentrated using a tent that siphons the lighter methane gas from the top.

Biogas has several sources in addition to Agricultural Biogas produced from wastes, these include Landfill Gas, Biogas from waste water, and synthetic gas from wood biomass.
E-P points out some important issues with Biogas which is a combination of methane, carbon dioxide, nitrogen and other components. Haldor Topsoe also has products that handle the purification of Syngas.
It should also be pointed out that Topsoe’s eSMR technology can be used for Ammonia production as well as Methanol.

It should be pointed out that according to the U.S. Energy Information Administration that energy from Biomass is the largest source of renewable energy in the US.
Of course, this might have to do to the 15,000 Pit BBQ restaurants in the US.

There is technology available to reduce hydrogen sulfide. It is routine in plants where biogas is upgraded to a quality similar to natural gas. It is not much of a technology challenge, just an incremental cost.

Somewhat beyond the article, I wonder why biogas is not used to replace natural gas in power plants. This would be much easier than trying to make an automotive fuel of biogas (gaseous or liquid). A large marine diesel engine is rather tolerant of fuel quality and requires less fuel upgrade than automotive engines. (Gas turbines are not that picky either but they are normally too big for a biogas plant and small gas turbines are not as efficient as diesel engines.) For example, you have some CO2 in the raw biogas. This implies charge dilution, just as EGR and excess air. Large marine engines operate at high levels of excess air and also have a high tolerance for EGR and CO2. It is just a matter of engine control to use a "less upgraded" biogas. Moreover, you would also utilize all kind of waste heat and obtain a total efficiency of over 90% (which cannot be utilized to such extent in a vehicle, albeit that some waste energy can be used for cabin heating. This is no rocket science since you a container with such an engine is commercial today. Moreover, dual fuel and single (gaseous) fuel versions of such engines have been available for many years and the gen-set has similar electric efficiency (we are talking close to 50% here) as the corresponding (single fuel) diesel engine.

gryf,
Biomass and biogas are different sources of energy. Biogas is no where near the energy source compared to biomass. Biomass includes the 10% ethanol we make which amounts to over 10 billion gallons per year in the U.S.

A good source of information on biomass and biogas can be found here.

11.5 billion kilowatthours (kWh) of electricity, or about 0.3% of total U.S. utility-scale electricity generation in 2017...

It does not produce much electricity and is less than 1% of the natural gas we use. This does not mean it should not be done, but we need to be realistic.

From the U.S. Energy Information Administration,
U.S. natural gas production in 2017 was the second-highest level recorded. Most of the production increases since 2005 were the result of horizontal drilling and hydraulic fracturing techniques, notably in shale, sandstone, carbonate, and other tight geologic formations.

Natural Gas in 2019 is the number one energy source in the US mostly thanks to unconventional gas resources discovered after 2005, something I learned in 2006 when I worked in Texas (at that time most people thought we were running out of Natural Gas).

Recently, I read about another unconventional natural gas source from the Center for Biogenic Natural Gas Research at the University of Wyoming. They are looking into innovative technologies that would bring economically depleted hydrocarbon reserves back into production and extend their productive life, e.g. as the Powder River Basin where the University is near. They have a recent paper written in the journal Nature "Low carbon renewable natural gas production from coalbeds and implications for carbon capture and storage" 9/18/2017 you can read it here.
You never know what could happen.

Correction - Petroleum is still number one in 2019, Natural Gas second.