Queen’s University Belfast researchers have discovered that the scaly-foot snail, otherwise known as the sea pangolin, is the first species at risk of extinction due to potential deep sea mining by humans. The research is published in Nature Ecology & Evolution. 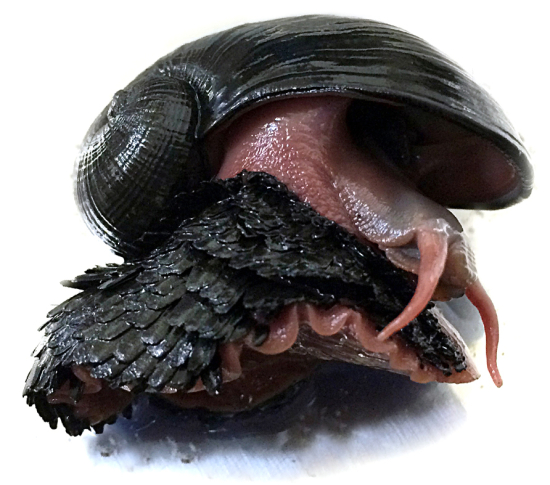 The scaly-foot snail. Chrysomallon squamiferum, also known as the sea pangolin, displays unique iron-infused scales. The species has recently been listed as ‘Endangered’ on the IUCN Red List.

Over the past three years, the Queen’s team has been contributing to the first official Red List assessments of animals living in deep sea hydrothermal vents in the Indian Ocean.

Last week, the global The International Union for Conservation of Nature (IUCN) Red List of Threatened and Endangered Species—recognized worldwide as the definitive conservation authority—included the scaly-foot snail, as the first species listed as endangered from deep sea mining.

The deep sea is home to thousands of species and new species are being discovered all the time. These deep sea marine animals like the scaly-foot snail are out of sight, out of mind, but they are still threatened by human activities.

The deep sea, more than half the world’s surface, contains more nickel, cobalt and rare earth metals than all land reserves combined. Mining corporations argue that deep-sea exploration could help diversify the supply of metals, including cobalt for electric car batteries. The demand for copper, aluminum, cobalt and other metals, to power technology and smartphones, is also soaring.

New technology is currently underway to start mining the seafloor, miles below the surface, targeting the same areas that are home to some of the world's rarest, strangest, and most vulnerable, animals.

It is crucial we are aware of the immediacy and potential impacts of deep-sea mining.This Red List designation for these species will enable appropriate international protection for the most vulnerable of creatures.

The research project involves international colleagues from Japan, Ireland, and the UK and was funded by the Mohamed bin Zayed Species Conservation Fund.

I think there is more risk to species from pollution from runoff and garbage from third world countries, put into rivers and oceans, than from mining. Just sayin'.

Let's be more careful. Most garbage in oceans can be traced to 20+ industrialized countries.

Most plastic in the oceans traces from a handful of countries in Asia and Africa, which are NOT the primary producers thereof.

If the Turd World did not volunteer to "recycle" the effluent of the First World for money, the First World would have dealt with this already.  There are ways, but others have received money for claiming to do so, and not doing it.