Audi is adding the Q3 Sportback compact SUV in coupé shape to its model range. For the market launch in Europe, a gasoline and a diesel engine are available. With 169 kW (230 metric hp), the 2.0 TFSI is the most powerful engine. The 2.0 TDI has an output of 110 kW (150 metric hp). Shortly after market launch, it will also be available as a manual transmission with a quattro drive. 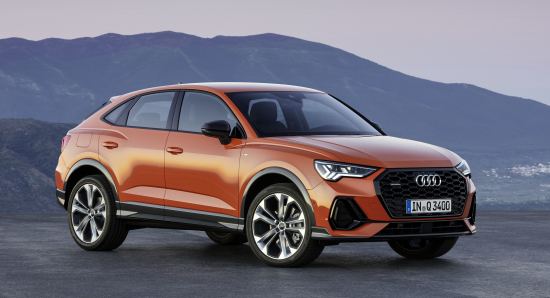 Additional engines will follow in the course of the year, including a more powerful diesel and an entry-level gasoline engine, which works together with a 48 V mild-hybrid system. During deceleration, it recovers energy; during acceleration from low speeds, it supports the engine. In real-life driving, it can save up to 0.4 l of fuel per 100 km (62.1 mi).

In the top engines, the quattro all-wheel drive takes on the job of force transmission as standard. Its central component is a hydraulic multi-plate clutch on the rear axle. Its electronic management combines outstanding stability and strong traction with a high level of driving enjoyment. At the limits of performance, the quattro drive works closely together with the wheel-selective torque control, It makes handling even more dynamic and stable by means of gentle brake interventions on the inside wheels with the quattro drive and the inside front wheel with the front drive.

The Audi Q3 Sportback features progressive steering as standard—the gear ratio becomes increasingly direct as the steering angle increases. On request, the suspension is available with damper control, which further increases the range between dynamism and comfort. Depending on the driving situation, road condition, and personal preferences, the driver can vary the car’s characteristics via the standard dynamic handling system, Audi drive select, in six profiles, including the offroad mode.

In addition to the engine and transmission set-up, this system also influences the electronically adjustable shock absorbers and the steering assistance. As an option, the hill descent control can offer support: it keeps the speed selected by the driver constant on an incline greater than 6%.

Digital world. The operating and display illustrates how Audi is pushing ahead with digitalization: Even the basic equipment includes a digital instrument cluster with a 10.25-inch screen diagonal, which the driver operates using the multifunction steering wheel.

In the top-of-the-line system, MMI navigation plus, the displays appear in the Audi virtual cockpit, which offers many additional functions. A touch display measuring 10.1 inches is positioned in the center of the instrument panel. When a function is selected, it emits acoustic feedback. Just like in the brand’s full-size class models, it is surrounded by wide, high-gloss black trim.

Together with the air-conditioning control unit located beneath it, the display is ergonomically tilted 10° towards the driver. On request, the 12.3-inch Audi virtual cockpit plus is available with three selectable layouts, including a particularly dynamic view.

The flat menu structure is complemented by a control unit that uses natural language and can also understand free wordings. Entering a navigation destination and the MMI search are based on free text input. The system recognizes the driver’s most frequent destinations based on previous journeys, allowing it to generate suitable suggestions. When doing so, it takes into consideration statistical empirical values regarding the traffic load and time of day.

Together with MMI navigation plus, the online services of Audi connect are made available on board at LTE Advanced speed via a permanently installed SIM card. This includes, for example, online traffic information and the online points of interest service, which complements route guidance with photos, opening hours, and user evaluations. Thanks to the inter-connectivity of the Audi fleet, the Q3 Sportback receives and provides information about parking spaces on the roadside, hazard areas, and speed limits, which are detected via the on-board camera and vehicle sensors.

Traffic light information is a new feature among the Car-to-X services. The car receives data from a city’s traffic computer, as a result of which the driver receives information about traffic light phases in the Audi virtual cockpit. This allows drivers to adjust their speed pre-emptively, which increases efficiency and improves traffic flow. This offering is initially available in individual European cities and will be gradually extended depending on the infrastructure in the urban area.

Assist systems. In the Audi Q3 Sportback, four standard systems are used for safety. These include the lane departure warning and the lane change warning. While the former helps the driver to remain in the lane, the latter points out critical situations when changing lanes, such as if there is a vehicle in the blind spot. The series scope in Germany also includes Audi pre sense front. If a head-on collision is imminent, it outputs a visual, acoustic, and haptic warning to the driver.

In an emergency, it causes full braking and initiates the Audi pre sense basic safety measures. This involves tightening the front seat belts, closing the windows and the optional sliding roof, and activating the hazard warning lights.

The adaptive cruise assist is a highlight of the optional systems. It takes the burden off the driver during longitudinal and lateral guidance. Ultra-modern systems such as the 360-degree cameras offer assistance with parking and maneuvering. They show the direct surroundings of the SUV coupé on the MMI display, and the driver can choose from several perspectives. The park assist automatically guides the car into and out of parking spaces. If, for example, the driver wants to back out of an entrance, the rear cross traffic assist warns about approaching vehicles that the system classifies as critical.

Delivery of the Audi Q3 Sportback in Europe will start in the fall. In Germany, the price for the 35 TDI S tronic is €40,200, while the 45 TFSI quattro S tronic is available from a starting price of €46,200.

...so if I drive 15,000 miles per year I might save up to a tank and a half of gas? Theses MH press releases always seem to confirm the hopelessness of mild-hybrid approach.

Let's face it internal explosive engines are obsolete; and we need to get to battery powered transportation as quickly as we can to counter the damage burning fossil fuel does to people's health and the planet.