A team at the University of Delaware has demonstrated a direct ammonia fuel cell (DAFC) prototype with a peak power density of 135 mW cm-2 at 80 ˚C. The DAFC employs an ammonia-tolerant precious-metal-free cathode catalyst (Acta 4020) and a high-temperature-stable hydroxide exchange membrane (HEM). A paper on the work is published in the journal Joule. 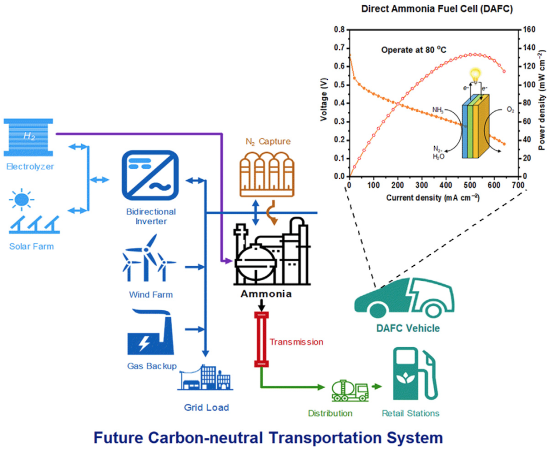 With recent and projected cost declines in wind, solar, and lithium-ion batteries, electrification using batteries has become a viable option for applications compatible with the inherent range limitations and recharging time. However, most air transport, military, shipping, and long-distance freight applications remain challenging for batteries because of their limited energy density. Even for consumer light-duty vehicles, particularly larger size passenger vehicles, limited access to charging infrastructure and/or the substantial recharge time may drive continued demand for alternatives. Together, these applications leave a substantial fraction of transportation energy usage dependent on chemical fuels.

Transportation power sources using biofuels would have been a good complement to batteries, as biofuels replicate most of the desirable properties of petroleum-based fuels. However, the scale of biofuels is limited by their environmental footprint, considering the land and water usage.

… Carbon-neutral fuels are needed for sustainable transportation to overcome the range and recharge limitations of batteries and the scale limitations of biofuels. The technical potential of wind and solar energy is vast, and such fuels are scalable beyond foreseeable needs. Hydrogen has attracted the most research and development interest due to the efficiency and performance of hydrogen-fueled proton exchange membrane fuel cells (PEMFCs). However, the challenges of transmission, distribution, and high-pressure storage of a low-density gas have hampered the adoption of hydrogen PEMFC technology. An alternative approach to hydrogen distribution infrastructure in transportation is using hydrogen-rich fuels based on carbon or nitrogen. 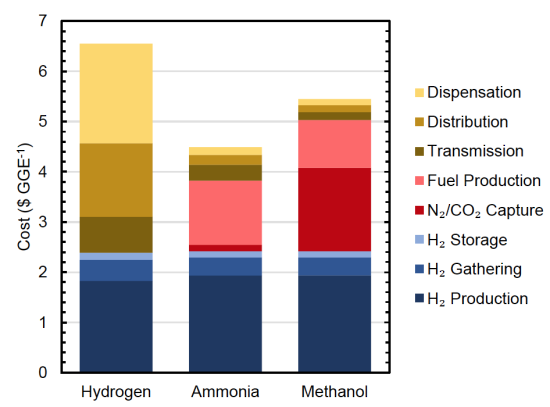 In an invited paper at the 233rd ECS Meeting in Seattle last year, the Delaware researchers noted that:

DAFCs-HEM sound attractive but they also have some significate drawbacks: first, the overall performance of DAFCs-HEM are rather low (≤11 mW cm−2) due to the lack of high-performance HEMs specially operating at ≥ 80 ˚C and the relatively sluggish AOR even on noble metals;second, the crossover of ammonia through the polymeric membranes is unavoidable, decreasing the OCV and efficiency. The oxidation of diffused ammonia at cathode may generate toxic NO because Pt not only serve oxygen reduction reaction (ORR) but also proceeds AOR.

The Delaware team identified two key factors for achieving high DAFC performance: the use of a PGM-free cathode catalyst of zero ammonia oxidation reaction (AOR) activity and an hydroxide exchange membranes (HEM) which is highly stable at 80 ˚C or higher.

Substantial improvements in performance are still needed for DAFCs to become a practical power source for transportation applications. Desirable developments include minimized crossing of ammonia and controlled flow of water beyond the anode, requiring improvement of MEA structures and HEMs of low ammonia permeability maintaining good anionic conductivity. AOR catalysts with improved mass activity are needed to lower costs and increase efficiency. At the system level, recycling of ammonia from the anode exhaust and reduction of trace ammonia emissions are needed to create a practical transportation power source. Finally, stable DAFC operation over at least several days would contribute substantially to building of confidence in the DAFCs as potential power source for transportation.

This study seem to be biased against clean H2 and favor Ammonia and Methanol.

The tail end cost mentioned for H2 can be mostly eliminated with on site H2 production with excess clean energy from REs. That could make H2 the cheapest avenue?

They quote a very high CO2 capture cost for Methanol.
What if you have access to a cheap source of CO2 (flue gases ?) this might tilt the costs in favour of MeOH.

mahonj
I would suggest that the article is about 0 emissions and he costs refer to end capture of these emissions NaOx and C from the vehicle.

I can't see much of the information needed for an evaluation here.

No figures at all are given for the efficiency of the ammonia fuel cell, understandable perhaps for a prototype, but its impossible to calculate the actual cost per mile without it.

The figure for methanol in GGE is to burn it in an ICE, which is way less efficient than using it in a fuel cell for hydrogen.

I can't find a definitive figure, but the energy density of PEM fuel cells seems to be around 200mW/CM2, which is a lot more than the 135mW for the ammonia fuel cell given here.

I've been using online paper writer service for my essays since the first year of my student life, and I've never been disappointed. Prices are great, and the quality is the best. Keep up the good work!