Researchers at MIT, with a colleague from Tsinghua University, have developed a safety envelope for Li-ion batteries in electric vehicles by using a high accuracy finite element model of a pouch cell to produce more than 2,500 simulations and subsequently analyzing the data with Machine Learning (ML) algorithms.

The safety envelope refers to the the range of mechanical loading conditions ensuring safe operation of battery cells. The researchers visualized the safety envelope with two types of phase diagrams, a classifier that fast predicts of short circuit or safe to a given loading condition and a regressor that quantitatively tells the amount of deformation needed to develop a short. Their study is published in the journal Joule.

In the accident scenarios of electric vehicles, the battery pack can be damaged catastrophically, resulting in the electric short circuit, thermal runaway, and possible fire and explosion. Therefore, it is important to investigate the range of conditions under which the safe operation of each individual cell is adequately controlled, known as the safety envelope.

The biggest challenge of developing such a safety envelope lies in the acquisition of a large data bank of battery failure tests. In this study, we overcome the challenge by establishing a high-accuracy detailed computational model of lithium-ion pouch cells, in which all the component materials are characterized by well-calibrated constitutive models. A large matrix of extreme mechanical loading conditions is simulated, and a data-driven safety envelope is obtained using the Machine Learning algorithm. This work is a demonstration of combining numerical data generation with data-driven modeling to predict the safety of energy storage systems. 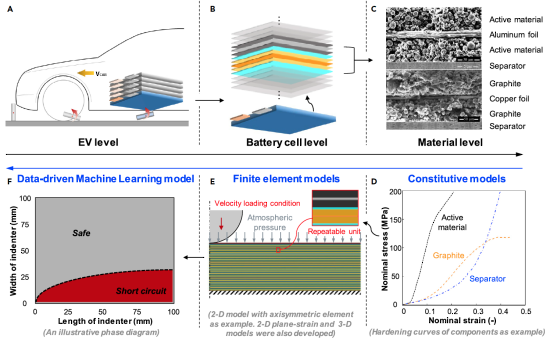 Multiple Scales of the Mechanical Safety Study and the Models at Each Scale. (A–C) The understanding of the problem is a top-down process: (A) EV – (B) battery cell – (C) components and materials, but the modeling adopts a bottom-up approach. (D–F) Constitutive models are developed at material level (D) and subsequently used as inputs for FE model (E), and the FE models generate big data for the development of data-driven ML models (F).

The study was limited to one type of battery cell (large-format secondary pouch cell with NMC cathode and graphite anode) and is therefore not universal. Further, the researchers noted, because the data used for the safety envelope comes from numerical simulations, it always carries errors as compared to the real world. This is a needed compromise due to the large cost of an experimental program, they suggested.

The study also did not include dynamic testing as validation; this would be an important next step for the future. In addition, the the state of charge of the cell and the wetting of electrolyte—both of which could substantially influence the mechanical property of some components—were not taken into consideration.

For example, some types of separators may become softer in the electrolyte due to the interaction between the polymer chain of the separator and the molecules of the electrolyte. Additionally, variables from the material and structure of the battery cell, such as the number of layers, thickness, and strength of each component and the existence of liquid electrolyte were not taken into consideration.

… the current study serves as a demonstration of the application of the ML tool in the development of safety models of EV lithium-ion battery cells, and the improvement of this study can be expected.