Ports of Auckland (New Zealand) has signed a contract with Dutch company Damen Shipyards to buy the world’s first full-size, fully electric port tug. The new tug, a Damen RSD-E Tug 2513 to be delivered in 2021, will have a 70-tonne bollard pull, the same as the port’s strongest diesel tug Hauraki, also built by Damen. 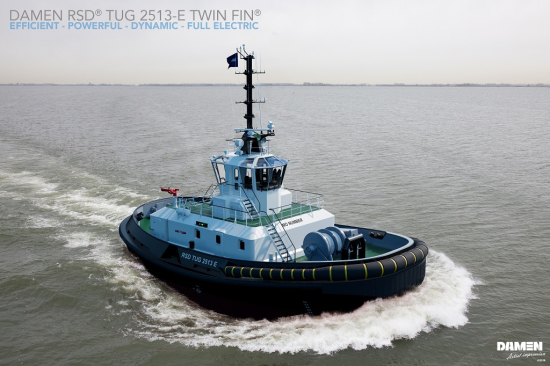 It was important to us that a new electric tug should be able to carry out normal port operations, just like our existing diesel tugs. Our new e-tug will be able to do three to four shipping moves on a full charge, or around three to four hours work (one shipping move takes an hour on average). A fast charge will take about two hours. This is just what we need.

One of the other hurdles we had to get over was cost. The purchase price of this tug is significant, at roughly double that of a diesel tug, and that is an important consideration for a business that needs to make a profit. However, we are prepared to wear that up-front cost because our commitment to reduce emissions has to be more than just words.

Fortunately, the cost of operating an electric tug is less than a third of the cost of running a diesel tug. So while we pay more up front, over the life of the tug we’ll save around $12 million in operating costs, making our electric tug cheaper in the long term.

Ports of Auckland first started looking for a battery-powered tug in 2016. This will be the first full-sized electric tug, and it is designed for normal port operations. There is an electric tug under construction for use in Turkey, but it is small (18.7m), is designed with a conventional twin screw propulsion line (as opposed to the Azimuth propulsion in the RSD-E 2513) and will work in a very narrow and tight environment.

The new tug is an electric version of the existing Damen RSD Tug 2513, which was unveiled in 2018 featuring green credentials, being fuel-efficient and IMO Tier III ready. This made an ideal candidate for conversion to the first full-size, fully electric port tug.

There are also high levels of redundancy built into its power systems. The batteries arranged in strings; if one battery in a string fails, the others carry on the work.

To ensure absolute safety, the tug also has two 1000 kW back-up generator sets. They provide enough power for the tug to operate at 40 tonnes bollard pull in the event of an electrical system failure or if the vessel needs to operate for a longer duration.

The back-up generators are intended to be used very rarely. The new e-tug can do up to four shipping moves on a charge of batteries and can go in for quick charge if required.

The energy capacity of the e-tug’s batteries is 2800 kWh—the same as 70 Nissan LEAFs (based on a 40kW LEAF battery). Based on the Hauraki 2019 diesel consumption / number of ship pulls it is expected the electric tug will use approximately 501,685 kWh to operate in the same way, this equates to 49.02 tCO2e which would mean an annual saving of 465.31 tCO2e.

In future, Ports of Auckland hope to be able to use 100% renewable energy, which would reduce emissions to zero. The tugs account for approximately 10% of the total scope 1 emissions and approximately 8% of total gross scope 1,2 & 3 emissions; replacing all tugs represents a significant reduction in carbon footprint.

Propeller diameter: It will have two azimuth thrusters with 3-metre diameter propellers

Ports of Auckland is a founding member of the Climate Leaders Coalition, a group formed to promote business leadership and collective action on the issue of climate change.

Makes a lot of sense to use the high torque electric motor for this type service, i.e., high torque for short time periods with the ability to quick charge in between jobs.
I like the design with a sea bumper around the whole tug.