A team of researchers in China suggest that, in the context of promoting the use of clean fuel vehicles and increasing vehicle fuel efficiency, CO2 emissions of China’s urban passenger transport sector could reach a peak of 225 MtCO2 in 2030.

If the mode share of public transport could further increase, the CO2 emissions from the urban passenger transport sector in China are possible to peak at around 2020 with the emissions ranging from 171 to 214 MtCO2. A paper on their study appears in the journal Energy Policy.

… This study implements three main research contents. (1) We forecast the passenger travel demand by city scale and by travel mode. Considering that residents from different size cities always perform different travel patterns such as travel frequency, travel mode, and travel distance, hence, the Chinese cities are first classified according to the population size, and then the passenger traffic volume of each travel mode is predicted by city. (2) We build a technical database containing parameters related to different travel tools, such as initial cost, operation and maintenance cost, life cycle, fuel price, energy efficiency level, annual mileage, and passenger load rate for vehicles that distinguish between fuel types and energy efficiency levels for each travel mode and vehicle. At the same time, a policy database is established with the quantitative parameters of policies or plans that have been promulgated by the Chinese government (e.g., the promotion of clean energy, limits for vehicle fuel efficiency, technology replacement, and the promotion of public transportation). (3) Under the premise of satisfying passenger travel demand, we develop a bottom-up technology selection model NET-Transport to analyze the effects of different policies and measures on energy conservation and emission reduction, and explore when peaking for CO2 emissions from the urban passenger transport sector could occur.

Some of their conclusions: 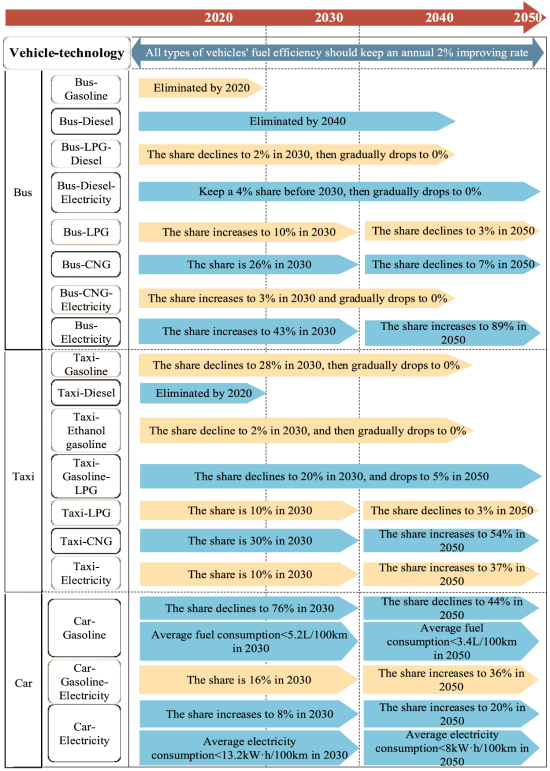 Technical roadmap of bus,taxi, and car for peaking the CO2 emissions at 2030 or before. Li and Yu.

The researchers also offered a number of suggestions: