EPA is granting 31 small refinery RFS exemptions for the 2018 compliance year, as well as 6 denials. The estimated volume of gasoline and diesel exempted is 13,420 million gallons; the estimated renewable volume obligations (RVO) exempted is 1,430 million RINs. 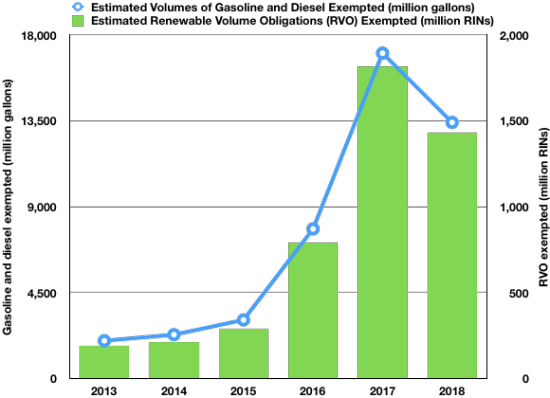 The Clean Air Act (CAA) exempted small refineries from the Renewable Fuel Standard (RFS) program through compliance year 2010; the CAA also authorized EPA to extend the exemption for two years. For 2011 and 2012, 24 small refineries were granted an exemption under this provision.

Beginning with the 2013 compliance year, small refineries could petition EPA annually for an exemption from their RFS obligations. EPA may grant the extension if it determines that the small refinery has demonstrated disproportionate economic hardship. The exempted refinery is not subject to the requirements of an obligated party for fuel produced during the compliance year for which the exemption has been granted.

The granting of the small refinery exemptions has been a major issue of contention between the Administration and the biofuels industry. In 2017, the RVO exemptions jumped to 1,820 million RINs from 790 million the year before.

The biofuels industry reacted negatively to the announcement:

The EPA has proven beyond any doubt that it doesn’t care about following the law, American jobs, or even the president’s promises. Now farmers and biofuel producers are paying the price. These exemptions are destroying demand for homegrown energy at a time when family farms are struggling, farm income is plummeting and many ethanol plants have been forced to close their doors or idle production. The impact on rural communities cannot be overstated. President Trump must move quickly if there is any hope of repairing the damage. If he won’t hold the EPA accountable, then he’s failing to uphold the commitment he’s made to rural America.

At a time when ethanol plants in the Heartland are being mothballed and jobs are being lost, it is unfathomable and utterly reprehensible that the Trump Administration would dole out more unwarranted waivers to prosperous petroleum refiners. Today’s announcement comes as a total shock, as just two months ago President Trump himself heard directly from Iowa farmers and ethanol plant workers about the disastrous economic impacts of these small refinery handouts. In response, he told us he would ‘look into it’ and we believed that would lead to the White House and EPA finally putting an end to these devastating waivers. Instead, the Trump administration chose to double down on the exemptions, greatly exacerbating the economic pain being felt in rural America and further stressing an industry already on life support.

It’s amazing that the White House could take a long, hard look at the damage this EPA is doing to rural America and decide to double down. The Bureau of Economic Analysis reports that farm income is down 49 percent since the end of 2018. Biofuel plants across the farm belt are closing their doors. There is simply no legal or economic justification for more handouts to oil giants like Exxon and Chevron -- especially when those exemptions come at the expense of families facing the worst rural downturn in modern memory.

Waivers reduce demand for ethanol, lower the value of our crop and undermine the President’s support for America’s farmers. Waivers benefit big oil at the expense of corn farmers who, between losing export markets abroad and ethanol markets at home, are losing patience. Mr. President, you proudly stand with farmers, but your EPA isn’t following through. You can step up for farmers today by reining in RFS waivers. Farmers expect the RFS to be kept whole by accounting for waived gallons and bringing more transparency to EPA’s secret process.

Granting of the additional 31 refinery exemptions are ridiculous and a slap in the face to farmers. The RFS could be one of the most effective energy policies in our country’s history, but the waivers gut the policy and destroy corn demand for farmers that are faced not only with challenges from mother nature but market destruction. It is time for President Trump to step in and uphold his promise to farmers and to the RFS.

The ICGA said that the exemptions over the past years to small refineries have effectively destroyed more than 2.61 billion gallons of ethanol demand resulting in the destruction of nearly 1 billion bushels of corn demand.

In a year in which agricultural interests have suffered under the strain of President Trump’s trade war, this action is especially callous. Due to the large volume of fuel represented by these waivers, the biogas industry will undoubtedly stop development and investment in many new projects that should be creating new jobs and infrastructure in rural, suburban and urban America. This is not how the RFS was designed to work.

It seems that President Trump’s campaign promises to support the RFS were empty at best, as his EPA is doing everything within their power to undermine markets and disregard court orders. This abuse must stop immediately. EPA must follow the letter and spirit of the law that Congress passed.

Biogas qualifies as a cellulosic fuel and can be utilized to make compressed and liquefied renewable natural gas and comprises more than 90% of the cellulosic category of the RFS.