Resolution Copper project advances in US permitting; one of largest and deepest copper mines in US

Rio Tinto’s Resolution Copper project in Arizona has achieved a major permitting milestone with the release of an independently prepared Draft Environmental Impact Statement (DEIS) for the project. The review was conducted by the US States Forest Service (USFS) over a six-year period.

Resolution, one of the most significant undeveloped copper deposits in the world, started the US permitting process in 2013; the USFS conducted an independent review under the National Environmental Policy Act (NEPA). The publication of the DEIS triggers a further public consultation process over a 90-day period, which will inform the final Environmental Impact Statement (EIS), and the next steps in the permitting process for the project. 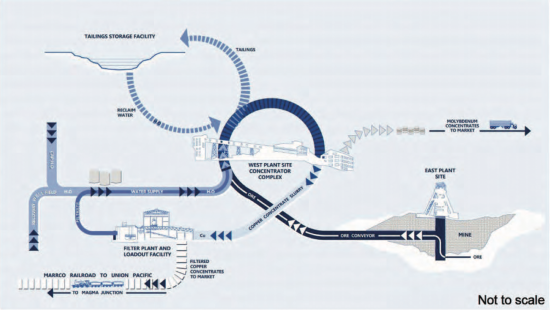 Overview of the mining process at full operation.

Achieving this significant milestone in the rigorous US permitting process allows us to continue progressing one of the world’s most significant untapped copper deposits towards development. Resolution has the potential to supply up to 25% of the United States’ copper demand and complements Rio Tinto’s other copper projects.

Long-term copper fundamentals remain strong—with supply challenged and demand driven by the adoption of electric vehicles, the electrification of industry and a growing share of renewables in the energy mix. Rio Tinto will be well positioned to benefit from this demand outlook and to provide North American manufacturers with the materials that are essential to their products.

As high-grade copper deposits become rarer, miners must venture ever-deeper, in inhospitable conditions, to access the metal. The Resolution Copper deposit lies more than a mile beneath the surface.

The project would progress through three distinct phases: construction (10 years), production (40–50 years), and reclamation (5–10 years). At the end of operations, facilities would be closed and reclaimed in compliance with permit conditions.

Operational projections are removal of 1.4 billion tons of ore and production of 40 billion pounds of copper using a mining technique known as panel caving. Using this process, a network of shafts and tunnels is constructed below the ore body. Access to the infrastructure associated with the panel caving would be from vertical shafts in an area known as the East Plant Site, which would be developed adjacent to the Oak Flat Federal Parcel. This area would include mine shafts and a variety of surface facilities to support mining operations.

This area currently contains two operating mine shafts, a mine administration building, and other mining infrastructure. Ore processing would take place at the old Magma Mine site in Superior.

The estimated total quantity of external water needed for the life of the mine (construction through closure and reclamation) is substantial and varies by alternative (180,000 to 590,000 acre-feet).

Resolution Copper proposes to use water either directly from the Central Arizona Project (CAP) canal and/or groundwater pumped from the East Salt River valley. Over the past decade, Resolution Copper has obtained banked water credits for recharging aquifers in central Arizona; the groundwater pumped would be recovery of those banked water credits, or groundwater use authorized by the State of Arizona under a mineral extraction withdrawal permit.

While all mining would be conducted underground, removing the ore would cause the ground surface to collapse, creating a subsidence area at the Oak Flat Federal Parcel. The crater would start to appear in year 6 of active mining. The crater ultimately would be between 800 and 1,115 feet deep and roughly 1.8 miles across. The Forest Service assessed alternative mining techniques in an effort to prevent subsidence, but alternative methods were considered unreasonable.

The project partners will have spent more than $2 billion (Rio Tinto share $1.1 billion) by 2020 to develop and permit the Resolution copper project, including $302 million of additional expenditure approved earlier this year.

Work being undertaken includes reclamation of the historic Magma Copper Mine site, sinking a second shaft to mining depth, rehabilitating an existing shaft, extensive drilling and ore body testing, and the permitting and public engagement process.

Resolution Copper Mining is a limited liability company owned 55% by Rio Tinto and 45% by BHP. Funding is proportional among the project partners.

In the DEIS, the USFS notes that the project is controversial for several reasons:

Foremost among them are the expected significant environmental impacts and loss of the Oak Flat area, historically used by Native Americans who hold the land as sacred and use the area for spiritual and traditional uses. Additionally, in March 2016, the Oak Flat area was listed on the National Register of Historic Places (NRHP) as a traditional cultural property (TCP).

There is the potential for some portion of existing yet currently unidentified prehistoric and historic artifacts and resources to be disturbed or destroyed, especially within the Oak Flat subsidence area and the footprint of the tailings storage area. These losses could potentially include human burials within these areas.

Water use is a major concern among the public, other government agencies, and stakeholders. Recycling and reuse would happen extensively throughout the mine operations, but as previously mentioned, additional external water is needed for processing.

There are concerns regarding how public safety may be affected by the project. This includes the physical safety of persons in areas of subsidence and adjacent communities, as well as increased traffic and effects on air and water quality.

There is public apprehension over the creation, and type, of a tailings embankment for the tailings storage facility. The catastrophic collapse of the Brumadinho tailings dam in Brazil in January 2019, resulting in over 100 fatalities, has heightened concerns.

The Tonto National Forest (part of the US Forest Service) is the lead federal agency for the federal review of the Resolution mine plan and land exchange and is responsible for preparation of the environmental impact statement (EIS) under the NEPA. Under US law, a final EIS and Record of Decision is required to advance the mine and complete a land exchange between Resolution and the US government.