These reductions have occurred while California’s economy has continued to grow. Compared to 2016, California’s GDP grew 3.6% while the carbon intensity of its economy declined by 4.5%. 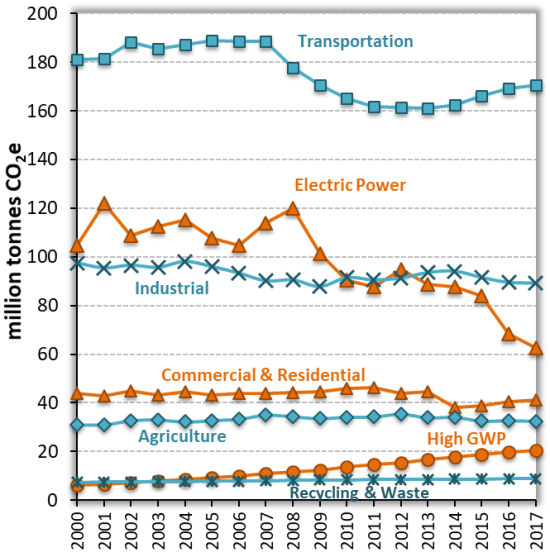 Trends in California GHG Emissions. Changes in emissions by Scoping Plan sector between 2000 and 2017. Emissions are organized by the categories in the AB 32 Scoping Plan. Source: ARB.

The transportation sector remains the largest source of GHG emissions in the state, and saw a 1% increase in emissions in 2017. This is, however, the lowest growth rate over the past 4 years. Transportation sector emission sources include combustion of fuels utilized in-state that are used by on-road and off-road vehicles, aviation, rail, and water-borne vehicles, as well as a few other smaller sources. 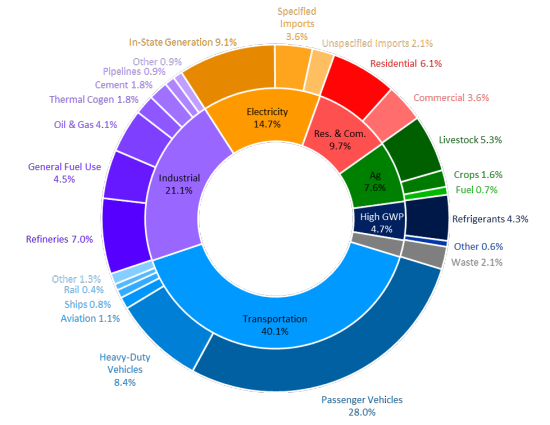 2017 GHG Emissions by Scoping Plan Sector and Sub-Sector Category. The inner ring shows the broad Scoping Plan sectors. The outer ring breaks out the broad sectors into sub-sectors or emission categories under each sector.

Emissions from transportation sources were relatively constant from 2002 through 2007, declined through 2013, then increased by 9.0 MMTCO2e (6%) from 2013 to 2017. Emissions from gasoline used in on-road vehicles are the main driver of that increase. 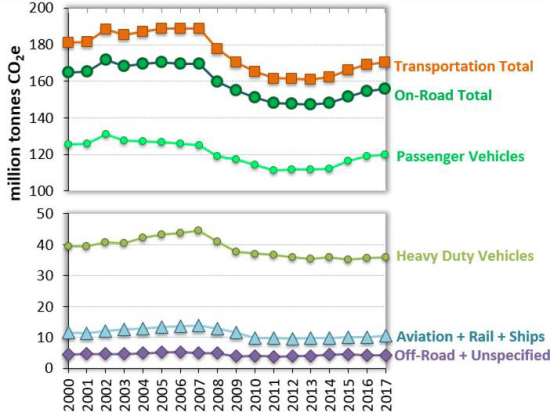 Biofuels such as ethanol, biodiesel, and renewable diesel can displace fossil fuels and reduce the amount of fossil-based CO2 emissions released into the atmosphere. The percent of biodiesel and renewable diesel in the total diesel blend have shown a significant growth in recent years, going from 1% in 2012 to 18% in 2017.

Other notable highlights in the inventory include: