Electro-Active Technologies has exclusively licensed two biorefinery technologies invented and patented by the startup’s co-founders while working at the Department of Energy’s Oak Ridge National Laboratory. The technologies work as a system that converts organic waste into renewable hydrogen gas for use as a biofuel.

There are usually thousands of microbes that are required to convert a complex organic mixture from biomass into electrons. We developed an enrichment process to create this [microbial] consortium to efficiently extract electrons from organic materials.

An electrolysis method designed by co-founders Abhijeet Borole and Alex Lewis then combines the protons and electrons into hydrogen molecules. Although they originally developed both processes to address the problems of liquid waste formed during biofuel production, Electro-Active Technologies will focus on fighting food waste. 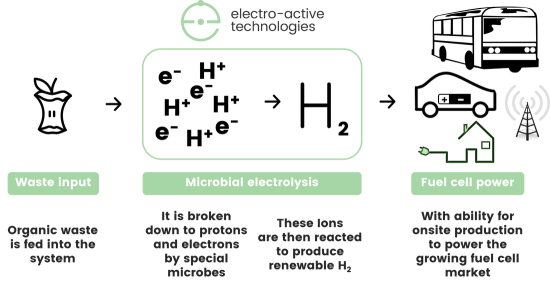 We waste about 40% of food that is produced in the world today, which generates methane in landfills. This is also considerable in context of how much energy and effort is put into the food industry. We can deliver a zero-emission fuel that reduces transportation emissions, while also using food waste to make the hydrogen

The duo selected food waste as a microbial feedstock after interviewing 80 customers across waste-to-hydrogen industries while participating in DOE’s Energy I-Corps, a program that helps accelerate commercialization efforts at DOE laboratories. Because customers often must pay to dispose of food waste, the food waste-based feedstock presents economic advantages over using biomass, which must be purchased. The company is creating prototypes for modular waste conversion systems that customers can place onsite.

Founded in 2017, Electro-Active Technologies is working to move industries and communities towards closed-loop operations that save money and improve sustainability. The startup was selected to participate in San Francisco’s IndieBio Accelerator program in February and was recently accepted into the H2 Refuel Accelerator, which is sponsored by Shell, Toyota and the New York State Energy Research and Development Authority.

Abhijeet Borole spent more than 20 years at ORNL, where he led research on microbial fuel cells and electrolysis cells for the development of bioelectrochemical systems for waste conversion. He is now a research professor at the University of Tennessee, while also working with the startup.

Alex Lewis researched under the mentorship of Borole as a doctoral candidate in Energy Science and Engineering through the University of Tennessee’s Bredesen Center for Interdisciplinary Research and Graduate Education. As the CEO of Electro-Active Technologies, he was recently selected as a fellow in ORNL’s third Innovation Crossroads cohort with support from the Tennessee Valley Authority.

The initial research that enabled this technology development was supported by DOE’s Office of Energy Efficiency and Renewable Energy, Bioenergy Technologies Office. The technology was jointly patented by ORNL and the University of Tennessee Research Foundation, a non-profit affiliate of the UT system that promotes the commercialization of UT intellectual property.

This is a fascinating process, something I have not yet come across. I would love to understand if anyone else is producing useable Hydrogen via this method at scale.. Have you heard of any case? or has the technology only been proven in the lab?