A study by a team of researchers from China, the US and Germany suggests that future climate change may worsen air quality for more than 85% of China’s population, leading to an additional 20,000 deaths each year. An open access paper on their work is published in Proceedings of the National Academy of Sciences (PNAS).

(The RCP 4.5 scenario is a stabilization scenario—the radiative forcing level stabilizes at 4.5 W/m2 before 2100 without overshoot by employment of a range of technologies and strategies for reducing greenhouse gas emissions.)

We find that, assuming pollution emissions and population are held constant at current levels, climate change would adversely affect future air quality for >85% of China’s population (∼55% of land area) by the middle of the century, and would increase by 3% and 4% the population-weighted average concentrations of fine particulate matter (PM2.5) and ozone, respectively.

The important underlying climate mechanisms are changes in extreme conditions such as atmospheric stagnation and heat waves (contributing 39% and 6%, respectively, to the increase in mortality). Additionally, greater vulnerability of China’s aging population will further increase the estimated deaths from PM2.5 and ozone in 2050 by factors of 1 and 3, respectively.

Our results indicate that climate change and more intense extremes are likely to increase the risk of severe pollution events in China. Managing air quality in China in a changing climate will thus become more challenging. 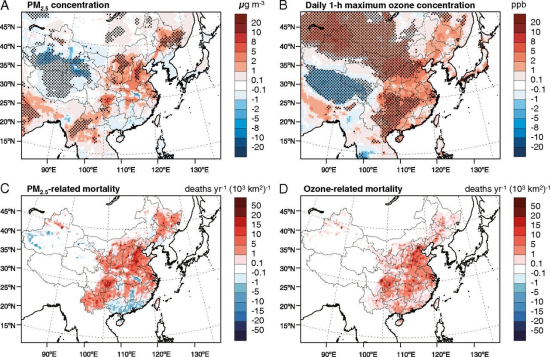 Projected multiyear mean changes in air quality due to climate change and the associated health impacts in China. Projected changes in mean annual PM2.5 concentrations (A) and the ozone season average of daily 1-h maximum ozone (B) over East Asia related to climate change under RCP4.5 are shown from current (2006 to 2010) to future (2046 to 2050) years. The estimated changes in annual mortality in China due to the climate-related changes in PM2.5 (C) and ozone (D) exposure are shown. The dots in A and B denote areas where changes are statistically significant at the 90% level. Hong et al.

Air pollution is already the cause of more than 1 million premature deaths per year in China, according to the World Health Organization.

For Chinese policy makers working to improve current air quality and protect public health, our finding is a daunting conclusion, and one that underscores the need to tackle the challenges of both climate change mitigation and air quality at the same time.