Researchers at Empa have developed an electrohydraulically actuated cam-less valve train that enables completely free adjustment of stroke and timing, while at the same time being robust and cost-effective. The new technology saves up to 20% fuel in typical passenger car low load operating conditions.

The FlexWork valve train was mounted on a serial production engine and has been running successfully in test bench operation for several months. 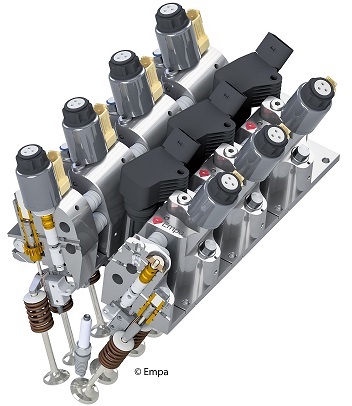 The valve train is the “respiratory organ” of combustion engines: it manages the aspiration of fresh air and the discharge of exhaust gases (gas exchange). Today, only mechanically driven camshafts are used in series production for this purpose, often equipped with an additional mechanism, some of which are quite complex. This allows the modification of a valve movement pattern given by the camshaft, which is not possible without an increase in friction. At the same time, flexibility is somewhat limited. What is needed—among other things for adaptation to changing fuel properties—are fast valve movements even at low speeds, stroke adaptations and cylinder-selective widely variable valve timing.

The valves are actuated hydraulically and controlled electrically via a solenoid coil. As soon as a control current flows, a specially designed hydraulic valve opens, allowing hydraulic fluid to open the gas exchange valve to the desired extent in milliseconds counter to a spring. When the current is switched off, the gas exchange valve is closed again by the spring force and feeds a large part of the hydraulic energy required for opening back into the hydraulic system.

The basic principle of the valve train—for both intake and exhaust side—is an asymmetric hydraulic pendulum, which can be described as a mass-spring-system. Hence, the duration for the opening of the gas exchange valves TOpen, that is time from zero lift to final lift, depends on the stiffness k of the gas exchange valve springs and the mass MSystem of all moving components.

… The peculiarity of the FlexWork system is that at high engine speeds the valve lift profiles are similar to cam-driven profiles; at low engine speeds, however, opening and closing gradients are very steep.

The system achieves a significantly lower energy requirement over a wide operating range compared to camshaft-driven systems. Together with an optimized gas exchange, the fuel consumption of the test spark-ignition engine is about 20% lower than with conventional valve control using a throttle in combination with camshafts in the low-load range typical for passenger cars.

By selecting the operating parameters, the opening and closing times as well as the valve lift for each cylinder can be chosen completely unrestricted. This means that each engine operating condition can be varied from cycle to cycle, for example by intelligent load control, by selecting the residual gas quantity remaining in the cylinder (exhaust gas recirculation), or by deactivating unneeded cylinders without the driver noticing.

This makes the engine highly adaptable to new renewable fuels: oxygen-containing fuels such as methanol or ethanol, for example, allow more residual gas to remain in the cylinder. Natural gas, biogas and syngas generated from wind and solar power offer increased anti-knock properties, and the valve train can react flexibly to this as well.

In addition, alternative combustion concepts can also be implemented comparatively easily, for example homogeneous self-ignition: a fuel-air mixture is ignited at the right moment without ignition sparks by setting the correct conditions towards the end of compression. The mixture is combusted almost without pollution.

Another speciality of the system set up at Empa is the choice of hydraulic fluid: instead of using oil as usual, a water-glycol mixture—i.e. engine cooling water—can be used. Due to its physical properties, this medium is very suitable for fast-switching hydraulic systems, as it is very stiff and therefore creates fewer hydraulic losses. This makes the cylinder head completely oil-free, which can allow a cheaper engine oil with extended change intervals to be used for the rest of the engine.

As part of the FlexWork project funded by the SFOE, the new valve train was put into operation in a passenger car engine powered by natural gas and derived from a VW 1.4l TSI engine. The required components were manufactured by Empa’s own workshop. The control system for the test engine was developed by the Empa researchers themselves. The valve train has been running on an Empa engine test bench since October 2018 and has already survived many millions of cycles in fired engine operation flawlessly.

The FlexWork valve control needs only low-cost components. No expensive, very fast switching valves and no complex sensors are required. Empa is in discussions with engine manufacturers for the transfer of this technology, which is suitable not only for combustion engines but also for compressors.

I recommend those who are interested to read the article in MTZ Worldwide. There are also some other articles on the same topic.

Absolutely no interest in a revival of the stone age.

The Stone Age did not end due to a lack of stones.

Sounds good to me.
Hybridise it or use it in a serial hybrid or as a range extender and you really have something.
Alternately, just use it "as is" for now to get started with it.

@SJC - a surfeit of copper, then tin combined to make bronze.

The oil age will end for a lack of atmosphere in which to dilute the CO2 from the oil, not the oil itself.

Coal, oil and NG age will end whenever living creatures wake up and find other ways to produce cleaner energies?

@harvey: Cleaner energy when you require it, at a comparable price.

Looks as if the MEs are pulling out all the stops during this 'Last Hurray' of fossil fuels.

The upshot to the saying is it ends when we find a better way.
Show us the way that most will accept and adopt, it is not EVs.

@ Lad:
Apparently, they're really getting desperate; aren't they.

It's a revival of Bosch EHVS, from the early-mid 2000 :) not quite Stone Age, but not far... funny to see a claim of innovation behind these concept... we should spend our R&D $$ and brain power on more sustainable solution, and low cost...

Clean H2 at 10 to 50 cents/Kg and more REs could trigger the end of the Coal/Oil age?

An HEV running on biomethane, bioethanol, biodiesel, or renewable H2 is also a sustainable solution.

PHEVs with bio synthetic fuels would do nicely, however getting people to adopt those is another thing entirely. Witness 20 years since the Prius, what percentage of cars in the world are hybrids?

>>>>>>"PHEVs with bio synthetic fuels would do nicely, however getting people to adopt those is another thing entirely."
Answer: Good point! If the US gov is not being influenced by big oil, then, in the goal of energy security, additional federal sales tax and tax credit can be levied on new vehicles based on MPG and MPGe rating. For example, $100 for every MPG below 50 mpg. So, a vehicle with 25 MPG rating would be assessed an additional $2,500 in tax at the point of sale, while a vehicle with 75 MPG would receive a $2,500 tax credit. This would immediately make a hybrid cost competitive with a non-hybrid, PHEV's and BEV's would be cheaper to buy, and would make big SUV's and pick-up trucks less popular.
Quite simple...

Anybody who read the MTZ article? Or do you prefer to post crap?

If nobody cared to read the MTZ article, any attempt to a meaningful discussion on this topic would be pointless.

A bit filled with yourself?

Anyone endowed with just a little bit of common sense - who has driven at least a thousand miles with a BEV - will never again be tempted to flirt with an ICE or anything related to it.

No longer have access to MTZ :( Check MTZ Issue Dec 2004 from Denger. I would be curious to see what different claims they make in term of fuel economy. All I can say 20% at low load is true, reducing pumping loop, but you have system doing the same, (valvetronic, multi-air, and some other system from Nissan and Honda). The reality in NEDC (WLTP don't know) would not be so glamorous. One fundamental challenge you are facing with those system on the exhaust valvetrain, is that you require way more force to open the valves, driving the efficiency of the overall system low. On top of it, with inherent cycle to cycle combustion variation, it is hard to control the valve trajectory on the exhaust, if you are operating those system as open loop. Bottom line, we haven't seen yet a use case which justify the add-on cost of such system.

Thanks, Peter, for pointing out the MTZ paper, but I don't have to read it, since I'm quite familiar with the working of electro-hydraulic valve actuation system. Koenigsegg Freevalve camless system is an example of such arrangement. But, if you feel that the new system by Empa is a major advancement from existing systems, please kindly let us know some detail. Thank you in advance.