The complete Blue World system includes the fuel cell stack, the methanol reformer, heat-exchanger, power conversion units and a set of power and operation controllers, and balance of plant. The MEA is one of the core components in a fuel cell stack.

The core system components are a High-Temperature PEM fuel cell stack and a methanol reformer. A closed thermal integration enables reuse of fuel cell waste heat for fuel evaporation thereby increasing efficiency. The Balance of Plant components are needed to control and supply the system with air, fuel, and coolant.

The HT PEM-technology operates at 160-180 °C and has a high resistance to impurities in reformat gas which makes it suitable to combine with fuel reformers. The combination can be done without the implementation of expensive and cumbersome clean-up technologies which enables a simple and cost-effective system design.

The Dapozol MEA is optimized for operating temperatures of 120-200°C, high carbon monoxide concentrations and no requirements for humidification.

Methanol reforming converts a mix of methanol and water into a hydrogen-rich gas. Before the reforming can take place the fuel needs to go from liquid to gas form by evaporation, a process that requires energy and in a generic system would mean using primary fuel, leading to lower efficiency. In the combination with HT PEM the waste heat is of sufficient temperature to drive this process, meaning an energy-free process which leads to a superior overall efficiency.

The fundamental chemical process, which takes place in the reformer is:

The hydrogen produced is subsequently used in the fuel cell to produce electricity.

Blue World Technologies’ methanol fuel cell system is applicable to a variety of industries with a primary focus on the transportation sector. A liquid fuel, methanol can easily be stored and transported around the world using the already existing infrastructure with only minor adjustments and low investment costs to follow. The methanol fuel cell system has zero in-use emissions of criteria pollutants, thereby providing a solution to the problems with air pollution that cities around the world are currently facing.

For vehicles, the methanol fuel cell systems would be applied in a plug-in battery hybrid configuration to balance the need for power/acceleration and energy/range. Waste heat can be utilized for cabin/battery heating and fuel tank can be placed where chassis design allows it. 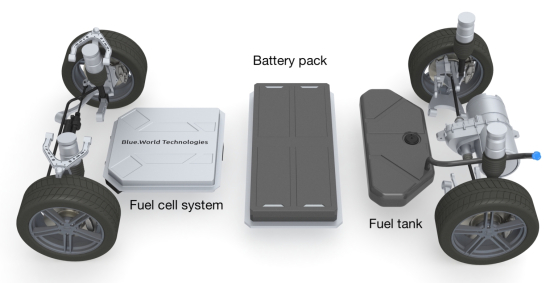 This would enable a ~3-minute refueling time with a +1000 km range using a cheap, simple fuel with reuse of existing infrastructure and logistics.

Later this year, Blue World Technologies is starting the construction of a methanol fuel cell factory with a yearly production capacity of 50,000 units. The close collaboration with Danish Power Systems will bring extensive technical know-how and manufacturing experience to the partnership.

There is a Danish company called Serenergy that hat HTPEM as well.
https://serenergy.com/about-us/

Methanol is made from synthesis gas (a mixture of CO and H2) which is in turn made from fossil hydrocarbons. Natural gas and coal can be used for this purpose. Widening the range of hydrocarbons that can be used in the transportation industry seem like a negative development from the point of view of GHG emissions.

It is true of course that chemists George A. Olah, Alain Goeppert, and G. K. Surya Prakash in their book The Methanol Economy suggest that in the future methanol could be economically be produced from atmopheric CO2 and H2 produced via electrolysis (high temperature electrolysis using waste heat from advanced nuclear reactors is their preferred production method). However, I am not holding my breath waiting for this future to arrive.

For vehicles, the methanol fuel cell systems would be applied in a plug-in battery hybrid configuration to balance the need for power/acceleration and energy/range. Waste heat can be utilized for cabin/battery heating and fuel tank can be placed where chassis design allows it.

Typical specifications would include a 15 – 25 kWh battery pack; a 10 – 20 kW methanol fuel cell system; and a 50 – 80 L liquid tank.Even if the MeOH was made from natural gas, you can expect 2/3 or more of the energy to be delivered as electric power from the grid rather than liquid fuel.  That is a massive savings in (direct) CO2 emissions.

If the carbon in the methanol is sourced from biomass, the fuel supply would be carbon neutral.  My calculations indicate that there is enough biomass in the USA to do this.

"Even if the MeOH was made from natural gas, you can expect 2/3 or more of the energy to be delivered as electric power from the grid rather than liquid fuel.

It doesn't have to be, Roger.  Only autothermal reforming has to create net CO2.  If you have a carbon-free source of heat at 1000°C or more, you can use it to reform CH4, CO2 and steam to syngas with a net consumption of CO2 and a net increase in chemical energy.

However, If global warming is the issue, Hydrogen should be used directly instead of using Methanol. This is because Hydrogen is carbon-free and does not emit CO2, unlike the use of Methanol or any other carbon-containing fuels. Even if Hydrogen is produced from fossil fuel or waste biomass, the CO2 resultant from the steam reformation process can be directly and immediately sequestered into depleted oil and gas wells, thus no CO2 emission. The use of waste biomass to produce Hydrogen with CO2 sequestration will result in CO2 negative process equivalent to direct removal of CO2 from the atmosphere.

Due to the advancement of manganese hydride matrix that can store H2 at 1,800 psi with much higher density than previously, H2 will find practical application in the transportation sector. For stationary applications and for H2-filling stations for vehicles, H2 can be substituted for natural gas and can be transported to the end-users with relative ease similar to the availability of natural gas.
So, future emphasis on energy use should focus on the Hydrogen Economy as the principal approach to halt CO2 emission to combat Global Warming.

A storage pressure of "only" point-nine tons per square inch doesn't seem like much of an improvement over 700 bar, and it still leaves you with the CFC-like problems of hydrogen:  it loves to leak through everything and its major mode of destruction is by UV or reaction with atomic oxygen in the stratosphere, forming water where no water should be.  Stratospheric clouds are very cold and trap more outgoing heat than they block coming in, adding to climate change.

Methanol is a liquid at room temperature and breaks down quickly in the environment.  It's toxic, but not the broad threat to the environment that hydrogen is.  Aside from not being a direct GHG, hydrogen is a threat on the order of methane.

Methanol can be made from bio CO2 and wind/solar hydrogen.
It is reformed without combustion.
HTPEM have not advanced much lately,
it may be time to accelerate that a bit.

"However, I am not holding my breath waiting for this future to arrive."

Neither am I. I am actively working on it.

The non-power-producing sources of CO2 I can think of to combine with H2 from electrolysis include:

By my calculations, the amount of carbon emitted from the calcination process - globally - is about twice as much as the amount used for jet fuel - the hardest fossil fuel to replace.

The CO2 from cement production and steel production is fossil carbon. You are making the carbon double duty, but the carbon is still flowing from fossil reservoirs into the atmosphere.