Researchers at the University of Delaware have demonstrated a direct ammonia fuel cell (DAFC) prototype with a peak power density of 135 mW cm−2. The DAFC employs an ammonia-tolerant precious-metal-free cathode catalyst and a high-temperature-stable hydroxide exchange membrane. Their paper is publishedin the journal Joule. 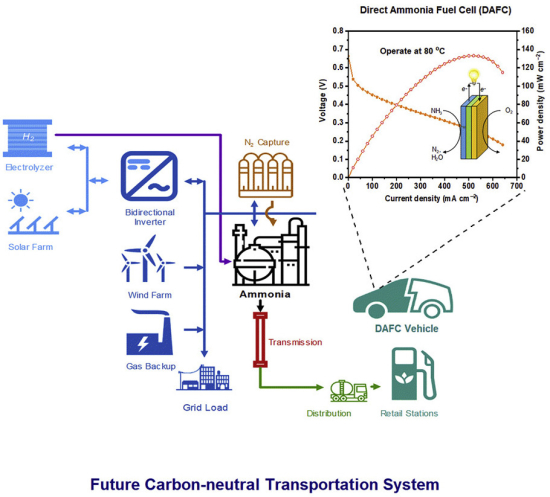 The researchers started by analyzing the economics of hydrogen-, nitrogen-, and carbon-based fuels made by carbon-neutral pathways in a post-fossil world in which only water, air, and renewable electricity are available for fuel synthesis. They found that ammonia has the lowest source-to-tank energy cost by a significant margin. 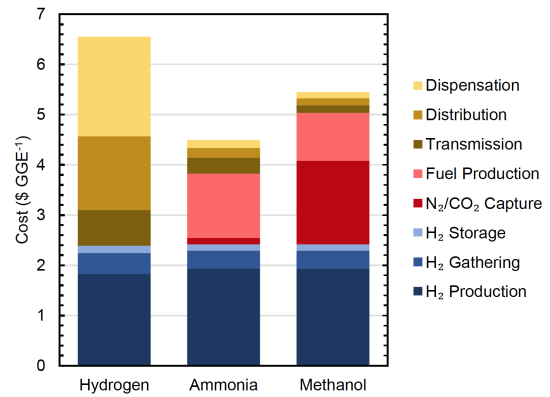 As a nitrogen-based liquid fuel, ammonia is cheaper to store and distribute than hydrogen and avoids the carbon dioxide emissions of other liquid fuels, which are expensive to capture.

—Brian Setzler, one of the lead authors and a postdoctoral associate at UD

The team solved the first problem by using hydroxide exchange membrane fuel cells that have been studied for over a decade in the lab of Yushan Yan, a Distinguished Engineering Professor at UD.

Assisted by a $2.5-million grant from the REFUEL program of the Advanced Research Projects Agency-Energy (ARPA-E) in the US Department of Energy (DOE), the UD team engineered a fuel cell membrane that can operate at higher temperatures to speed up ammonia oxidation. They also identified catalysts that were not poisoned by ammonia.

With these improvements, we have demonstrated a new direct ammonia fuel cell prototype with a peak power density of 135 milliwatts per square centimeter, which closes much of the performance gap compared to hydrogen.

Maybe, but ammonia is rather dangerous. I wouldn't like to be in an ammonia fuelled car that crashed. (Or near it).
It looks like if they could improve the CO2 capture, they could make methanol as cheaply.
Perhaps if you started with wood, rather than atmospheric CO2, it could be done more cheaply, and you'd still be taking co2 out of the air.
or am I missing something.

No, you're not missing anything.  But using wood violates the assumptions behind the study.  Different assumptions, different possibilities, likely different results.

Ammonia production is not 100%-energy-efficient, may be around 50%-70% meaning that it would cost more in Hydrogen consumption and/or energy input, and it still costs a lot to produce Ammonia from Hydrogen, factoring facility cost and labor cost, when it would be simpler to consume the Hydrogen directly.

The current issue of Ricardo Quarterly (Q2/2019) has an article on the use of Ammonia fuel for shipping (title:"Sailing on Solar"). They envision using "green ammonia" in the standard marine diesel engines.
An interesting idea, though an almost green hydrogen like that proposed by Proton Energy of Calgary would make more sense.

Great news. Ammonium has more hydrogen than liquid hydrogen itself.

The Ricardo article did not look at Kubas Manganese Hydride, and it looks like it would have even higher volumetric energy density than Ammonia (four times the volumetric density of 700 bar H2).
Note: In terms of energy density, liquid ammonia contains 15.6 MJ/L, which is 70% more than liquid hydrogen (9.1 MJ/L at cryogenic temperature) or almost three times more than compressed hydrogen (5.6 MJ/L at 70 MPa).
As Roger Pham points out H2 would be cheaper than Ammonia.

One article says making ammonia uses 2% of the world's energy.