On the eve of its 50th anniversary earlier this month, Embraer unveiled images of a demonstrator aircraft with 100% electric propulsion technology, which is currently under development in collaboration with WEG. The first flight of the prototype is scheduled for 2020. 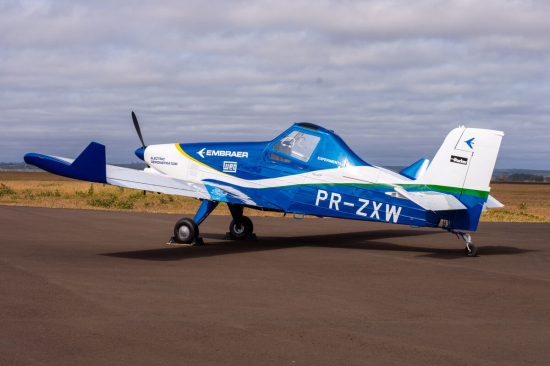 The electric prototype is based on the EMB-203 Ipanema.

The aircraft’s electric motor and controller are being manufactured by WEG at the company’s headquarters in Jaraguá do Sul, Santa Catarina, Brazil, as part of the scientific and technological cooperation agreement for joint development of electrification technologies.

Advances on the project include a partnership with Parker Aerospace that will be responsible to supply the cooling system for the demonstrator aircraft.

Over the coming months, the companies’ technical teams will continue to test the systems in the labs preparing the integration in the demonstrator aircraft for testing under real operating conditions.

The proposed scientific development program of aeronautical electrification, formalized through the cooperation between Embraer and WEG announced in May 2019, constitutes an effective and efficient instrument for experimentation and maturation of the technologies before they are applied in future products.

The partnership, in the context of pre-competitive research and development, seeks to accelerate the knowledge of the necessary technologies to increase the energy efficiency of an aircraft, considering the use and integration of electric motors into innovative propulsion systems.

A small single-engine aircraft, based on the EMB-203 Ipanema, will be used as test bed, carrying out the initial evaluation of the electrification technology.

The electrification process is part of a series of efforts carried out by Embraer and the aeronautical industry aimed at ensuring the commitment with the environmental sustainability, as already done with biofuels to reduce carbon emissions.

Founded in 1961, WEG is a global electric-electronic equipment company, operating mainly in the capital goods sector with solutions in electric machines, automation and paints for several sectors, including infrastructure, steel, pulp and paper, oil and gas, mining, among many others.

This has been done,
Siemens has an electric and Boeing has a fuel cell.

First, prop planes ...later ducted fan electric hybrids airliners as the technology advances...perhaps burning hydrogen in turbines. At any point in time there are 30,000 aircraft flying in the atmosphere, polluting the hell out of everything. And, the count is growing.

The design of this prototype will not exactly boast of efficiency. I've seen several new all electric designs that have a far higher promise of efficiency than this. Just old technology in new wrappings.

Of course the airframe isn't terribly efficient; the cockpit design says it was originally a crop-duster.  Those things are designed to be maneuverable (essentially aerobatic) while carrying a load; efficiency isn't part of the job description.

It was a convenient air frame to use, they want to be in the game.

Due to larger volume/weight of on board batteries and/or FCs + H2 tanks, future e-planes will require improved design and the use of lighter materials to increase range and load capabilities.

Using existing heavier planes may not be the best solution.