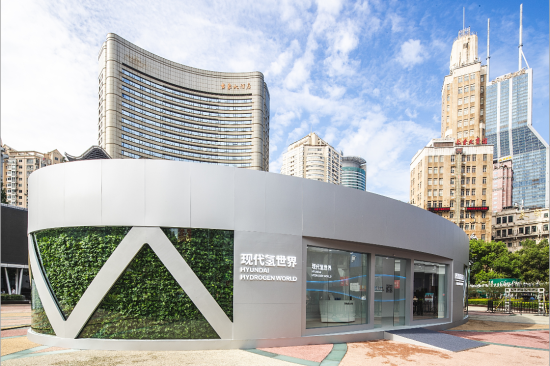 The exhibit is open to the public from 26 August through 8 September. The oval-shape arena covering 406 square meters enables visitors to see, experience and understand how the future global hydrogen society can be ushered in by the safe, ecofriendly and efficient energy.

It features a variety of displays and programs, including an air-purifying demonstration on a 2019 NEXO fuel-cell electric vehicle, a model NEXO showing its internal mechanical parts, as well as galleries and spaces containing hydrogen-related information.

Visitors can experience and learn about future mobility technologies and services, particularly how hydrogen contributes to the sustainable economic and social development of China and the world.

Through the Hyundai Hydrogen World, we aim to spread understanding of our technological competence and vision for a global hydrogen society, which we have uniquely accumulated over the years. Hyundai Motor Group will actively respond to the Chinese government’s new energy development policy, and plans to provide information related to the fuel-cell electric vehicle to a wider Chinese audience.

The opening ceremony on Aug. 26 was attended by officials from the United Nations Development Program, automotive engineering schools in China and local media. Hyundai Motor Group expects the venue to act as a magnet for rousing public interest, and thus facilitate the promotion of its hydrogen vision and related technologies. Particularly in China, which is the world’s largest electric vehicle market, Hyundai Motor Group aims to gain the first mover advantage in the growing hydrogen economy, and recover its recent slowdown in sales.

In the zone showcasing air-purification on a NEXO, visitors can see how the fuel-cell electric SUV filters 99.9% of ultra-fine dust particles while driving. The 2019 NEXO—Hyundai’s second-generation FCEV with a 609-kilometer range on a single charge (under Korean certification standards)—emits only clean water vapor and purifies the air while driving. NEXO has earned a TOP SAFETY PICK+ award from the Insurance Institute for Highway Safety (IIHS) for vehicles built after June 2019.

The zone dedicated to the future hydrogen society plays a moving image clip explaining how fuel-cell electric technology is used in diverse home and industrial settings, such as hydrogen production and refueling, autonomous driving, electricity generation and solar energy.

The zone with an open FCEV shows its internal structure, parts and mechanism, including the hydrogen tank and fuel-cell system. It also explains differences between the combustion-engine, electric and fuel-cell electric vehicles, as well as the safety of FCEVs.

To strengthen its worldwide leadership in hydrogen, Hyundai Motor Group announced the FCEV Vision 2030, which outlines how the Group plans to bring about a global hydrogen society with technologies beyond the transportation sector. Hyundai aims to establish an annual production system for 500,000 FCEVs by 2030.

Hyundai is part of Hydrogen Council, a worldwide CEO-led coalition of 60 global energy, transport and industry companies united by a long-term vision to develop the global hydrogen society.

In other news from China and their switch in emphasis to hydrogen and fuel cells, there is this from the centre of their coal production:

'Datong has put 50 hydrogen-powered buses onto its streets. The vehicles can run up to 500 km and operate well at minus 30 Celsius degrees. It is building a complete industrial chain related to hydrogen energy and locking an array of enterprises in.

Zhou Qiang, the general manager’s assistant of HydraV, said it would be the company’s largest industrial base in northern China, with an annual production capacity of at least 50,000 hydrogen fuel cell engines within three years.

HydraV is not alone in pioneering the city’s hydrogen energy industry. Beijing Shouhang IHW Resources Saving Technology Company Co., Ltd has set up a branch in Datong, with a plan to build three hydrogen production factories, 10 to 20 refueling stations, and three to five distributed hydrogen power plants here in the following five years.

However, Datong looks beyond hydrogen-powered vehicles. The city sees an annual coal output of over 100 million tonnes regardless of its exhausted quality coal resources. Producing hydrogen from coal is a key step for the city to move towards a hydrogen capital.

Datong Coal Mine Group Co., Ltd. is calling for bids for its 5,000-tonne coal-to-hydrogen project, which is expected to produce 110,000 tonnes of hydrogen each year when it completes.

“The cost of producing hydrogen from coal on a large scale is around 0.8 yuan per cubic meter, much cheaper than from natural gas and water electrolysis,” said Zhang Junlong, director with the Group’s hydrogen energy development preparation office.

According to Wu, the cooperation between Datong and several automakers is under discussion, hoping to build a complete industrial ecosystem from hydrogen production and storage to manufacturing of core hydrogen fuel cell components as well as vehicles.'
https://fuelcellsworks.com/news/china-focus-chinas-coal-capital-transforming-into-hydrogen-hub/

Hopefully this will include CO2 sequestration, as Japan is doing in exploiting Australian coal deposits for hydrogen, and Europe is doing in its 'blue hydrogen' programs.

I don't know if that is in the plans, but the costs at least seem to show room to finance it and still have economic hydrogen.

China may become the leader in clean H2 production and massive use of FCEVs by 2020/2022?

Coupled with more REs, it could become one of the main method to reverse the polluting cycle/process?

The hypedrogen people have talked endlessly about how Green their world will be, and along comes China which is going to power the whole thing with...

Coal.  The filthiest and most polluting fuel we've got.

This is exactly as I predicted.  It's time to give up on hypedrogen and go nuclear.

>>>>>"Coal. The filthiest and most polluting fuel we've got."
That's why hydrogen is necessary, in order to leave all the filth behind, and just use the clean H2 from home heating, industrial use, power generation, and transportation. All the ash, mercury, arsenic, radioactive material from coal can be reclaimed for industrial use, while the CO2 can be sequestered deep underground as supercritical fluid.

Even if we go nuclear, you will still need to produce H2 from nuclear energy for many roles that electricity cannot fulfill.

Using local fossil fuels to produce cleaner H2 for FCEVs, H2 trains, ships, airplanes and other uses, could be one of the quickest way for China and USA to reduce the pollution and GHGs created by energy generation, heating, industrial uses and ground-air-sea transportation means.

DME made with solar/wind hydrogen can power trains and ships.
It is a matter of capital investment and a desire for a cleaner world.

Clean hydrogen from coal? Really? The only clean coal is the coal not mined. Cleaning the air using a fuel cell is also a ridiculous concept. It would clean a minuscule amount of air and even then you have to clean the filter. This is not really any better than running a tier 4 diesel in a dirty environment.