Researchers at MIT and the Ford Motor Company have found that depending on the location, lightweight conventional vehicles could have a lower lifecycle greenhouse gas impact than electric vehicles, at least in the near term. Their paper is published in the ACS journal Environmental Science & Technology.

Assessments of GHG emissions from light-duty vehicles should take a cradle-to-grave life cycle perspective and capture important regional effects. We report the first regionally explicit (county-level) life cycle assessment of the use of lightweighting and electrification for light-duty vehicles in the U.S. Regional differences in climate, electric grid burdens, and driving patterns compound to produce significant regional heterogeneity in the GHG benefits of electrification. We show that lightweighting further accentuates these regional differences.

In fact, for the midsized cars considered in our analysis, model results suggest that aluminum lightweight vehicles with a combustion engine would have similar emissions to hybrid electric vehicles (HEVs) in about 25% of the counties in the US and lower than battery electric vehicles (BEVs) in 20% of counties. The results highlight the need for a portfolio of fuel efficient offerings to recognize the heterogeneity of regional climate, electric grid burdens, and driving patterns.

Lifecycle GHG emissions per km for different powertrain types (ICEV, LW-ICEV HEV, PHEV, and BEV) in selected counties. LW-ICEV here is one mass reduced through the use of aluminum. Wu et al.

The study looked at a variety of factors that can affect the relative performance of these vehicles, including the role of low temperatures in reducing battery performance; regional differences in average number of miles driven annually; and the different mix of generating sources in different parts of the US.

The study combined a variety of datasets to examine the relative impact of different vehicle choices down to a county-by-county level across the nation. It showed that while electric vehicles provide the greatest impact in reducing greenhouse gas emissions for most of the country, especially on both coasts and in the south, significant parts of the Midwest had the opposite result, with lightweight gasoline-powered vehicles achieving a greater reduction. 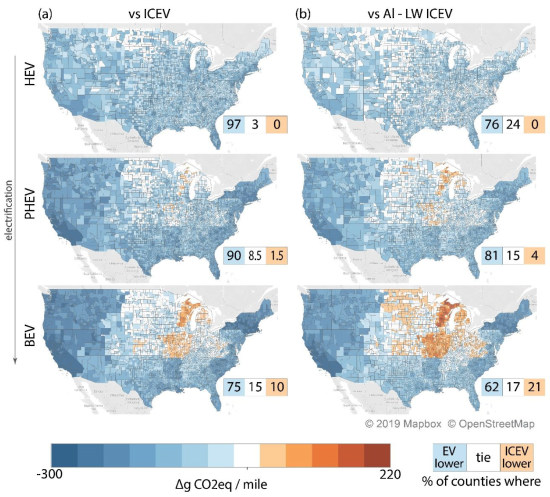 The biggest factor leading to that conclusion was the mix of generating sources going into the grid in different regions, said MIT Principal Research Scientist Randolph Kirchain. That mix is cleaner on both the East and West coasts, with higher usage of renewable energy sources and relatively low-emissions natural gas, while in the upper Midwest there is still a much higher proportion of coal-burning power plants.

That means that even though electric vehicles produce no greenhouse emissions while they are being driven, the process of recharging the car’s batteries results in significant emissions.

In those locations, buying a lightweight car, defined as one whose structure is built largely from aluminum or specialized lightweight steel, would actually result in fewer emissions than buying a comparable electric car, the study found.

The research was made possible by Ford’s collection of vehicle-performance data from about 30,000 cars, over a total of about 300 million miles of driving. They come from conventional midsize conventional gasoline cars, and the researchers used standard modeling techniques to calculate the performance of equivalent vehicles that were either hybrid-electric, battery-electric, or lightweight versions of conventional cars.

Kirchain said that the team tried to add as much spatial resolution as possible, compared to other studies in the literature, to try to get a sense of the combined effects of the various factors of temperature, the grid, and driving conditions.

That combination of data showed, among other things, that some of the areas with more carbon-heavy grids also happen to be colder, and somewhat more rural, he said. All three of those attributes can tilt emissions in a negative way for electric vehicles in terms of their impact on reducing emissions, he added. The combined effects are strongest in parts of Wisconsin and Michigan, where lightweight cars would have a significant advantage over EVs in reducing emissions, the study showed.

The impact of cold weather on battery performance is discussed in the EV literature, but not as much in the popular discussions of the topic, Kirchain observed. Conversely, gasoline-powered vehicles suffer an efficiency penalty in urban driving, but they have lower emissions in regions that are more rural and spread out.

The data on car performance the team had to work with thanks to their collaboration with Ford researchers was unique, Kirchain said, adding that ‘large’ studies of this type in the past would be a few dozen vehicles, with data coming mainly come from people who volunteered to share their data and therefore were more likely to be concerned about environmental impact.

By contrast, the extensive Ford data provided “a broader cross-section of drivers and driving conditions.”

Kirchain stressed that the intent of this study is not in any way to minimize the importance of switching over ground transportation to electric power in order to curb greenhouse emissions.

We’re not trying to undermine the fact that electrification is the long-term solution—and the short-term solution for most of the country.

However, over the next few decades—considered a critical period in determining the planet’s climate outcomes—it’s important to know what measures will actually be most effective in reducing carbon emissions in order to set policies and incentives that will produce the best outcomes, he said.

The relative advantage of lightweight vehicles compared to electric ones, according to their modeling, goes down over time, as the grid improves, but it doesn’t go away completely until close to 2050 or so.

Lightweight aluminum is now used in the Ford F-150 pickup truck, and in the all-electric Tesla sedans. Currently, there are no high-volume lightweight gasoline-powered midsize cars on the market in the US, but they could be built if incentives similar to those used to encourage the production of electric cars were in place, Kirchain suggested.

This is a significant advance. [This study] illustrates the importance of the regional disaggregation in the analysis, and that if it were absent results would be incorrect. This is an unequivocal call for regional policies that use the latest research to build rational agendas, rather than prescribing overarching global solutions.

—Heather MacLean, professor of civil and mineral engineering at the University of Toronto, who was not associated with this work

The problem is that gas is so cheap in the USA that most people in the market for a new car don't care about it. If it was more expensive there would be more "organic" pressure for economical vehicles. So if few people care, the companies won't develop and deploy the lightweighting technology. Hence they are asking for a push from government - unlikely with the current government.
or
you could view this as pointing to areas where they need to decarbonise the electricity supply.
- Anyone know where diesel cars would go on the graphs, I assume they are referring to petrol powered ones.

The average diesel car is about 20% better than the average gasoline car regarding tailpipe CO2; if we compare cars of similar size. If we compare a small gasoline car with a big diesel SUV, the latter would, of course, be worse, but I presume apples-to-apples comparisons is what is of main interest here. Then, some people also drive big gasoline SUVs and we all know how clever that is.

Studies are only as good as the assumptions made to bracket the data. Here we are again with a biased study that depends on the fuel source used to create charging current for the BEVs...I would think a study out of MIT would have been better vetted.

The critical statement there is "at least in the near term". Things are quickly turning in favor of electricity, and not just in transportation.

Other factors like clean air and less imported oil are important.

The 2050 "clean?" grid assumption will probably be completely wrong. Why? Demographics will for a faster clean transition. HVDC Supergrid, new PV and nuke tech, ...

Hybrid with better than Chevy Volt like capability should be minimum allowed standard nationwide. Why? Much less brake pollution, and city energy consumption.

What is never considered when comparing ICEs, BEVs, PHEVs etc. etc. is the complete system efficiency and the complete infrastructure.
1) E. g. the search for potential oil supplies via planes or satellites causes emissions and there are plenty fruitless searches.
2) Once a potential location is found, a test rig is erected to determine pressure and temperature and other parameters of a prospective well. If the results are satisfactory, then oil production can commence.
3) Transportation of crude oil via pipeline, trucks or tankers causes emissions.
4) The iron ore that is mined and "cooked" to steel uses immense amounts of energy for producing the rigs, pipelines, oil platforms and ocean-going-vessels and is the cause of uncountable emissions.
5) When crude oil has finally arrived at the refinery further emissions occur until usable fuels and other products are derived.
6) The distribution of the various fuels from the refinery - independent of the selected transportation mode - to the fuelling stations needs energy and is the cause of further emissions.
7) When an ICE is finally filled up at the fuelling station, the emissions-party really begins.
When all the emissions - that result in points 1 - 7 - are added together, then and only then you'll have a true representation of ICE emissions. With a true representation, ICEs will lose any comparison with an EV by miles and more.

Yes, assumptions selection can dictate results at will, especially in this study?