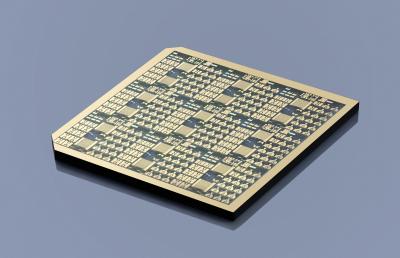 With a breakdown voltage of 1.8 kilovolts and a record power figure of merit of 155 megawatts per square centimeter, they achieve performance figures close to the theoretical material limit of gallium oxide.

At the same time, the breakdown field strengths achieved are significantly higher than those of established wide bandgap semiconductors such as silicon carbide or gallium nitride.

In order to achieve these improvements, the FBH team tackled the layer structure and gate topology. The basis was provided by substrates from the Leibniz Institute for Crystal Growth with an optimized epitaxial layer structure. As a result, the defect density could be reduced and electrical properties improved. This leads to lower on-state resistances.

The gate is the central switching point of field effect transistors, controlled by the gate-source voltage. Its topology has been further optimized, allowing to reduce high field strengths at the gate edge. This, in turn, leads to higher breakdown voltages.

The detailed results were published in IEEE Electron Device Letters.

If batteries had evolved at the same rate, the world would already have low cost extended range BEVs and lower cost small e-planes?

It's a pity that gallium is such a scarce element.  I bet that silicon carbide is going to be the most common high-power semiconductor material for the same reason silicon won out over germanium:  cost.