Adblue is injected selectively upstream of two SCR catalytic converters which are arranged in series. The system is used in the new Passat 2.0 TDI Evo with 110 kW (150 PS), which already meets the technical requirements of the future Euro 6d emission standard as a result. 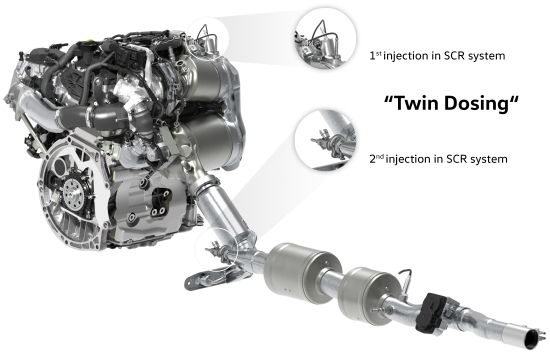 Current RDE (real driving emissions) measurements confirm Volkswagen’s type approval: in the new 2.0 TDI Evo with twin dosing, NOx levels are reduced by around 80% compared to the previous generation of the respective models.

Volkswagen will now gradually introduce the new technology to all models with 2.0 TDI Evo engines. Following the 2.0 TDI Evo with 110 kW (150 PS) currently fitted in the Passat, the new Golf—soon to see its world premiere—will likewise feature twin dosing in all TDI variants.

The twin dosing process compensates for a system-based disadvantage of diesel engines. Modern diesel engines emit less CO2 than gasoline engines because diesel fuel has a higher energy density and the combustion process is more efficient. Diesel engines are also subject to special requirements, however, since fuel combustion takes place with excess air. The main constituent of air is nitrogen and this reacts with oxygen during combustion, thereby forming nitrogen oxides.

Ammonia is needed to reduce the nitrogen oxides produced in diesel engines. It is injected as an aqueous reducing agent (AdBlue) via a dosing module into the exhaust gas upstream of an SCR catalytic converter. Here, the solution evaporates; the reducing agent is split, combining with steam to form ammonia. In the SCR catalytic converter, the ammonia (NH3) then reacts on a special coating with the nitrogen oxides (NOx) to form water and harmless nitrogen (N2)—the main constituent of the air we breathe.

The SCR coating is applied to the honeycomb structure of the diesel particulate filter, thereby enabling a single component to perform several functions. The close-coupled arrangement means that the exhaust gas temperatures required for high conversion rates can be achieved quickly after a cold start—the ideal range for conversion rates of more than 90% is between +220°C and +350°C. These conditions are met in many operating situations.

Conversion rates do not drop above +350°C thanks to twin dosing-system. Temperatures at this level occur for example when driving at high speeds on the motorway, at high engine speeds over prolonged periods of time and when driving uphill, especially if the vehicle is fully loaded or towing a trailer.

The Germans are fighting like mad to keep diesel alive.
And succeeding, technically; though the PR battle may be lost.
Diesel is now down to 31% of sales in Europe (down from 55% in 2011) - which probably makes sense as it was oversold to people who had low mileage requirements.
Anyone doing big mileage will probably benefit from this (whatever about their neighbours).

Wait a second, isn't diesel's higher energy density completely offset by higher carbon density? (As in, if you burn a specified volume of diesel, you'll get ~13% more energy than burning the same volume of gasoline, but you'll also get ~13% more CO2?)

@BH, sure, but it is still lower co2/km (than equivalent gasoline engines), Once they stopped the NOx cheating, it should be in the clear again and makes sense for high mileage drivers.

So, right now, diesel produces less CO2, has reduced NOX by 80% (some Mercedes diesels don't even register a NOX reading, their levels are so low), and it's recently been discovered that current direct-injection gasoline engines actually emit from 10 to 100 times more particulates than diesel. It seems to me that gas engines should be banned. Here's the link about the particulates: https://enrg.io/gasolne-engines-emit-particulates-diesels/

Impressive example: a VW Tiguan without OPF emitted 400x more particules in their tests than the same car with OPF (46×10^11 vs. 0.11×10^11 per km). If you go to https://www.adac.de/infotestrat/tests/eco-test/ and filter for VW Tiguan, Motorart = Otto, you get the 2 cars in question and can open individual results.

psmyth1956: Interestingly, your link is from 2017. The DUH, the german environmental organisation that has forced court ordered bans for very high NOx emitters in a few cities, has reported about this in 2011: (article in German)
https://www.duh.de/presse/pressemitteilungen/pressemitteilung/ultrafeine-feinstaubpartikel-auch-neue-benziner-brauchen-strenge-grenzwerte/

They tested a VW Golf 1.2 TSI and a BMW 116i, and the particulate numbers they measured were a desaster. They concluded that direct injection technology for petrol engines reduces CO2 emissions and is therefore useful, but should not be used without particulate filters.

This technology has been in discussion for some time now and VW has actually hinted about that this has been in the pipeline. It is simple to conclude that the NOx emission from diesel cars is no longer a real problem. Recall that SCR technology is relatively new in this vehicle type and progress is usually fastest after the introduction. Thus, it is no surprise that we now can observe just this.

The German ams magazine recently tested a Mercedes diesel car and got a PN level 25000 times lower than the limit. The next issue of the magazine will cover diesel emissions and presumably, will focus on just this topic. Now, we should realize that we cannot tell if the PN level is, e.g. 25000, 10000 or 1000 times below the limit. Current PN instruments simply are not good enough to measure such low levels. We can only say that the PN level is far, far below the limit and, in many cases, also significantly lower than ambient air levels. The car acts as an air cleaner.

Regarding CO2, one should note that CO2 is measured in the exhaust. There is no need to speculate about carbon (CO2) levels in the fuel in the tank. This is already taken into account on the regulation by measuring in the tailpipe. (Upstream emissions should, of course, be considered in a well-to-wheel analysis.) Diesel engines are more efficient than gasoline engines. This results in lower CO2. For comparable gasoline and diesel cars, the difference is about 20%. Since density for diesel fuel is higher than gasoline, the difference in volumetric fuel consumption is around 30%. If we look at CO2 per energy unit, the difference is (again) roughly similar to the mentioned 20% for CO2. The difference in fuel mass used is also around 20%, for the same reasons as above.

Since the diesel cycle is the most efficient thermodynamic cycle ever invented, it would be a great mistake to forbid, or by other means, try to ban this technology. In the foreseeable future, the use of fossil fuels will still be used and during this period we should do our utmost to reduce CO2 and energy use. Currently, the diesel engine has very bad publicity but it would deserve some credit for recent progress. If there is a diminishing market, manufacturers will not spend resources on its future development.

After a thorough reading of the article, I saw that the quote: "Modern diesel engines emit less CO2 than gasoline engines because diesel fuel has a higher energy density..." is wrong. Moreover, I think they should define what they mean with "energy density", simply because it could be interpreted in several ways. VW should check such statements better.