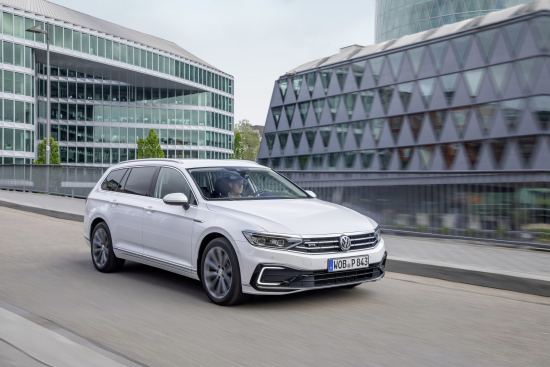 The purely electric range of the predecessor—determined as an NEDC value (New European Driving Cycle)—was 50 km. The new Passat GTE has a range of around 70 km in this cycle. Under the WLTP cycle, which is considered particularly similar to practical use, this figure reaches up to 56 km.

For longer distances and above 140 km/h (87 mh), the electric motor supports the Passat GTE’s efficient gasoline engine (TSI). The electric thrust acts like an additional booster, unfolding its very own dynamic, especially in sporty GTE mode.

Using the standard solution, the Passat GTE’s battery is charged externally via an interface in the front end (plug-in). However, the vehicle can also be charged while it is moving so that there is enough battery capacity for an emissions-free drive around your destination at the end of a long journey. This process is now even easier.

To charge the battery during the journey, the driver simply activates “Hybrid” mode in the Infotainment system. A battery divided up into ten segments then appears on the touchscreen. The driver can use this display to select how much of the battery’s capacity should be reserved for purely electric driving.

Once the vehicle has arrived at its destination, the battery is charged again as normal.

If this is ever available in the USA, it's what I'm going to want to replace my Fusion when it has to go.