Researchers at Georgia Tech have developed a promising new conversion-type cathode and electrolyte system that replaces expensive metals and traditional liquid electrolyte with lower cost transition metal fluorides and a solid polymer electrolyte. A paper on their work is published in the journal Nature Materials.

Rechargeable lithium-ion battery (LIB) is considered to be the most promising candidate to meet the future demands for energy storage devices including portable electronics and electric transportation. Unfortunately, the reduction in commodity cell price and improvements in energy density have plateaued due to the practical limits of intercalation-type cathode materials. Pushing it further may jeopardize cell safety by increasing the risk of runaway reactions that might lead to spontaneous ignition. Additionally, commercial nickel- (Ni) and cobalt- (Co) based minerals are scarce, expensive and toxic. The recent surge of Co prices (up to 90 USD kg-1) due to the rapid expansion of the LIB market, attracted attention to the violation of environmental norms and child labor laws and serious health hazards artisanal Co miners in Africa are often exposed to. If nothing changes, the future demand of Co for EVs and other applications may likely cause an increase in Co prices in the next decade, which, in turn, may slow down EV adoption.

Conversion-type cathodes, especially transition metal fluorides (MFs), are thus becoming of the highest interest due to their very high specific and volumetric capacities, which allow storing 1.5-2 times and 2-3 times more energy per given unit stack volume and mass, respectively, than those using conventional electrodes. … Among the MFs (including binary metal fluorides such as CuF2, and CoF2, or ternary metal fluorides, such as NiyFe1-yF2), the fluorides of iron, namely FeF3 or FeF2, which exhibit high specific capacity and are made from extremely low-cost iron ore (~0.1 USD kg-1), provide ultimate advantages for the massive adoption of the LIBs by the EVs.

Unfortunately, the researchers noted, such MF cathodes suffer from extremely poor performance at elevated temperatures, and suffer from poor ionic conductivity, significant volume (up to 30%) and morphological changes during cycling, active material dissolution, separation of LiF and M clusters, significant resistance buildup, and irreversible growth of the cathode electrolyte interphase.

The Georgia Tech team sought to overcome those obstacles by using the solid polymer electrolyte. 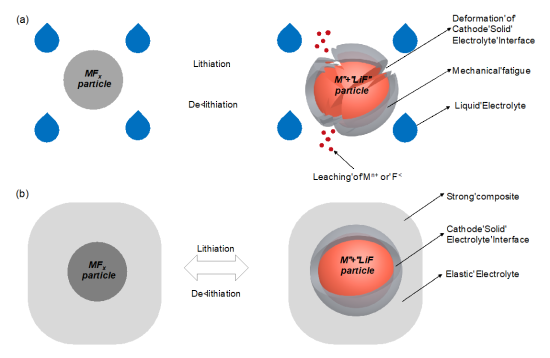 For the study, which was sponsored by the Army Research Office, the research team fabricated used iron fluoride for the cathode active material and a solid polymer electrolyte nanocomposite. Iron fluorides have more than double the lithium capacity of traditional cobalt- or nickel-based cathodes. In addition, iron is 300 times cheaper than cobalt and 150 times cheaper than nickel.

To produce such a cathode, the researchers developed a process to infiltrate a solid polymer electrolyte into the prefabricated iron fluoride electrode. They then hot pressed the entire structure to increase density and reduce any voids.

Two central features of the polymer-based electrolyte are its ability to flex and to accommodate the swelling of the iron fluoride while cycling and its ability to form a very stable and flexible interphase with iron fluoride. Traditionally, that swelling and massive side reactions have been key problems with using iron fluoride in previous battery designs.

Cathodes made from iron fluoride have enormous potential because of their high capacity, low material costs and very broad availability of iron. But the volume changes during cycling as well as parasitic side reactions with liquid electrolytes and other degradation issues have limited their use previously. Using a solid electrolyte with elastic properties solves many of these problems.

The researchers then tested several variations of the new solid-state batteries to analyze their performance over more than 300 cycles of charging and discharging at elevated temperature of 122 degrees Fahrenheit, noting that they outperformed previous designs using metal fluoride even when these were kept cool at room temperatures.

The researchers found that the key to the enhanced battery performance was the solid polymer electrolyte. In previous attempts to use metal fluorides, it was believed that metallic ions migrated to the surface of the cathode and eventually dissolved into the liquid electrolyte, causing a capacity loss, particularly at elevated temperatures.

The polymer electrolyte we used was very common, but many other solid electrolytes and other battery or electrode architectures—such as core-shell particle morphologies—should be able to similarly dramatically mitigate or even fully prevent parasitic side reactions and attain stable performance characteristics.

In the future, the researchers aim to develop new and improved solid electrolytes to enable fast charging and also to combine solid and liquid electrolytes in new designs that are fully compatible with conventional cell manufacturing technologies employed in large battery factories.

This material is based upon work supported by the Army Research Office under Grant No. W911NF-17-1-0053. Any opinions, findings, and conclusions or recommendations expressed in this material are those of the authors and do not necessarily reflect the views of the sponsors.

'In the future, the researchers aim to develop new and improved solid electrolytes to enable fast charging '

Low power density in and out?

Not necessarily the end of the world. Lower cost would enable higher capacity packs for cars and allow the use of hybrid chemistry packs (like the packs from Williams Advanced Engineering that was covered by this website on the 6th of this month). One can imagine for vehicles 100-150kWh packs that can deliver current to operate within normal highway speeds and a small high power pack for acceleration.

Similarly for electric aviation, we are right on the cusp of the required energy by weight for long distance flight. These would be extremely large packs (thousands of kWh’s), which would likely be able to provide enough power for takeoff. But even if not a relatively small high power pack to boost energy output for takeoff would be a pretty trivial addition.

Yes, a combo unit (this type of battery + super caps or other ultra quick charge-discharge units) could meet requirements for extended range EVs (650+ Km) and eventually for small commercial e-planes?