A team from Pacific Northwest National Laboratory (PNNL) and Idaho National Laboratory has evaluated the process economics and greenhouse gas (GHG) emissions for the conversion of 11 biomass feedstocks to produce transportation fuels via fast pyrolysis and then pyrolysis oil upgrading via hydrodeoxygenation. An open-access paper on their work appears in the journal Fuel.

The assumptions in the analysis are based on “field to wheel” data generated from a multistep experiment that started from biomass preparation and was followed by biomass feedstock conversion to pyrolysis oil, and then finished by pyrolysis oil upgrading to produce hydrocarbon liquid fuel.

They found that for all eleven feedstocks, the largest cost contribution to MFSP is capital-related costs, which is approximately 30%–40% of the minimum fuel selling price (MFSP) and includes capital depreciation, income tax, and return on investment. 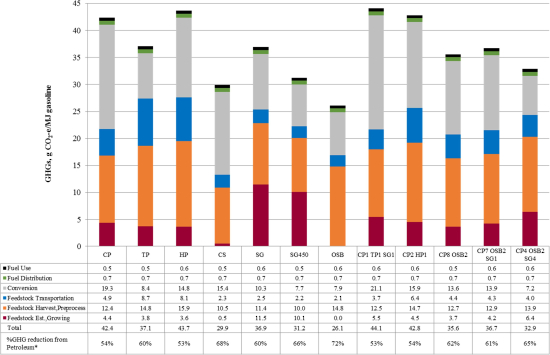 The final fuel product yield is one of the most significant parameters affecting the process economics.

They found that the highest product yield is from pine feedstock, while switchgrass feedstock gives the lowest yield. Using blends (woody mixed with herbaceous), with which the product yield is still reasonable, may further improve process economics compared to pure feedstocks because of the lower feedstock price for blends.

However, they observed that GHG reduction does not necessarily align with favorable economics.

Process parameters that most significantly affect the life cycle GHG emissions (from feedstock production to vehicle operation) are:

for all eleven feedstocks, the largest cost contribution to MFSP is capital-related costs, which is approximately 30%–40% of the minimum fuel selling price (MFSP) and includes capital depreciation, income tax, and return on investment.

In other words, product cost will increase rapidly if the duty cycle of the physical plant is reduced in order to operate on "renewable" energy.