On 20 August, the Indonesian-flagged 52,400 dwt bulk carrier Nur Allya, loaded with nickel ore, was reported missing in Indonesian waters. With no word on the fate of the missing crew of 25, INTERCARGO, the International Association of Dry Cargo Shipowners, expressed its concern for the missing crew and its “utmost concern and dismay for any responsible parties that might have contributed to this potential tragic loss of 25 lives” which may prove due to cargo liquefaction.

According to DNV GL, liquefaction is a phenomenon in which a soil-like material is abruptly transformed from a solid dry state to an almost fluid state. Many common bulk cargoes, such as iron ore fines, nickel ore and various mineral concentrates, are examples of materials that may liquefy. 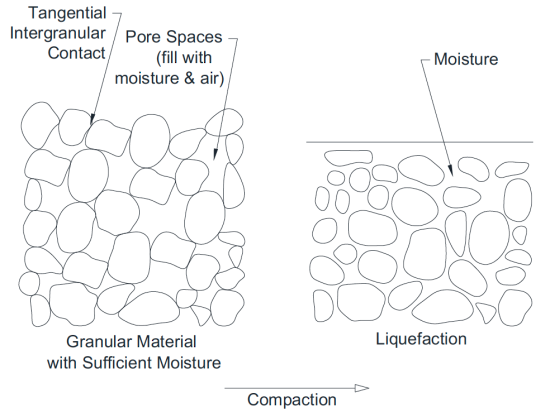 In a 2017 study on nickel ore bulk liquefaction, Hio Liang Lee from T&T Salvage Asia in Singapore observed that:

The shipping of unprocessed nickel ore in bulk can be risky if during the ocean voyage cargo in holds liquefied, impairing the transverse intact stability of the vessel. … Cargoes that are susceptible to liquefaction are those material loaded on board in loose and uncompacted form, comprise[d] of fine particles and sufficient moisture deposited between intergranular pores. In presences of dynamic loading at seas, the loose material on board the vessel tends to be compacted resulting in a decrease of intergranular spaces and increase of water pressure in the pore spaces. Subsequent to compaction, the increase of water pressure in intergranular pore spaces reduces the friction (intergranular contact pressure) between particles. Consequently, the shear strength of the cargo material deteriorates or lost and the cargo behaves like a viscous fluid.

… In response to the dynamic loading at seas, if liquefied cargo shift and slope toward the side of the cargo hold in synchronise with the roll motion of the ship, but not completely return or not return with a reverse roll. The ship may develop a severe list accumulatively and capsize abruptly.

This liquefaction of the cargo should not be mistaken with free surface effect (sloshing), according to a 2015 report on nickel ore liquefaction by Pandiman Philippines. During liquefaction the cargo undergoes a metamorphosis between a solid to a liquid. “This ability of the cargo to transform from an apparent solid state to a liquid one when the cargo has a high moisture content can have serious and catastrophic effects to the vessels stability and has resulted in vessels capsizing and sinking within minutes.”

Moisture-related cargo shifting and incidents on voyage, widely known as liquefaction, continue to be a major concern for dry bulk shipping, as our Association has highlighted in earlier notes this year. It is indeed frustrating to see a lack of consolidated efforts and commitment from all stakeholders including Shippers, Receivers and Port State authorities at load and discharge ports to eliminate the problem and safeguard the lives of innocent seafarers, despite a heightened awareness of the problem by the industry through various publications produced by the P&I Clubs and Industry associations.

The IMSBC Code governs the safe carriage of solid bulk cargoes. This became a mandatory instrument under SOLAS Convention in 2011. Under IMSBC Code (2016 edition), solid bulk cargoes can be classified into three categories and among these, Group A cargo is that which may liquefy if shipped at a moisture content (MC) in excess of their transportable moisture limit (TML).

The Transportable Moisture Limit of cargo is the maximum gross water content by weight that liquefiable solid bulk cargo may contain during transport without risk of liquefaction. By its nature, nickel ore is a cargo which may liquefy if the MC of the material exceeds its TML.

Amendments to the IMSBC Code entered into force on 1 January 2019. For nickel ore, the amendment specifies that “the moisture content of the cargo shall be kept less than its TML during loading operations and the voyage.”

Although the cause of the potential casualty is not known and must be established by prompt investigation by the Indonesian Authorities, INTERCARGO urges all Ship Owners, Operators and Seafarers to exercise extreme caution when accepting, for carriage, Nickel Ore and other cargoes that have the potential to liquefy. We would like to stress the importance of adhering to the provisions in the International Maritime Solid Bulk Cargoes Code (IMSBC Code) to ensure the safety of lives at sea and the safe transportation of dry bulk cargoes.

a: Sounds like an Aberfan at sea - 53 years after the said disaster.

b; Sounds like they need some automatic disaster reporting on these ships so they don't just disappear without trace (solar, gps, radio, buoyancy).

c: I wonder if they ventilated the cargo better could they get rid of excess moisture, or is a cargo of that size too "deep" to ventilate in any meaningful way.

If they loaded the holds almost full, there would be no way for the cargo to shift in this way.  This would require odd distribution of weight to avoid overloading the ship, though; it might not be practical.