More than two people are killed every day on US roads by drivers running through red lights, according to data analysis performed by the AAA Foundation for Traffic Safety. The most recent crash data available shows 939 people were killed in red light running crashes in 2017—a 10-year high and a 28% increase since 2012.

Number of Deaths in Red Light Running Crashes as a Percentage of All Deaths in Crashes at Signalized Intersections, by Year, United States, 2008-2017 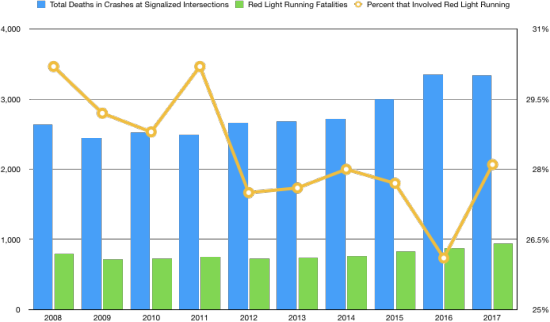 With the number of red light running crashes on the rise, AAA calls for drivers to use caution when approaching signalized intersections, and for pedestrians and cyclists to stay alert when crossing the street.

According to the AAA Foundation:

According to the AAA Foundation’s latest Traffic Safety Culture Index, 85% of drivers view red light running as very dangerous, yet nearly one in three say they blew through a red light within the past 30 days when they could have stopped safely. More than 2 in 5 drivers also say it is unlikely they’ll be stopped by police for running a red light.

The Insurance Institute for Highway Safety (IIHS) found that when properly implemented, red light cameras reduced the fatal red light running crash rate of large cities by 21% and the rate of all types of fatal crashes at signalized intersections by 14%.

Deaths caused by red light running are on the rise. Cameras increase the odds that violators will get caught, and well-publicized camera programs discourage would-be violators from taking those odds. Camera enforcement is a proven way to reduce red light running and save lives.

Established in 1947 by AAA, the AAA Foundation for Traffic Safety is a nonprofit, publicly funded, 501(c)(3) charitable research and educational organization. The AAA Foundation’s mission is to prevent traffic deaths and injuries by conducting research into their causes and by educating the public about strategies to prevent crashes and reduce injuries when they do occur. This research is used to develop educational materials for drivers, pedestrians, bicyclists and other road users.

I wonder how many of those drivers were on their phones ....

I would categorise two very distinctive cases:
- running red light on purpose, just when the light changes, yes a problem but not a huge one.
- running red light when distracted (on the phone), this is a huge problem and results in crash nearly every time.