Electric Assisted Vehicles Limited (EAV) has received orders for its EAVan from the Norwegian postal and parcel logistics company Posten Norge and its sister logistics and parcels company Bring.com. The EAVan is an eCargo bike with a capacity of between 1m³ to 3m³ and 120kg of weight operating under the current regulations for eBikes. 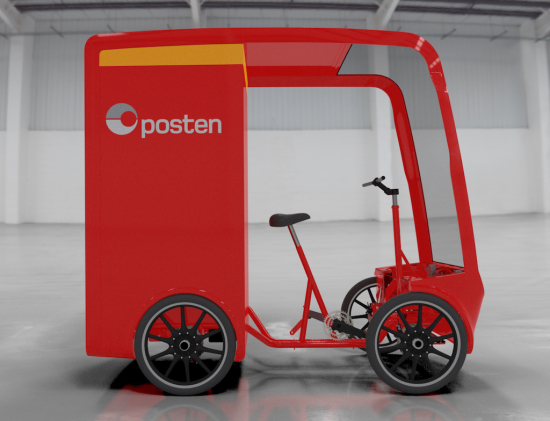 EAV, which sprang from a technology-based motorsports and automotive background, recognized that adaptation from the use of Light Commercial Vehicles or gasoline and diesel ‘vans’ to using eCargo bikes would require a culture-of-use change, so have engineered the EAVan ‘down’ from a van rather than ‘up’ from a bicycle. This is the underlying philosophy of EAV, to produce an efficient and functional vehicle which operators are happy to use and to be protected from the elements.

We wanted the EAVan to be as usable as possible by anyone. Getting people out of vans and onto eCargo bikes isn’t easy if they think it’s going to be an awful experience. Being exposed to the elements or being low to traffic isn’t going to appeal to anyone and we’re all very used to being comfortable in a car or van. So, we started with the idea of the outer body of a light commercial van and we added the electric pedal-assist propulsion system.

This kind of vehicle is a very good alternative for us to adapt to new regulations of traffic in urban areas. At the same time, we can also contribute to a better environment and reduced congestion. We will test the bikes in Nordic cities, to see how we can use them efficiently and serve our customers as good as possible. This is also important to improve the quality of the environment in inner-city areas and for us to reach our goal to only use CO2-free vehicles before the end of 2025.

City logistics in the future will be operated with smaller vehicles that are more adapted to the area that the operate in. Norway Post are working on several areas to achieve a greener last mile, for example through the cooperation in #BelovedCity with the recycle company Ragn-Sells and the real estate company KLP.