The CUPRA Tavascan Electric Concept—the first road CUPRA to use a 100% electric powertrain—will make its world debut at this year’s IAA Frankfurt International Motor Show. CUPRA is a brand of SEAT (earlier post), a member of the Volkswagen Group.

Based on Volkswagen Group’s MEB platform, the electric vehicle is equipped with a 77kWh battery pack for an all-electric range of up to 450km (280 miles). The CUPRA Concept is powered by two electric motors—one on the front axle and one on the rear axle—for a total output of 225kW (306PS).

Besides the CUPRA Formentor, which will be launched in 2020 alongside two other high-performance plug-in hybrid models, we have already proved our technological capabilities by developing the world’s first 100% electric touring car, the CUPRA e-Racer. With the presentation of the all-electric CUPRA Tavascan concept, we are translating this vision into the streets and proving that performance can be electrified. 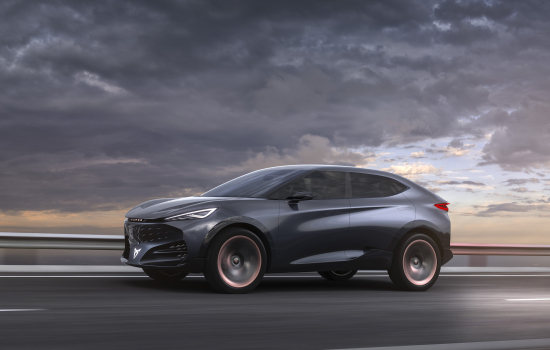 The four-door crossover coupe marries the presence of an SUV with the sleekness of a sporty coupe. The CUPRA Tavascan Electric Concept can reach 100km/h in less than 6.5 seconds.

The vehicle’s front design emphasizes its electric personality with an illuminated CUPRA logo that sits low, providing a totally different focal point. Each vent delivers efficiency increases, allowing air to flow smoothly over the body, or internally to cool the battery pack.

This extended range e-unit will probably be built in China for the Asian market?

Good looking, you don't build them if you can't sell them.

Looking Awesome, Eagerly waiting for this car to come on the road.