The electrocatalytic reduction of CO2 is often carried out in a liquid electrolyte such as KHCO3(aq), which allows for ion conduction between electrodes. However, as a result, liquid products that form are in a mixture with the dissolved salts, and require energy-intensive downstream separation.

Now a team led by researchers at Rice University has achieved continuous electrocatalytic conversion of CO2 to pure liquid fuel solutions in cells that utilize solid electrolytes, in which electrochemically generated cations (such as H+) and anions (such as HCOO−) are combined to form pure product solutions without mixing with other ions.

In a paper on their work in the journal Nature Energy, the report demonstrating the production of pure formic acid (HCOOH) solutions with concentrations up to 12 M. They also reported 100 h continuous and stable generation of 0.1 M HCOOH with negligible degradation in selectivity and activity.

Production of other electrolyte-free C2+ liquid oxygenate solutions, including acetic acid, ethanol and n-propanol, were demonstrated using a Cu catalyst. 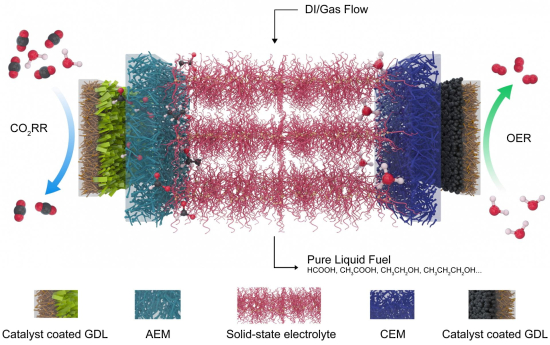 Schematic illustration of the CO2 reduction cell with solid electrolyte. At left is a catalyst that selects for carbon dioxide and reduces it to a negatively charged formate, which is pulled through a gas diffusion layer (GDL) and the anion exchange membrane (AEM) into the central electrolyte. At the right, an oxygen evolution reaction (OER) catalyst generates positive protons from water and sends them through the cation exchange membrane (CEM). The ions recombine into formic acid or other products that are carried out of the system by deionized (DI) water and gas. Illustration by Chuan Xia and Demin Liu

Two advances made the new device possible, said lead author and Rice postdoctoral researcher Chuan Xia. The first was his development of a robust, two-dimensional bismuth catalyst and the second a solid-state electrolyte that eliminates the need for salt as part of the reaction.

Bismuth is a very heavy atom, compared to transition metals like copper, iron or cobalt. Its mobility is much lower, particularly under reaction conditions. So that stabilizes the catalyst.

The reactor is structured to keep water from contacting the catalyst, which also helps preserve it.

Xia said the nanomaterials can be made in bulk.

Currently, people produce catalysts on the milligram or gram scales. We developed a way to produce them at the kilogram scale. That will make our process easier to scale up for industry.

The rate at which water flows through the product chamber determines the concentration of the solution. Slow throughput with the current setup produces a solution that is nearly 30% formic acid by weight, while faster flows allow the concentration to be customized. The researchers expect to achieve higher concentrations from next-generation reactors that accept gas flow to bring out pure formic acid vapors.

The Rice lab worked with Brookhaven National Laboratory to view the process in progress.

X-ray absorption spectroscopy, a powerful technique available at the Inner Shell Spectroscopy (ISS) beamline at Brookhaven Lab’s National Synchrotron Light Source II, enables us to probe the electronic structure of electrocatalysts in operando. In this work, we followed bismuth’s oxidation states at different potentials and were able to identify the catalyst’s active state during carbon dioxide reduction.

Rice and the US Department of Energy Office of Science User Facilities supported the research.

While all this is cool, IMO, it is better not to generate the CO2 in the first place (or just plant trees).
Thus, the case were they were creating CNTs from CO2 and using it to reinforce concrete and steel is good, because you end up then needing less concrete / steel, and this is the big win.

We are not all going EV, so reducing CO2 to make fuels helps.

More to the point, we need plenty of carbon-based things other than fuels.  Being able to make them directly from CO2 is a big win.

The current carbon extractive industries are the major contribution to on own imminent destruction let alone the uncountable other species so plain to recognise how important and desirable these alternative options are.