CRU analysts observe that lithium prices have steadily declined since the end of Q1, finally crashing through the $10/kg LCE mark at the end of July.

Weaker-than-expected demand in China is partly responsible, but the main driver has been the ongoing avalanche of new supply into the market, as plentiful cheap spodumene meets ample conversional capacity in China, the CRU analysts said.

While many are forecasting long-run prices for lithium in the mid-teens LCE, citing refinery bottlenecks and the potential for ramp-up delays in the mining and refining sector, CRU disagrees. It continues to forecast that lithium prices will be governed by cost fundamentals and that this will result in sustained lithium prices in the single-figures.

China is the world’s largest user of lithium, accounting for 57% of global demand in 2019, and is also the biggest supplier of lithium converted products. 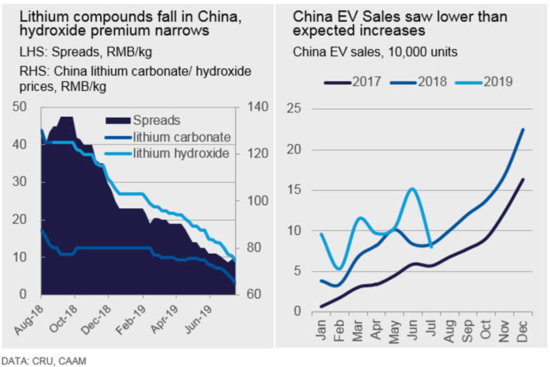 The real driver of lower lithium demand, according to CRU, has been disappointing BEV uptake. Chinese EV sales through to July totalled 696,000 this year, an impressive 41.5% y/y increase but nonetheless lower than expected by the market. There are two main reasons for this, the analysts suggested:

CRU expects to see some marginal improvements on the demand side in the coming months, as Q4 is generally a busier buying season. However, the analysts nonetheless believe that low spodumene prices and ample conversion capacity will cause prices to continue their decline in the short-term.

Another key factor which has contributed to the decline in lithium prices is the surge in mine supply. The price explosion in 2016-2018 prompted widespread interest and investment in lithium projects across the world as hard rock mining came to the fore. Nowhere is this more the case than in Australia, where six spodumene mines have commenced production in just three years.

Despite cutbacks, CRU’S mine supply forecast remains plentiful over the next few years, and it will likely be a similar story looking further ahead.

CRU’S current estimates for 90th percentile spodumene production costs are currently around $525/t, equivalent to around $8,000/T LCE. The 90th percentile will naturally rise over time as longer-term demand requirements will necessitate higher-cost hard rock projects to enter the market, but THE long-run cost modelling does not suggest that this would necessitate prices returning to 2017-2018 levels.

CRU continues to forecast strong lithium demand growth as a result of the worldwide roll-out of electrified vehicles,; its 5-year demand forecasts are not materially different from that of other market participants.

But strong demand does not immediately translate into high prices, and long-term lithium prices will be governed by cost considerations which place them much lower than 2017-2018 levels. While refinery bottlenecks could cause some short-term volatility in lithium prices (like in all commodity markets), they will not be enough to cause sustained high prices at unjustifiable levels.

All near and long term electrified vehicles (small to very large, HEVs, PHEVs, BEVs and FCEVs) will require more and more up-to-date batteries unless more on board higher efficiency solar cells are used.

None-lithium batteries are still many years away and lithium may have to be used for 10+ more years?