Home About Contact RSS GCC Twitter Newsletter
AVL and Silicon Mobility collaborate to boost EV efficiency; 250kW inverter-eMotor system
More than half of transit buses in the US were powered by alternative fuels and advanced technologies in 2018

Micromobility (defined as shared bikes, e-bikes and e-scooters) could deliver substantial benefits to consumers and businesses around the world, including efficient and cost-effective travel, reduced traffic congestion, decreased emissions and a boost to the local economy.

According to the National Association of City Transportation Officials’ trip distance estimates, scooters are frequently used for trips between a half-mile and a mile, whereas bike distances are typically between one mile and three miles.

Analyzing more than 50 million anonymous car trips, INRIX Research found that 48% of all car trips in the most congested US metro areas are less than three miles (20% > 1 mile, 16% 1-2 miles and 12% 2-3 miles). If a fraction of these vehicle trips were replaced with scooter and bike trips, American cities could reap significant benefits.

Analyzing trillions of anonymous data points from hundreds of millions of connected devices, INRIX ranked the top American, British and German cities where micromobility services have the most potential to reduce vehicle trips.

Honolulu, Hawaii; New Orleans, Louisiana; and Nashville, Tennessee are the Top 3 cities with the greatest profile for micromobility to succeed and reduce vehicle trips in the US, according to INRIX. These cities also feature warm climates with minimal topographic variation, providing further support for micromobility.

The high proportion of short-distance trips—independent of a city’s density or public transit network—highlights the universal potential for shared scooters and bikes. While automobile-centric sunbelt cities such as Dallas (ranked 19th) and Phoenix (ranked 23rd) have a lower proportion of 0-1 mile trips (18% and 17%, respectively) compared to denser cities such as Chicago or New York (both 22%), the small variation across all metros indicates the universal suitability for micromobility services, INRIX says. 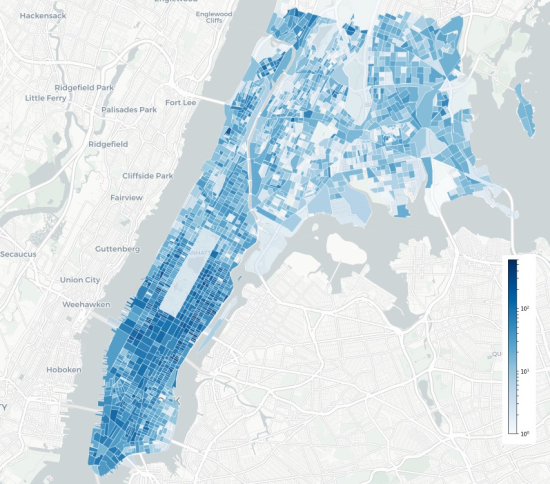 With congestion tolling and the expansion of protected bike lanes in New York City, shared micromobility services could safely provide critical first- and last-mile connections to neighborhoods throughout the city.

Leveraging big data to plan for micromobility services. Micromobility can replace short distance vehicle trips and provide currently underserved first- and last-mile solutions for public transit riders. The ultimate success of these new modes will be predicated on two key steps: cities having a clear understanding of where micromobility is best positioned to offset vehicle travel; and cities having the necessary tools to engage with and manage these services. Leveraging trip data and insights can provide a foundational view of how people move through a city’s road networks.

In July, INRIX expanded its Road Rules platform to include support for rules and regulations for on the road, at the curb, and on the sidewalk for micromobility offerings, including features like bike lanes and pick-up/drop-off areas for dockless scooters or bikes.

Road Rules is a cloud-based platform that enables cities and road authorities to digitize and store all of their mobility information in a centralized location.

Shared bikes and scooters sound like a good idea, but tend to get abused and flung everywhere, especially scooters.
Scooters have a life "in the wild" of 3-6 weeks in some cities, and so aren't all that green either.
Personally owned scooters (and bikes) won't have that problem.

Perhaps one day you will ride an electric bus into the city and get off at the scooter hub where you get a ES(electric scooter) and ride from there to the office, etc.