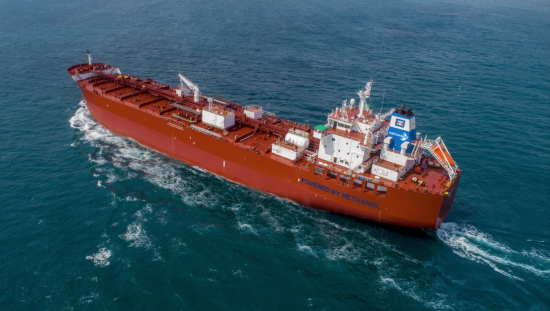 The 49,000 dwt vessels are built with the second generation of MAN B&W ME-LGIM two stroke dual-fuel engines that can run on both methanol and conventional marine fuels.

MAN Energy Solutions developed the ME-LGIM dual-fuel engine for operation on methanol, heavy fuel oil (HFO), marine diesel oil (MDO) or marine gas oil (MGO). The engine is based on the company’s proven ME series, with approximately 5,000 engines in service, and works according to the diesel principle as methanol is a low-flashpoint, liquid fuel.

When operating on methanol, the ME-LGI uses HFO, MDO or MGO as a pilot fuel, significantly reduces emissions of CO2, NOx and SOx, and does not have any methane slip. Additionally, any operational switch between methanol and other fuels is seamless.

Tests on the engine, when running on methanol, have recorded the same or a slightly better efficiency compared to conventional HFO-burning engines. MAN developed the ME-LGI engine concept in response to interest from the shipping world to operate on alternatives to heavy fuel oil.

The vessels join the seven existing methanol-fueled vessels chartered by Waterfront Shipping. These existing vessels have surpassed more than 50,000 operating hours running on methanol in compliance with IMO 2020 emissions regulations.

The two new vessels—together with an additional two vessels that will be delivered to Waterfront Shipping by year-end—are also able to meet IMO Tier III emissions standards without the need for exhaust gas after treatment.

We are very excited by the performance of our first seven methanol-fueled vessels that have proven the safety and reliability of the technology. With this second generation of vessels, we will benefit from innovative technological advances that will continue to optimize performance and efficiency.

On an energy-equivalent basis, methanol is cost competitive over energy price cycles and we see significant value creation opportunities from using a methanol flex-fuel engine. We are proud that approximately 40 percent of our fleet will be powered by methanol-fuel technology by the end of the year.

Methanol is one of the world’s most widely traded chemicals and is available globally at major ports. In addition to IMO 2020-compliant SOx emissions and the ability to meet Tier III NOx regulations without exhaust aftertreatment, methanol can also provide a pathway to meeting future carbon emission reduction targets when it is produced from renewable sources.

We developed the ME-LGIM engine in response to interest from the shipping world in alternatives to heavy fuel oil. With the growing demand for cleaner marine fuels, methanol is a sulfur-free alternative that meets the industry’s increasingly stringent emission regulations. We are also very happy to collaborate once again with Methanex, whose vessels have showcased the benefits of operating on methanol and that meeting Tier III limits is possible through mixing methanol with water. Furthermore, a methanol-burning engine can enable the vessels to meet future greenhouse-gas emission standards as methanol can be produced in a carbon-neutral fashion from renewable sources. As such, the ME-LGI concept is mature technology and MAN Energy Solutions looks forward to exploring its many possibilities in the future.

Methanex is a Vancouver, Canada-based, publicly traded company and is the world’s largest producer and supplier of methanol to major international markets.

Can we sense that there is a competition between methanol and LNG as "clean" fuels in shipping? There is, of course, no doubt about the preferences by Methanex Corporation in this case.

Either would do. Methanol can be made from H2 and CO2 so there may be some extra benefits CO2 wise, but both would be way cleaner than bunker fuel oil.
IMO, methanol is a great possibility for fossil CO2 reduction, particularly in a HEV or PHEV or serial hybrid - no need to lug 60-100 KwH batteries around with you - get by with 6-12 KwH.
(Or 1-3 in a HEV situation).

Methanol and methane have the same ratio of hydrogen energy input to output, i.e. energy efficiency of conversion. But methanol does not have to lose additional 2-digit percentage points of energy for liquefaction.

Methanol can be stored in un-insulated tanks of any form (not pressure tanks).

Only drawback compared to LNG is lower energy density. However, when including the volume required for insulation of LNG tanks, the system-volumetric-energy-density is probably similar.

The news here is you don't have to burn bunker oil in diesel engines; there are good intermediate steps to reduce emissions while waiting for clean energy solutions to progress to the feasibility stages.

"..use of diesel blended with up to 20% of methanol by volume requires only minor engine modifications"

The thing I find interesting about the potential for methanol over fuel oils is that a pre-mixed fuel charge can burn to completion faster than injected liquid fuel.  Not only is the premix going to prevent soot formation from rich spots and NOx from hot spots, earlier combustion means that more of the heat of combustion gets converted to work.

We'll know the efforts are really serious when exhaust heat is reclaimed to crack methanol to CO and H2, recycling it back into fuel.