Researchers team up algae and bacteria to boost hydrogen production

Researchers Neda Fakhimi, Alexandra Dubini and David González Ballester report being able to increase hydrogen production by combining unicellular green alga called Chlamydomonas reinhardtii with Escherichia coli bacteria. The teamwork of the algae and bacteria resulted in 60% more hydrogen production than they are able to produce if algae and bacteria work separately. Their paper appears in the journal Bioresource Technology. 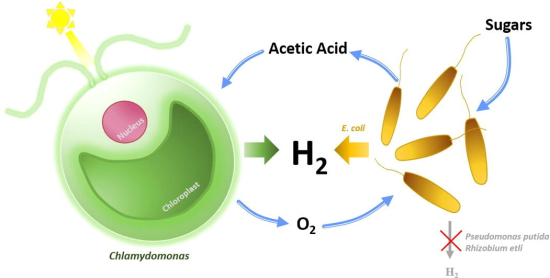 This study is a proof of concept for the synergetic biohydrogen production in alga-bacteria co-cultures. Algal hydrogen photoproduction was obtained in sugar-containing media only when the green alga Chlamydomonas reinhardtii was co-cultured with Pseudomonas putida (40.8ml H2·L−1), Escherichia coli (35.1ml H2·L−1) and Rhizobium etli (16.1ml H2·L−1). Hydrogen photo-production in these co-cultures was not only linked to the induction of hypoxia, but to the ability of the bacteria to produce acetic acid from sugars.

Synergetic hydrogen production was achieved by integrating the photobiological and fermentative production in Chlamydomonas and Escherichia coli co-cultures supplemented with glucose, which resulted in 60% more H2 production than the sum of the respective monocultures. This cooperation relied on the ability of the alga to consume the excreted bacterial acetic acid, which benefited both bacterial and algal hydrogen production. This knowledge may open new possibilities for the biohydrogen production from industrial wastes.

When alga works on its own, it produces hydrogen via photosynthesis whereas bacteria make hydrogen via sugar fermentation. The key to the synergy between algae and bacteria is acetic acid.

This acid, in addition to providing the smell and taste of vinegar, is separated by bacteria during hydrogen production. Accumulation of acetic acid where the bacteria is found is seen as a problem: it causes the fermentation mechanism to stop and, therefore, so does its hydrogen production. That is where the microalgae comes into play, as they take advantage of the acetic acid in order to produce more hydrogen.

Thus, the microalgae benefit from what the bacteria do not want; together they become more efficient.

The potential of the algae-bacteria combination has been proven and opens the doors to its being used in industry since the sugar added for bacteria fermentation in the lab can be transferred to waste in the real world. In other words, the relationship between algae and bacteria could use industrial waste and dirty water to produce hydrogen and decontaminate at the same time.

I was looking at this thinking "what a waste of sugar" until I got to the end.  Using wastewater as the carbon source changes everything.  Now if this mix could be co-cultured along with e.g. water hyacinth to extract eutrophying pollutants like phosphate and nitrate and add another source of fixed carbon to feed the process, you might really have something.