Toyota Motor Corporation has developed a stationary fuel cell generator (FC generator) that makes use of the fuel cell system (FC system) equipped in the Mirai Fuel Cell Electric Vehicle (FCEV). The FC generator has been installed within the Honsha plant grounds in Toyota City, Aichi Prefecture, and verification tests have now commenced.

The FC generator uses two each of the FC system components equipped in the Mirai, including its FC stack, power control unit (PCU), and secondary battery. By using components from the Mirai FC system, Toyota seeks to produce a high-performance generator at a reasonable price. Development on the generator was carried out jointly by Toyota and Toyota Energy Solutions, Inc. 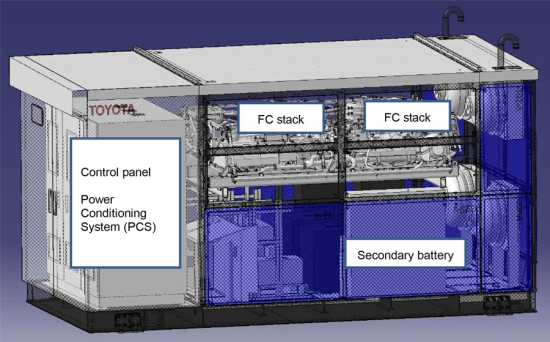 For the verification tests, the electricity generated by the FC generator will be used inside the Honsha Plant; the generator will operate continuously for 24 hours per day, and generate a rated output of 100 kilowatts.

The energy efficiency—the amount of electricity it generates per unit of hydrogen—the stability of the generated output, and the durability and ease of maintenance of the generator will be verified and evaluated. 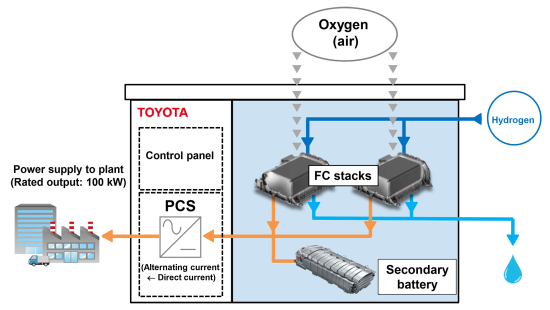 Based on the results of the verification tests, Toyota intends to use FC generators as private power generators in an increasing number of plants. The generators will be fueled by hydrogen emitted both during the production process for FC system components, as well as during evaluation and testing processes; in this way, Toyota intends to develop and implement technologies that make effective use of hydrogen.

In 2015, Toyota announced its Toyota Environmental Challenge 2050, one of which was the Plant Zero CO2 Emissions Challenge. In order to fulfil this challenge, Toyota will continue to steadily engage in reducing the amount of CO2 it emits during its production processes.

As part of its efforts to expand use of the FC system it developed for the FCEV, Toyota intends to consider the practical realization of the FC generator. This entails carrying out research and development and discussing the establishment of business models aimed at improving the generator's product appeal, by enhancing its energy efficiency and durability, making it more compact, and reducing costs. 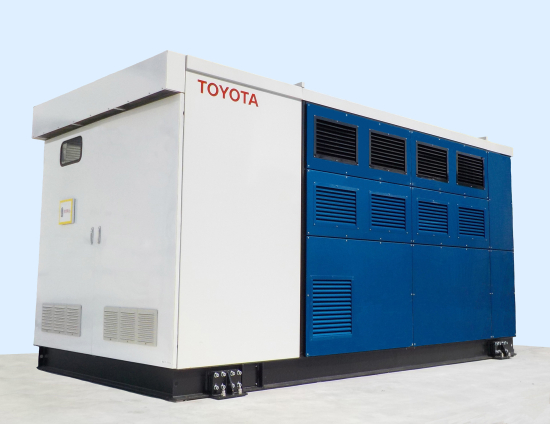 They are running this at half the output they use in the Mirai, presumably to optimise efficiency/longevity.

The set is also surprisingly bulky, but a fine zero pollution alternative to a diesel generator.

SOFC/SOEC would be more efficient for storing RE.
SOFC can combine cycle with gas/steam turbines.

Where do they get the hydrogen from? That will determine whether it's non-polluting or not. Not the fact that it makes only electricity and water vapor on site. "Fueled by hydrogen emitted both during the production process for FC system components, as well as during evaluation and testing processes" makes no sense to me, or at least is not sustainable. What H2 is emitted during production?

But kudos to them for this pilot system for developing and verifying a stationary power solution in a container.

They show hydrogen coming in,
put an electrolyzer there for no fossil CO2 if you use renewal electricity contracts or reform renewable methane.
You can store the H2 for a UPS system to power banks and hospitals.

They will be running it 24 hours a day. This is definitely an interesting longevity test. I would think that the Mirai stack was designed to last 150,000 miles (5000 hrs ?), unlike the heavy duty stacks designed for heavy trucking or power generation. 5000 hours is only 208 days.