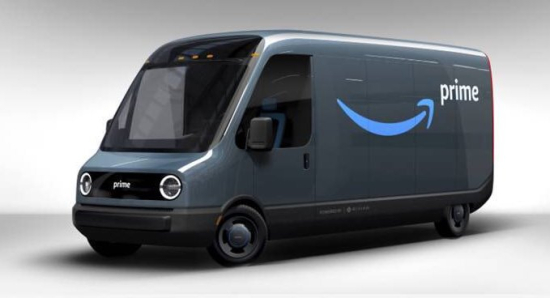 Amazon invested $440 million in the Michigan-based startup producer of electric vehicles as part of a $700-million investment round announced in February 2019. (Earlier post.)

The delivery van would be Rivian’s third production electric vehicle, behind the already announced pickup (R1T) and SUV (R1S)—both of which the company has positioned as Electric Adventure Vehicles.

The announcement came alongside the company’s announcement of its co-founding of the Climate Pledge, a commitment to meet the Paris Agreement 10 years early. Amazon is the first signatory of this pledge. The Climate Pledge calls on signatories to be net zero carbon across their businesses by 2040—a decade ahead of the Paris Accord’s goal of 2050.

Very smart of Amazon to make better use of the investments in Rivian while reducing pollution and GHGs?

Ford and others try a few conversions, Amazon and Rivian DO it.

We must be near the crossover point where it is cheaper to run a battery electric urban delivery vehicle compared to the overall cost of owning and operating a diesel vehicle. Once this happens, there will be a large demand to go electric.

Which begs the question:  how much carbon does the electric generation create?

"Renewable energy credits" are a bookkeeping fraud in which the "renewability" gets sold to someone who is using largely fossil-based energy and the blame for the carbon emissions gets assigned to someone else.  This can only go so far, and it is already counterproductive.  It is pushing off the need to firm up "renewables" so they truly supply 24/7 power, which is a problem that should already have been solved but still has not been.

One of the problems that "renewables" have with storage is that adequate storage works to the advantage of nuclear power (storing overnight surpluses for day-time needs) much more quickly and cheaply than it does for wind and PV with their days-long cycles and sometimes weeks-long hiatuses.  Nuclear is simply better at supplying essential needs, no matter how much "Greens" hate that fact.

The Amazon Business Model is dependent on solving the major of delivering goods timely and economically,...look for Amazon and others with major online stores, i.e., Walmart, Target, etc., to invest heavily in their own transportation systems...Drones, Electric Vans, Cargo aircraft and perhaps packages with wings gliding down from the Heavens.

If the nuclear industry in USA-Canada-EU could reduce the initial cost by 3X, NPPs could be back in business?

Near future smaller nuclear units will not reduce current high cost but may double the total initial cost, according the a recent independent study.

Completely redesigned NPPs may be required to take the cost of energy produced below 10 cents/kWh.

There is nothing wrong with a financial system based on subsidies for energy produced by clean REs paid by carbon and pollution emitters.

Of course, this system, if properly dosed, would progressively make CPPs and NGPPs and ICEVs operation less competitive and reduce pollution and GHGs.

EV are great for delivery usage as the distance to be travelled is known, and you can use EVs for the runs "in range" and diesel or hybrid for the long runs.
It shouldn't be too difficult to cover every building you own with solar panels, if you are big and clever like Amazon (or Google or UPS or Walmart, etc.)
On second thoughts, you won't be able to charge them from solar as they will be out running when the sun is up.
Either do a time shift "EV credit" or install / buy windmills so they can generate electricity at night when you are charging (or double up on batteries - expensive!)
No new technology needed here, just organisation and willpower.

I wonder how many R&D vans they will run through before they hit full production.

The demand is there, created by these mega sized companies, others will soon follow!

Another cool thought is the fact the roads themselves can become charging stations.

What AlzHarvey can't acknowledge (because it would violate his terms of employment) is that a nuclear plant such as a NuScale in CHP service can produce electricity and heat, on-demand and regardless of weather, cheaper than almost anything else out there.  Suppose a NuScale does come in at an installed cost of $5000/kW(e).  This corresponds to a cost of roughly $1667/kW(t), much of which can be produced at the same time as electric generation (there are tradeoffs as the required heat temperature goes up).  If you can produce 120 MW(t) at 50% capacity factor in addition to 60 MW(e), at this year's average Henry Hub price of about $3/mmBTU you'd generate roughly another $5.4 million/year in revenue on a plant costing only about $300 million.  If you can boost that capacity factor to perhaps 80% using geological heat storage you kick that up to about $8.6 million/year; over a 40-year plant lifespan you generate over $340 million in heat sales on a $300 million investment, and that ignores the revenue from electricity.

Add even a $20/ton carbon tax (about $1/mmBTU of natural gas at the HHV value) and nuclear CHP becomes a no-brainer.