In its International Energy Outlook 2019 (IEO2019), the US Energy Information Administration (EIA) projects that world energy consumption will grow by nearly 50% between 2018 and 2050. EIA projects most of this growth will come from regions where the consumption of energy is driven by strong economic growth, particularly in non-OECD Asia.

EIA’s annual long-term assessment of world energy markets includes a Reference case and four core side cases, which use different assumptions for the projections in each case.

Energy consumption was greater in Asia than in any other region in 2018, and we project that consumption will almost double between 2018 and 2050, making Asia both the largest and fastest-growing region in the world for energy consumption. This long-term trend of Asian energy consumption to support growing economies strongly influences the extraction, refining, and transport of oil, natural gas, and other fuels.

IEO2019 contains energy consumption projections for 16 regions of the world. Projections for the United States in IEO2019 are consistent with those released in the Annual Energy Outlook 2019. EIA does not intend that the IEO2019 Reference is the most probable prediction of the future, but rather it is a baseline for estimating the effects of policy or technology changes. The other four cases show the effects of changing other key model assumptions.

Transportation. IEO2019 finds that in countries that are not part of the Organization of Economic Cooperation and Development (OECD), transportation energy demand increases 77% from 2018 to 2050 in the Reference case. A few countries, including China and India, have particularly large populations, and their energy consumption for both personal travel and freight movement grows much more rapidly than in many OECD countries.

In contrast, in OECD countries, improvements in vehicle fuel efficiency outpace projected increases in travel demand, and as a result, total projected transportation energy use for OECD countries declines by 1% from 2018 to 2050. 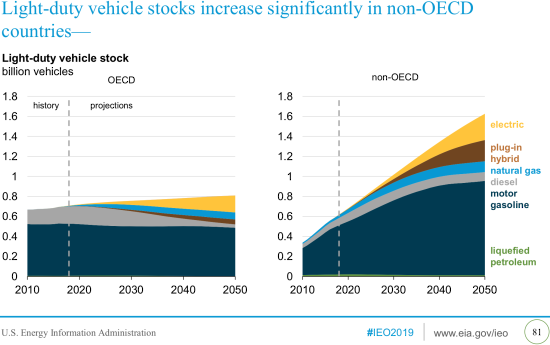 Other significant findings of IEO2019 include:

Manufacturing centers are shifting toward Africa and South Asia, especially India, resulting in energy consumption growth in those regions. According to EIA’s IEO2019 projection, the industrial sector, which includes mining, manufacturing, agriculture, and construction, accounts for more than 50% of global end-use energy consumption between 2018 and 2050. Economic activity for energy-intensive manufacturing, which includes production of iron and steel, food, paper, refined oil products, non-metallic minerals, aluminum, and basic chemicals, is increasingly concentrated in fast-growing economies of Asia. EIA projects India and China will account for more than half of global output from energy-intensive manufacturing between 2018 and 2050 in the Reference case.

Natural gas and petroleum product consumption is rising in Asia faster than supply is growing, potentially shifting global trade patterns and infrastructure investments. The economies in countries outside the Organization for Economic Cooperation and Development (OECD) account for nearly all of EIA’s projected growth in petroleum product consumption between 2018 and 2050 in IEO2019, as growing populations and economic growth result in increased consumption of energy. Non-OECD Asia accounts for about three-quarters of EIA’s projected global increase in liquid fuels consumption through 2050.

India, in particular, is projected to experience rapid industrial growth and increased demand for motorized transportation.

In contrast to energy consumption growth in Asia, EIA projects in the IEO2019 that crude oil production will be concentrated in the Americas, Russia, and the Middle East. Trade and infrastructure will have to shift to accommodate the projected production and consumption changes. Given these overall economic patterns, natural gas trade and infrastructure face similar shifts.

End-use consumption is increasingly shifting toward electricity. Electricity generation increases 79% between 2018 and 2050 in EIA’s IEO2019 projection as a result of increased electricity consumption in all end-use sectors.

Electricity will remain the main source of energy consumed in buildings. In the residential and commercial sectors, EIA projects that electricity use will increase as populations rise, commercial services expand, and standards of living increase in non-OECD economies, which, in turn, will increase the demand for appliances and personal equipment.

In OECD countries, policy initiatives tend to have a stronger effect on electric generation investment, and renewables meet most of the growth in electricity consumption as well as displace some existing generation. A mix of renewables and non-renewable generating technologies meets non-OECD electricity consumption growth, and this mix is generally influenced by regional resource and economic considerations.

This may be more than enough to curtain and/or reduce world population faster than expected?