Bloom Energy and Samsung Heavy Industries (SHI), a part of Samsung Group, today are collaborating to design and develop ships powered by Bloom Energy’s solid oxide fuel cell technology. Bloom Energy is the world’s leading provider of stationary fuel cells and SHI is one of the world’s largest shipbuilding companies. 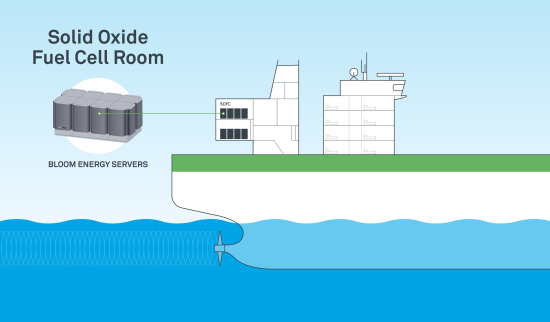 SHI aims to be the first shipbuilder to deliver a large cargo ship for ocean operation powered by fuel cells running on natural gas. Such an innovation will play a key role in helping the company exceed the 50% emissions reduction target, compared to 2008 levels, that the International Maritime Organization (IMO) has mandated all shipbuilders should achieve by 2050. The IMO, an arm of the United Nations, is the global standard-setting agency for the safety, security, and environmental performance of international shipping.

The two companies have already taken an important first step towards commercializing the maritime use of fuel cells for propulsion and auxiliary power.

At a ceremony in the SHI Geoje shipyard, Samsung Heavy Industries announced they have received Approval in Principle from DNV GL, the internationally accredited marine shipping registrar and classification society, in collaboration with Bloom Energy to proceed with a fuel cell-powered ship design for Aframax crude oil tankers (COTs).

As regulations to reduce GHG emissions take effect step-by-step, the introduction of fuel cells to vessels is inevitable. This approval, and being the first shipbuilder to secure this marine fuel cell technology, illustrates that Samsung Heavy is highly likely to lead the market.

It is a meaningful GHG emissions reduction measure to apply Bloom Energy’s fuel cell system to SHI’s new Aframax design. SHI’s new Aframax design is equipped with a new generating system in combination of the conventional, generator engines, and the new fuel cell technology, both fueled with LNG. This innovative design is one of the ways to improve GHG emissions, to further make LNG a solid and long-term solution.

Today, 80% of the world’s shipping fleet runs on heavy fuel oil, or bunker fuel. The combustion of this fuel to provide propulsion and auxiliary power to ships causes the marine transport industry to produce between 2% and 3% of global carbon emissions. If the global marine shipping industry was a country, it would be the sixth-largest producer of greenhouse gas (GHG) emissions in the world.

Replacing combustion-based power generation from bunker oil with electrochemical conversion of liquid natural gas (LNG) through fuel cells could have a significant impact on carbon emissions from marine transportation. Bloom Energy and SHI estimate that replacing oil-based power generation on large cargo ships, which require up to 100 megawatts of power per ship, could reduce annual greenhouse gas emissions from shipping by 45%.

Combustion of bunker fuel also emits sulfur and particulate matter that causes respiratory illness. A 2018 study found that health impacts due to pollution from shipping include 14 million cases of childhood asthma annually and 400,000 premature deaths a year from lung cancer and cardiovascular disease.

Bloom Energy Servers have been deployed hundreds of times on land including on-site at commercial and industrial businesses, counting 25 of the Fortune 100 companies. The same technology has been approved by DNV GL to be deployed aboard ships with minor modifications to suit ship installation and use in an enclosed environment.

Bloom Energy recently announced the capability of its fuel cells to run on hydrogen. As nations and ports develop their hydrogen infrastructure, fuel cell-powered ships could transition from natural gas fuel to hydrogen fuel and become zero-carbon and zero-smog emitters.

Try to construct an extrifuge generator. extrifuge mean, grabbing more energy on deceleration than on the acceleration. I discovered this in march of 2018 but not a single person wanted to hear me explain it. so as here in greencarcongress, theoricaly everyone is supposed to be interested in earning a living by paying less for their car ride. So you accelerate a wheel bolted to an electrical generator, the wheel is loaded with weight distribution in the center of it. You accelerate this wheel to very high rpm with a push than at max rpm you switch the generator at 'on' and you transfert the weights at the exterior edge of the wheel. So the system consume less energy on acceleration than on the deceleration, you transfect the electricity in batteries and condensors while you operate the car. So lets make a prototype. a car wheel bolted to an electrical generator. the wheel have 3 one kilo weight at 120 degree apart near the center, there is 3 guiding tubes to push the 3 weight suddenly when the maximum rpm is reached. So it take less energy to push the system from zero r.p.m to 10 000 r.p.m than from the deceleration from 10 000 r.p.m to zero. You then grab energy while driving your car if it is fitted with this extrifuge generator. Im interrested to show you some drawing, if you are interrested.

I also invented the c.c.p engine, to present a little later.

Gorr, you're still an id1ot.  As your weights moved outward on the wheel, they'd pull against the centripetal force holding them in circular motion and convert rotational energy to work.  Also, angular inertia of the system would increase and it would slow down as the weights moved out.  You cannot get something for nothing that way.

This is first-semester college physics.  Yes, you are literally too dumb to pass the intro-level courses required of physicists and engineers.  Now go crawl back under your rock before Michael Milliken forces you to again.

“You cannae change the laws of physics, cap’n.” - Montgomery Scott.

Why bother with LNG, why not go straight to hydrogen? Cheap H2 from electrolysis powered by renewable energy is supposed to be just around the corner according to Hydrogen Economy™ proponents. Ahh, "Hydrogen is liquified by reducing its temperature to -253°C, similar to liquified natural gas (LNG) which is stored at -162°C." Does that make it twice as expensive or an order it magnitude more expensive?