Researchers at Dalhousie University, led by Professor Jeff Dahn, have developed an excellent moderate-energy-density lithium-ion pouch cell chemistry that they say should be able to power an electric vehicle for more than 1.6 million kilometers (1 million miles) and last at least two decades in grid energy storage. An open-access paper in the Journal of Electrochemistry JES details the new cell and the testing to which the team subjected it to create a benchmark for further research.

In this paper, testing results on LiNi0.5Mn0.3Co0.2O2/artificial graphite (NMC532/AG) cells are presented. The NMC532 used in these cells is “single crystal” NMC532 as described in the papers by Jing Li et al. and Lin Ma et al. The artificial graphite (AG) used in these cells is provided by Kaijin (China) and is grade AML-400. Over the last 10 years the Dalhousie research group has tested a wide variety of Li-ion cells with various positive electrodes, negative electrodes and electrolytes. Of all the cells tested, the ones with the longest lifetime are the single crystal NMC532/AG cells with optimized electrolytes reported here. Therefore, we believe it is valuable to present a comprehensive summary of this test data for others to benchmark against. 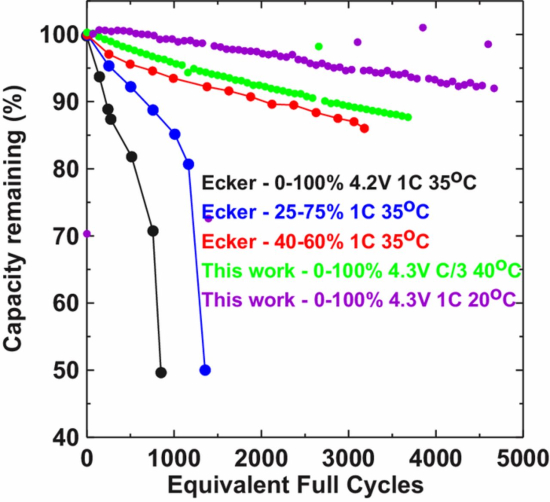 Long-term cycling data plotted as percent initial capacity versus equivalent full cycles for NMC/graphite cells. The data from Harlow et al. for 100% DOD cycling was collected to an upper cutoff potential of 4.3 V. The data from Ecker et al. used 4.2 V as 100% state of charge. The purple and green data (Dahn’s results) should be compared to the black data (Ecker et al.). Data for restricted range cycling (i.e. 25 - 75% SOC and 40 -60% SOC) for the cells in this work is not available but is expected to be far better than the data shown for 0 – 100% DOD cycling by analogy with the cells tested by Ecker et al. Credit: JEC, Harlow et al.

Full details of these cells including electrode compositions, electrode loadings, electrolyte compositions, additives used, etc. have been provided in contrast to literature reports using commercial cells. This has been done so that others can re-create these cells and use them as benchmarks for their own R+D efforts be they in the spaces of Li-ion cells or “beyond Li-ion cells”.

The cells described here have two dominant failure mechanisms at 20, 40 and 55°C. These are Li inventory loss and impedance growth. We find virtually no evidence for loss of active material in these cells during cycle testing under the conditions used here.

Dahn’s research team is delivering a series of lectures including information on new battery technology at the upcoming 236th ECS Meeting in Atlanta, Georgia (13-17 October).

The work was supported by NSERC and Tesla Canada under the auspices of the Industrial Chairs program.

What a load of cobblers.

They test under wholly artificial lab conditions which do not remotely approach on the road use and then claim or imply that this has something to do with real world usage.

Sure, if you have constant temperature and so on you might get a high number of cycles.

You aren't going to get it in your car.

“They test under wholly artificial lab conditions which do not remotely approach on the road use and then claim or imply that this has something to do with real world usage.”

Try re-reading it. What they explicitly suggest is that the data presented be used in lifetime modeling. Implicit in their explicit suggestion is the acknowledgment that the lab results are not equivalent to real world results.

The NMC532 battery chemistry looks interesting for use in PHEV applications (note: PHEV includes Range Extenders, e.g. Fuel Cells). If the voltage was reduced and DoD managed, >10k cycles could be achieved. The million miles are achieved in a 300 mile range battery. If this was 50-80 mile range PHEV, one could expect 500k miles with battery management.
Also, it should be pointed out that NMC532 is not a Tesla battery chemistry (Dahn works for Tesla). This battery chemistry would work well for Grid applications.
However, another thought would be that Tesla could be looking at a mixed chemistry battery similar to the Williams Advanced Engineering battery. Use NMC532 as the PHEV and add a low power density/high energy density Range Extender chemistry ,e.g. Metal Air or Conversion Cathodes. Tesla has patents on a setup like this.

While I love the implications of this, as an engineer I have to say that such a battery is over-specced for the application.  Most LDVs are never going to reach 200,000 miles so a million-mile battery is 5x overkill.  If there is a way to reduce the use of scarce and/or expensive materials (e.g. cobalt) at a cost of losing, say, 50% of the cycle life, it would make sense to go that way.

The semi could use it, the fuel savings would be offset by pack replacement.

I have read the tests, and analysis of them by battery experts.

I repeat, the notion that this applies to real world car batteries is cobblers, and pure propaganda designed to deceive, as Dahn has a track record of doing for instance in his farcical video from a few years ago which ludicrously pretended that cycle life of small microwatt batteries designed for medical implants were relevant to car batteries, Tesla ones, and misled people on that basis.

Dahn is proof that researchers will say anything for research grants.

Battery Evolution will continue and probably pick up speed after 2020.

There are several prototype batteries ready to embark that function without a single milligram of cobalt. I thought that you should know. As solid state cells become standard there is absolutely no need for cobalt.

Engineer-Poet, I understand that million miles is over kill based on current thinking. What if we changed our thoughts to think out of the box like, transferring my battery pack to my new car, which would reduce the cost of the new car? Therefore we can keep the battery pack for the million miles. Then it is NOT OVER KILL!

Most people drive on the order of 15,000 miles a year; a million miles would take literally a lifetime post-licensing to cover.  You want to restrict newer vehicles to the battery format used decades ago?  I don't see that going over too well, but go ahead and see what kind of traction you get.  There's also this little detail of interest on car loans.  Saving on the purchase price reduces the total cost of ownership quite a bit.

If you use such batteries in e.g. automated cabs which drive 100k or 200k miles a year, you can make a much better case for a million-mile battery.

These batteries are designed with autonomy in mind. They are not being developed for vehicles travelling 15,000 miles a year. With autonomous vehicles working 80-90% of the time they will have an expected lifetime of about eight to ten years.

E-P is correct this is over spec for an LDV and SJC is also correct about the Tesla Semi.
The biggest negative about the Tesla Semi was "battery longevity". A Commercial, long haul Semi could travel 125,000 miles in a year and requires an 8-10 year life, that is a million miles.