FAW will include the RS-LiDAR-M1 as a core component in its proprietary next-generation autonomous driving system development, therefore accelerating the serial production of the first automotive-grade solid-state MEMS-based Smart LiDAR Sensor to support Level 3 vehicle autonomy and above.

The final commercialized version of RS-LiDAR-M1 is an all-in-one unit MEMS-based Smart LiDAR Sensor for self-driving passenger vehicles with its own embedded AI algorithm technologies and SoC. It moves beyond the data-collecting function of traditional LiDAR systems to full data analysis and comprehension. 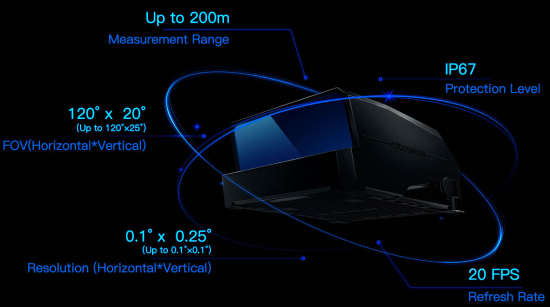 The RS-LiDAR-M1 not only collects and interprets high-definition 3D point cloud data, but its built-in AI algorithm and SoC also process road data in real-time, while at the same time synchronizing outputs of high-precision localization, obstacle detection, tracking and classification, road curbs and driving areas detection.

By contrast, when mechanical LiDAR is used on a vehicle, an ECU must also be used to run the algorithms. The RoboSense Smart LiDAR Sensor’s built-in SoC can largely reduce more power consumption while improving performance compared to automotive ECUs, saving much more passenger space at the same time.

The RS-LiDAR-M1 is designed in a streamlined body that allows it to be easily embedded onto any part of the vehicle for the complete aesthetics of automobile.

The RoboSense Smart LiDAR Sensor costs on the order of hundreds of dollars each, based on its deployment of MEMS micro-mirror scanning structure and simplified manufacturing and streamlines production, while maintaining high product quality and reliability to meet exacting OEM requirements.

China is standing at the front of the world’s autonomous driving development. Our cooperation with RoboSense demonstrates our confidence in Smart LiDAR Sensor for Level 3 vehicle autonomy and above, and accelerates the commercialized development of our proprietary next-generation autonomous driving system.

The closest to commercialized version of the RS-LiDAR-M1 will be used for FAW’s automotive-grade testing and self-driving passenger cars research development. The current version has greatly improved performance while reducing the size to only the half of the former demo showcased on CES 2019, which can be easily integrated into any part of the vehicle body. More details of the latest version will be coming soon.