Enzymes use cascade reactions to produce complex molecules from comparatively simple raw materials. An international research team has now copied this principle, and used nanoparticles to convert carbon dioxide into ethanol and propanol.

The scientists at Ruhr-Universität Bochum in Germany and the University of New South Wales in Australia transferred this mechanism of producing complex molecules in multi-step reactions to metallic nanoparticles, also known as nanozymes.

Transferring the cascade reactions of the enzymes to catalytically active nanoparticles could be a decisive step in the design of catalysts.

Enzymes have different active centers for cascade reactions, which are specialized in certain reaction steps. For example, a single enzyme can produce a complex product from a relatively simple starting material. In order to imitate this concept, the researchers synthesized a particle with a silver core surrounded by a porous layer of copper. The silver core serves as the first active center, the copper layer as the second.

Intermediate products form at the silver core then react in the copper layer to form more complex molecules, which ultimately leave the particle. 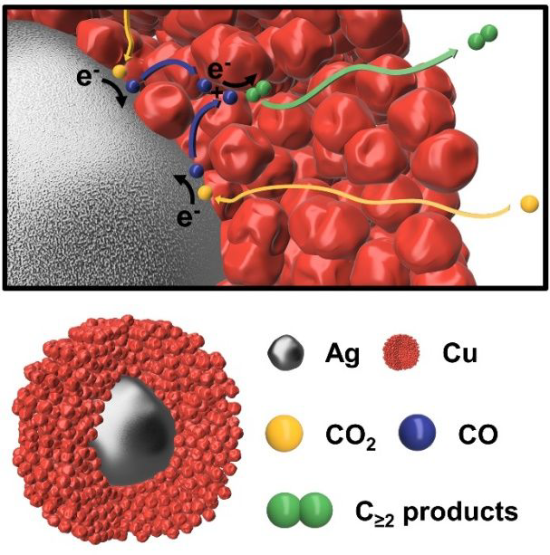 Cascade reaction mechanism on a Ag-Cu nanozyme for the CO2 reduction reaction (CO2RR). The researchers propose that the cascade reaction mechanism is: (i) diffusion of CO2 through the porous Cu-shell to the Ag-core, (ii) adsorption of CO2 on the Ag surface, (iii) proton-coupled reduction of CO2 to CO, (iv) desorption of CO and diffusion through the porous Cu-shell, (v) adsorption of CO on the Cu channel walls, vi) proton-coupled bimolecular reduction of multiple CO molecules to C≥2-products and vii) desorption and diffusion of C≥2-products to the bulk of the solution. Credit: ACS, O’Mara et al.

In the present work, the German-Australian team showed that the electrochemical reduction of carbon dioxide can take place with the help of the nanozymes. Several reaction steps on the silver core and copper shell transform the starting material into ethanol or propanol.

There are also other nanoparticles that can produce these products from CO2 without the cascade principle. However, they require considerably more energy.

The researchers now want to further develop the concept of the cascade reaction in nanoparticles in order to be able to selectively produce even more valuable products such as ethylene or butanol.

This piece omits what is IMO very important information, how the reaction is driven and what happens to the oxygen product of reduction.  Turns out the supplementary information reveals that the process is electrolytic, with the nano-catalyst being suspended on carbon cloth.  Oxygen is obviously liberated as hydroxyl ions and carried to the positive electrode, where it is converted to gas and water.