This is the latest of my occasional updates on retrospective, long-term trends in U.S. vehicle fuel economy. Specifically, this study examines actual fuel economy of cars and light trucks (pickup trucks, SUVs, and vans) from 1966 through 2017.

Calculated vehicle fuel economy is available going back to 1923. However, the starting year of this analysis is 1966 because (1) for 1923 through 1935, fuel-economy information is available only for the entire fleet of all vehicles, and (2) from 1936 through 1965, light trucks were included with other trucks in the relevant statistics.

The primary measure in this analysis is the average miles driven per gallon of fuel for each year. For 1966 through 1985, fuel economy was calculated from the information in a summary publication by the U.S. Department of Transportation. Annual statistics from the U.S. Department of Transportation were the sources of the information for 1986 through 2017.

The graph below shows the changes in actual vehicle fuel economy from 1966 through 2017. 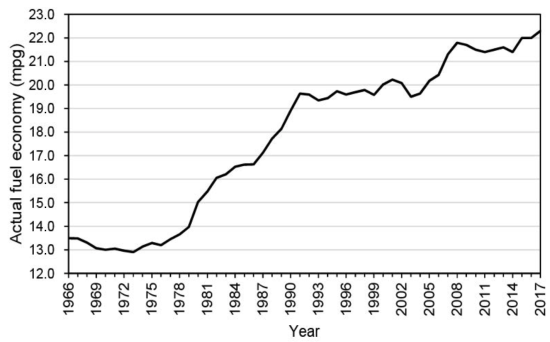 The measures used in the present analysis (miles per gallon of fuel, and gallons of fuel per 100 miles) do not allow us to make direct inferences regarding changes over time in total energy consumed (e.g., total Btu). This is the case because the analysis did not take into account the following factors and their changed contributions over time: greater energy content of diesel than gasoline, lower energy content of ethanol blends than pure gasoline, lower energy content of biodiesel blends than pure diesel, and electric energy consumed by plug-in electric vehicles. (Concerning the latter: Even if all 755,000 plug-in cars and light trucks that were sold in the U.S. through December 2017 were still on the road, they would represent only about 0.3% of all registered cars and light trucks in 2017.)

USA and the world will have to do much more to reverse the trend and burn less bio and fossil fuels to reduce pollution and GHGs and global warming.

CPPs and NGPPs should also be progressively phased out in favour of REs + storage and electrified vehicles.

it is a bit sad that with all our technology, we have made very little progress since 2007.
I suppose it is that so few new cars have been bought - too many trucks and old cars.
@harvey, I'd keep the nukes going as long as I could.
But I'd dump the coal and add wind and solar, balancing it with hydro, nukes and gas when required.

@SJC, indeed. It is a pity people won't buy them.
Bringing gas tax to European levels might solve that one.

The solution to that problem is a requirement that, by 2025, all new LDVs sold must burn not more than 1 gallon of fuel in their first 50 miles of travel, starting with a fully-charged traction battery (if present).  Emissions testing would have to be done starting with the battery flat, of course.

That would deal with most of the problem right there.  People would start plugging in all the time, and plugs would appear everywhere.

One of the solution, for USA's larger vehicles market, may be (as favoured by SAEP) improved much lighter FCEVs with standardized 2 to 8 plug in battery packs, for the first 20 to 100 Km and a small Pinnacle ICE generator or FC for extended range?

Owners/users could add the optional extra (nos 3 to 8) battery packs at a latter date to extend the e-range as required?

We don't want to be a "nanny state" where mandates force people.
I expected hybrids to sell 10% twenty years after the Prius,
guess not.

@SJC, that was your head speaking, not other people's hearts.
Note, that even in Europe, where we have expensive petrol, Prii (and all hybrids) have not sold that well. Probably because Toyota have only now made their patents available at a low price, and of course diesel.
Lots more hybrids being sold now that Toyota has made the patents available, but maybe too late to hold back the BEV wave.

Toyota hardly had a monopoly on hybrid transmissions.  The patents shouldn't have stopped anyone; I have so far only seen one patent-protected invention (a terrain-mapping system by Honeywell) that I or my employer could not work around with relative ease.

You nor I know what "other hearts" hold.
We only know what hybrid sales have been, the facts.

We know which manufacturers made a few desultory efforts to meet mandates, and which ones were serious about hybrids.