Conventional oil and gas discoveries during the past three years are at the lowest levels in seven decades and a significant rebound is not expected, according to a new report by global business information provider IHS Markit.

The low levels in discoveries come as a result of a pullback during the past 10 years in the wildcat drilling that targets conventional oil and gas plays—most drastically after oil prices collapsed in 2014. The report, entitled IHS Markit Conventional Exploration Results in Early 2018 Through 2019: No Rebound in Activity or Results says that these trends have far-reaching implications that could limit future conventional reserves additions. 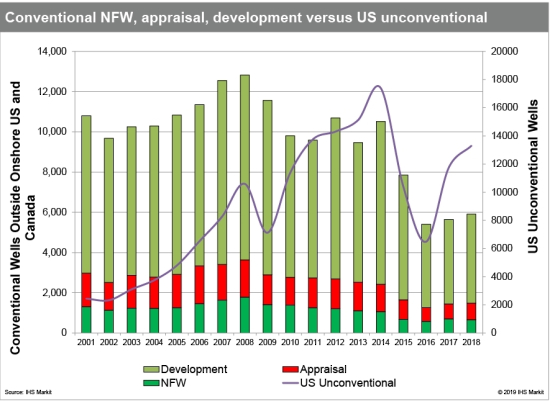 The decline in conventional discoveries was not only driven by low oil prices, but by competition from short cycle-time unconventional projects, and by financial investors who question long-term, high-cost, frontier projects, the report said. These factors, in turn, shifted drilling away from areas where potential discoveries could be larger, and reduced upstream exploration investment due to concerns about long-term oil demand.

One of the main drivers here is the shift of investment by US independents from international exploration to shale opportunities in the United States—shorter cycle-time projects—with greater flexibility to respond to changing market conditions. These operators can quickly turn an unconventional project off and stop or postpone drilling next month if oil prices fall.

In addition to the overall reduction in conventional drilling, the IHS Markit report identified additional reasons for the modest exploration results in recent years. One of the most telling is that the average discovery size of conventional fields varies greatly with the maturity of the basins being explored.

Despite the larger discovery size associated with these deeper water and frontier/emerging basins, operators are drilling fewer wells in these areas. In 2014, 161 new field wildcats (NFW, exploratory oil wells drilled in unproven fields) were drilled in deep and ultra-deep water; by 2018 that number dropped to 68 wells, IHS Markit said. Drilling in frontier/emerging-phase basins declined by a similar amount.

In the current risk-averse environment, the industry prefers drilling in mature basins, near existing infrastructure, where operators can bring a project online in 2 to 3 years, IHS Markit said.

The industry will likely continue to invest more in less costly, less risky, quicker cycle time projects in the onshore and shelf, with deep-water investment remaining constrained. There will be areas of intense activity in the deeper water depths and in frontier and emerging-phase basins as well, but overall, these areas will only see incremental gains.

IHS Markit said some of the larger E&P companies and a few E&P independents with better track records continue to pursue selective deep-water exploration, but this does not offset the industry trend in the aggregate.

IHS Markit sees other confounding issues that could continue to suppress the discovery of conventional resources. First, there are fewer conventional new field wildcat wells being drilled globally—in the US alone, they have declined by 60% since 2009. Second, the percentage and absolute number of these wells drilled in areas with the largest discoveries has declined relative to areas with smaller discovery sizes.

However, despite these significant challenges for conventional activity, there is always some chance that these trends could be reversed.

Lackluster financial returns from unconventional production onshore in North America may drive more operators back to conventional exploration in the longer-term. Offshore companies have been able to substantially reduce the costs of building and operating offshore facilities necessary to develop resources in deeper waters. This renewed competitiveness could rekindle interest in conventional exploration where larger discoveries are made.

Or, it could push the change to a renewable future.

The world will not go off coal-oil and gas fossil fuels for lack of it but to reduce pollution and GHGs. REs with 24/7 storage and electrification will progressively replace most fossil and bio fuels. A progressive $100+/ton carbon tax may be required.